On Christmas Eve and Christmas Day in 1919 a tidal wave of patients began showing up at the hospitals in Western Massachusetts and Connecticut. They suffered from delusions and blindness, and in some cases they had already died. Joseph Kania of Chicopee Falls, Mass., was one victim of the Christmas Eve massacre.

On Christmas Eve, Kania finished a shift at the tire plant and, on his way home, stopped into the American House for a drink. In World War I, wartime restrictions on alcohol had stopped the sale of anything but extremely weak booze. Nationally, Prohibition loomed. Word spread through town that a batch of good whiskey imported from France had arrived in the Connecticut River Valley. Kania, a husband and father of two, was among dozens of people lured into local taverns for a snort – perhaps their last before Prohibition. But what they thought was fancy French whiskey was actually wood alcohol shipped to the state by a gang of New York mobsters from the Italian section of Brooklyn.

John Romanelli, the “king” or “mayor” of Brooklyn’s Little Italy, was an undertaker. He had connections throughout the community. Police suspected that he might be the man to go to if a gang killed an enemy and wanted the body disposed of without too much fuss. He would, in 1928, conduct the spectacular funeral for his nephew Michael Abbatemarco, a gangster and bootlegger gunned down in a mob war. Romanelli generally managed to keep a low profile. The one occasion when he drew attention to himself came in 1915, when he and his gang attacked a rival undertaker. They fought over who would bury an eight-year-old boy who drowned in a canal accident.

In the 1915 brawl, which police broke up, Romanelli suffered a bullet wound. He received a fine for illegally carrying a weapon. His rival undertaker wound up dead.

Step forward to 1919 and Romanelli wanted a piece of the bootleg liquor business about to explode. As an undertaker he had access to wood alcohol, an ingredient in embalming fluid. He knew of a shipment in a New York warehouse, headed to Europe. 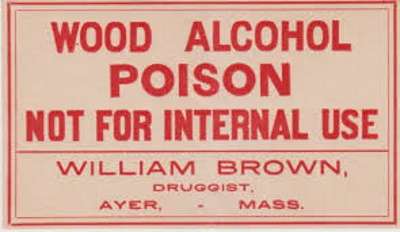 Romanelli and a group of accomplices sneaked into the warehouse on December 20 and hauled away two barrels of wood alcohol. Working in a garage with the help of a local druggist, they drained the barrels into whiskey casks. They refilled the original barrels with water and replaced them at the warehouse for shipment. Then the men added color to the wood alcohol, to make the clear liquid look like whiskey, and poured it off into bottles with fake labels.

The bottles were then shipped to Hartford and made their way up the Connecticut River Valley. It didn’t take long before the trouble started. Men who drank the phony whiskey were turning up dead in their beds.

In Connecticut, 13 died in Hartford, two in Meriden and two in Thompsonville. The death toll was higher in Massachusetts. At least 45 died in Chicopee, 10 in Holyoke, three in Hadley and one in Greenfield.

Others, who drank less of the stuff, survived but were sickened. The word spread rapidly about where the liquor had come from and who distributed it.

When police caught up with one of Romanelli’s accomplices, he begged them to arrest him. “I’m glad you got me,” he said. “For God’s sake don’t send me to Connecticut. I am an innocent man…it would mean certain death.”

Police arrested Romanelli in New York, caught red handed with some of the stolen alcohol. Prosecutors charged him with grand larceny. Police waited for a New York case of poisoning to surface so he could be charged with murder, but it never emerged. All the known victims of the Christmas Eve massacre lived in Connecticut or Massachusetts.

It’s not clear how many people died from the phony whiskey. Some accounts said 97, while others said well over a hundred. Many more suffered injuries, but survived. In Massachusetts and Connecticut, prosecutors brought charges of murder. The states, though, had weak extradition laws at the time, and Romanelli cooled his heals in a New York jail.

He complained bitterly that the police destroyed his undertaking business. They framed him for the Christmas Eve massacre, he insisted. But no one bought his act. He received a sentence of three to seven years in Sing Sing prison for larceny. But what of all the dead men left in the wake of his crimes? He could never be brought to justice from New York. The court did convict Carmine Lizenziata, the Romanelli associate who actually drove the liquor over the state line. He received a sentence for 18 years in prison. But he fled the country for Italy.

Prosecutors, meanwhile, claimed they couldn’t touch Romanelli for the murders. The mob kingpin left prison after serving just two years for the Christmas Eve massacre. The prosecutor then described the conundrum. Extradition, he said, was only used for people who committed a crime and then fled the state.

“A man may stand within the confines of one state and fire a cannon into another, killing a thousand persons, without laying himself liable to extradition to the state in which the deaths actually occurred,” the prosecutor explained.

“This is exactly what happened in the Romanelli case, except that the Brooklyn killers used alcohol instead of a cannon.”

This story about the Christmas Eve massacre was updated in 2022.

A Poorhouse in Each New England State

Hi Becky, there are lists in most of the newspapers at the time. This was a big enough story that many newspapers right across the U.S. had some sort of article about it. As well, many of the articles included lists of the victims. Search newspapers from December 26th 1919 to early January in 1920 especially in Massachusetts, New York and Connecticut and you’ll references to the events that took place. My great grandfather was one of the victims. Good luck!

My grandfather was one in chcopee MA, grew up knowing the story but not the source until now?