German POW Franz Bacher escaped the World War II prison camp in Northern New Hampshire on Aug. 1, 1944, eluding a manhunt for more than a month. Whether he was recaptured by clever FBI detective work or by a chance encounter is still a mystery. He was one of 425,000 prisoners of war incarcerated in 700 camps inside the United States during World War II. Most of the POWs were German, and many of them weren’t Nazis.

New England had more than a dozen prison camps during the war.  In Massachusetts, prisoners were held in Boston when they arrived, while wounded POWs went to hospitals and anti-Nazis imprisoned at Fort Devens. Others went to Camp McKay, Westover Field, Camp Edwards on Cape Cod and Camp Andrews and Fort Strong in Boston Harbor.

They were held at Bradley Field and at Fort Kearny in Connecticut. In Maine, they went to Camp Houlton, Hobbstown, Princeton and Seboomook.

German POW Franz Bacher went to northern New Hampshire to cut down trees in the tiny logging town of Stark, named after Revolutionary War hero John Stark. It was Stark, ironically, who gave the state its motto, “Live Free or Die.”

Many prisoners escaped from Camp Stark, only to return after finding that living free meant subsisting on berries in the woods.

Franz Bacher got farther than most.

By then a Berlin, N.H., paper firm called the Brown Company had a worker shortage. The company managed to hire and retain only half of the 2,000 men it normally employed. The workers either served in the military of found more lucrative jobs in Massachusetts and Connecticut defense plants. The Brown Company couldn’t meet its quota of pulpwood needed for the war effort. In July 1943, the Brown Company began talks with the federal government about getting German POW labor.

The government made one exception, though. Prison labor was forbidden by the Geneva Conventions, but the labor shortage was so acute the rules were bent. German POWs went to work.

Since it was impractical to transport workers long distances to work, the POW labor camps were located near the worksites. In Maine, for example, German POWs cut wood for paper companies and harvested potatoes for farmers who had plowed under crops when they had no help.

The Brown Company eyed a closed Civilian Conservation Corps camp in Stark as a place to house prison laborers. The camp was hastily renovated for the German POWs.

In April 1944, a train brought to Stark about 100 German prisoners wearing  GI fatigues with ‘PW’ painted on their pants and shirts. The prison camp and the town coexisted peacefully. Some of the soldiers sent to Stark as guards married local women and settled down in the North Country. They came to church suppers, or to people’s homes for Sunday dinner or a holiday meal. A Groveton woman contributed new furniture to the camp so the soldiers could have a lounge.

One U.S. serviceman hitchhiked to the camp with a case of beer on his shoulder. A car carrying the wives of the camp doctor and company commander picked him up. Neither ratted him out. The medical officer broke the rules and provided penicillin to the children of Stark. Wives and girlfriends of soldiers were welcomed into the mess hall.

That spirit of cooperation eventually extended to the prisoners. Some of the people of Stark came by the camp to bring small gifts to the POWs. The guards sometimes picked up saws and helped them meet their daily quota of pulpwood. Franz Bacher sketched pictures of the guards and painted portraits of the townspeople. Some of his paintings of the North Country still hang from walls of homes in Stark.

Like most of the Camp Stark prisoners, Bacher had been a political prisoner in Nazi Germany before being sent to North Africa to fight. He was a 27-year-old Austrian, a leftist who spoke four languages, an artist who had won some acclaim. He hated military life and he hated cutting wood.

Fortunately for Bacher, Camp Stark was one of the least secure prison camps in the United States. It was nearly impossible to prevent the men cutting down trees from escaping into the woods.

Escapees, though, couldn’t go back to Germany. To the east, the Atlantic Ocean separated them from Europe.  To the north and south they would encounter U.S. allies, Canada and Mexico.

While in the camp, Bacher had obtained U.S. currency and a civilian jacket. He painted ‘PW’ with watercolor on the back of the jacket. He wore the jacket to work on August 1, hid in the brush and then washed the paint off in a stream before hiking 20 miles to Jefferson, N.H.

Prison officials found a note on his bed.

I am going to escape today. The reason I am doing this is I live for my art. If I continue to cut wood, my hands will become so mutilated that I will be unable to paint. If I can’t paint, I can do nothing.

In front of one of the big resort hotels in Jefferson, Bacher climbed aboard a bus and headed for New York City. He sold pictures he painted of Central Park, where he slept for a while until he had enough money to rent a room in the East Village.

One day in October, Bacher was walking through Penn Station when he encountered Sgt. Ted Tausig, the U.S. Army interpreter at Camp Stark. Tausig, an Austrian Jew who had escaped the Nazis, came to America and joined the Army. Bacher and Tausig had lived a few blocks away from each other in Vienna. In Camp Stark, they became friends.

Tausig was on three-day leave from the prison camp. In Penn Station, he and Bacher chatted, then parted.

A few days later, FBI agents arrested Franz Bacher at an art supply store in Union Square. According to one version of the story, he had tipped off authorities by asking for a brand of paint known to German artists. According to another, the FBI had circulated his photograph to art supply stores in New York City.

Had Tausig turned him in? Bacher didn’t think so. But Tausig later said he didn’t have a choice but to turn him in. In Stark Decency, historian Allen Koop speculates Tausig may have waited a few days before making the call. 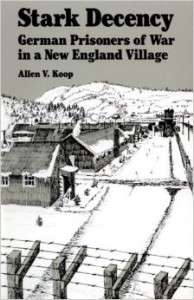 The book about the German POW camp

The military sent Bacher to Fort Devens, and then to Fort Eustis in Virginia for a six-day course in democracy before he returned to Germany. The Nazis had imprisoned Bacher for his support of democracy, and the U.S. military government in Germany offered him a job. He declined.

When the German POW camp finally closed in 1946, some of the prisoners who had lost their homes and families in Germany wanted to stay in the United States. The War Department insisted on sending them back.

If you enjoyed this story, you might also want to read about the top-secret re-education camp in Rhode Island during World War II here.

With thanks to Stark Decency by Allen V. Koop. This story about the German POW camp in New Hampshire was updated in 2022. Image of Stark By AlexiusHoratius – Own work, CC BY-SA 3.0, https://commons.wikimedia.org/w/index.php?curid=26455465.

[…] taking their jobs and their women. Most famously, she would visit U.S. soldiers in hospitals and POW camps to record them giving greetings to their families back home, assuring family and friends of their […]

I just read the article about the German POW camp in Stark Maine & the life they had in captivity, my family lived in Miami Beach during the war & German prisoners mostly from the North African Campaign were housed in the Miami area & during their break time from cleaning up the city of Miami Beach they were allowed to go swimming in the ocean at 2 designated public beaches until the World Congress of Jews complained to the government that enemies of the U S were enjoying use of our beaches & the practice was stopped. Many local girls were smitten by the blue eyed blond German POW’s quietly some encounters occurred but were kept quiet both by the camp personnel & the female purpertrators. Of course that was then & this is now

Maine? Stark is in NH

My wife and I read the history of the Stark POW camp and were moved to visit the area and see the location. We were very disappointed to see that it was overgrown with tall grass and small trees. There was no indication that anything was there except a sign on the side of the road explaining the fact. I would thiink that someone would clear out the brush and mow the fields every year or so to preserve the location for interested tourists. I don’t know if there is a reason for this or if it is neglect due to lack of interest but it seems such a shame that there is not some kind of indication that this place existed other that just a sign on the side of the road.

[…] would serve time in the Andersonville Prison in Georgia – the Confederate-run prisoner of war camp. Nearly one-third of the 45,000 Union soldiers sent to Andersonville died there. Corbett was […]

[…] He then tended to wounded soldiers at the Battle of Aachen, the Battle of Hurtgen Forest and the Battle of the Bulge. Germans captured him after he crossed the Rhine on the bridge at Remagen. A month later, American troops liberated the POW camp. […]