Green Mountain Boy Seth Warner might have been a forgotten Revolutionary War hero had he not appeared in an 1839 romance novel. The story had it all: heaving bosoms, manly countenances, hardy sons of liberty, deadly strife and shocking racist descriptions of Indians.

Seth Warner for decades was the unsung hero of the Battle of Bennington, rescuing New Hampshire’s John Stark from a rout. He also led a successful rearguard action at the Battle of Hubbardton.

Stark got all the plaudits for Bennington (actually fought in Walloomsac, N.Y.). But then, 52 years later, New England’s best-known novelist wrote a popular adventure story featuring the noble, brave and handsome Charles Warrington – Seth Warner. “Warrington” fights gallantly at the Battle of Hubbardton and gets the girl, aka the “rosebud in the wilderness.”

The author, Daniel Pierce Thompson, not only rescued Seth Warner from obscurity, he stamped the Green Mountain Boys on the national consciousness. He also probably taught Danielle Steele a few tricks. General Stark at the Battle of Bennington (NYPL). No Green Mountain Boy in the picture.

At the Battle of Bennington on Aug. 16, 1777, John Stark’s patriots routed a detachment of soldiers fighting under British Gen. John Burgoyne. After the redcoats retreated, the patriots’ discipline broke down. The men scavenged for valuables among the captured and killed troops. Some laid down and rested, while other tended to the wounded.

But then a second detachment of Burgoyne’s troops arrived and began to pummel the patriots. Stark came close to calling for retreat when Seth Warner arrived with 350 fresh troops and supposedly said, “Stand to it, my lads; you shall have help immediately.”

Bennington helped turned the tide of war. Casualties convinced the Indians to abandon the British. They also contributed to Burgoyne’s loss at Saratoga, which convinced the French to join the patriot war effort.

Stark won renown as the hero of the Battle of Bennington, and people in New Hampshire can still quote his words at Bennington, “”There are your enemies, the Red Coats and the Tories. They are ours, or this night Molly Stark sleeps a widow!” (They also remember Stark’s other famous quote, “Live Free or Die!”)

Decades after the Battle of Bennington, several prominent Vermont writers thought Seth Warner deserved more credit for saving the day. Daniel Pierce Thompson belonged to that group. And so he wrote a romance novel, The Green Mountain Boys. You can still buy the book!

The author introduces Seth Warner as Charles Warrington, in the full bloom of vigorous manhood. He opens the novel as a Green Mountain Boy captain, evading the Yorkers who seize the property of settlers with grants from New Hampshire.

The “maliciously smiling” Yorkers declare Warrington an outlaw, “poltroon,” “audacious scoundrel” and “bold rascal.: ‘Warrington’ at the same time cautions, “the storm of a new war is gathering over us.” (That would be the American Revolution.)

There’s a girl, of course – a “rosebud in the wilderness.: Warner/Warrington, though, can’t yet storm the citadel of her womanhood because there’s a”‘hedge about her too high for his leaping.”

The Green Mountain Boy roams the woods one day when he stumbles across “a young lady of the most interesting exterior” attempting to escape a rude fellow who grasped her garment.”

“Back, ruffian, back!” exclaims Warrington. “Unhand the lady, or you die on the spot!”

One can only imagine Seth Warner rolling over in his grave.

In the novel, traitors leer, maidens blush, rapiers deliver finishing blows and redcoats retreat like scampering satans. Indians fare poorly; the good ones are still savages or red scamps, the enemies are hell-hounds. 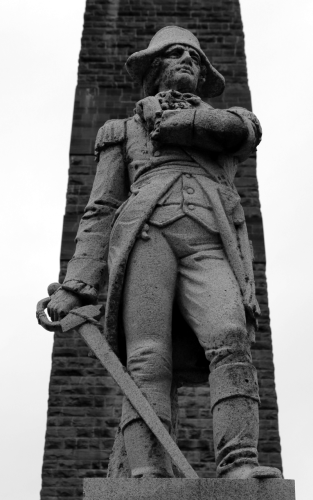 Observers gaze in “silent awe” upon the “grand and thrilling spectacle.” The maidens, of course, watch with heaving bosoms as the Green Mountain Boys “unflinchingly engage in deadly strife” with the “gorgeous and disciplined bands of their outnumbering foes.” The “fires of a thousand death-tubes blaze fiercely.”

The British bring reinforcements, though, and in stilted language one observer says, “There is no hope, then, that our troops can long withstand this fresh and formidable onset.”

One of the characters asks if a colonel died in battle by saying, “Has that noble fellow then indeed been added to the honored catalogue of martyrs in our glorious cause?” (“Did he die?” would have served the purpose just as well.)

Daniel Pierce Thompson skips the Battle of Bennington, perhaps because the novel approached 400 pages. So when “nature was again enrobing herself in the leafy glories of summer,” he quickly summarizes the battle. It “immortalized the name of the Roman Stark” and “covered the Green Mountain Boys with deathless laurels.”

Warner/Warrington gets the girl in the end. At their wedding he wears his lace-trimmed uniform, she is “richly and tastefully dressed” in an array of spotless white. They utter their vows in tender pathos. Then the ultimate Green Mountain Boy, Ethan Allen.  Two more Green Mountain Boys marry their blushing maidens. Then they all presumably live happily ever after.

You can read the whole book here.

His action and adventure stories sold well into the 1900s, but Daniel Pierce Thompson had day jobs as well. A Montpelier lawyer, he also held a number of political posts including probate judge and secretary of state. He cofounded the Vermont Historical Society and joined the Republican Party early in its life. 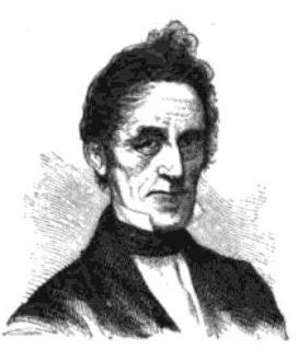 Thompson was famous in New England for his novels through the 1840s and 1850s until Nathaniel Hawthorne eclipsed him. He died in 1868. Supreme Court Justice William O. Douglas was descended from him.

Loyalists and Patriots: Mary Munro Sent Packing to Canada During the Revolution