What better way to take in New England’s fall foliage than a historic train ride? There’s no danger of running off the road while taking in the beauty wrought by Mother Nature’s paintbrush.

New England has more than two dozen so-called heritage railways, museums on wheels that recreate the experience of train travel during the golden age of passenger rail.

Here then are six heritage railroads that offer passengers a historic train ride, one in each New England state. If you have other favorites, please include them in the comments section.

Back in the day, travelers often journeyed by train to a steamboat landing, then continued on their way by water. Alas, only one steam-train-and-steamboat trip remains in the United States: in Essex, Conn.

The Essex Steam Train & Riverboat ride Is also only one of two in the world. It’s part of the Valley Railroad, which formed a century after the Connecticut Valley Railroad started regular train service in 1871. For a while it operated as a branch line of the New Haven Railroad. By 1961 the New Haven Line declared bankruptcy and all service finally stopped in 1968. The New Haven Railroad became the Penn Central (later Amtrak), and Penn Central gave the Valley track to the state of Connecticut, which leased it to a group of volunteers.

The Essex Steam Train & Riverboat ride runs from May through October. The 2-1/2-hour historic train ride begins at the Essex Station, built in 1892. It then runs for a 12-mile round trip through the quintessential New England towns and unspoiled parts of the Connecticut River Valley.  Passengers aboard the 1920s-era coaches will see Selden Neck State Park, Deep River and Chester.

Then comes an hour-long riverboat ride along the Connecticut River on the Becky Thatcher, where passengers will see Gillette Castle, Goodspeed Opera House and Haddam Swing Bridge.

Check the calendar here for dates. Antique rail cars take passengers on a 90-minute trip through 13 miles of wetlands and woods, where passengers may see fox, bald eagles, bear, osprey and moose. Many of the same sights the rusticators saw when they took the train to their summer cottages in Bar Harbor.

The Downeast Scenic Railroad started as the Calais Branch line, built in 1884 as the Maine Shore Line Railroad. Later the Maine Central Railroad Co. bought the line, but closed in 1985. It stayed closed for 30 years.

Then five local businessmen formed the Downeast Rail Heritage Trust in 2005. The next year they leased 30 miles of track from the state of Maine. Volunteers restored the rails, an engine, passenger cars and caboose. Service restarted on July 24, 2010, when invited guests took a historic train ride along five miles of track from Ellsworth. The Cape Cod Central coming ’round the bend

The Cape Cod Central Railroad offers a historic train ride along 27 miles of track from Hyannis to Buzzards Bay.

It’s a remnant of the first train on the Cape, built in the mid-19th-century to carry freight to and from the Boston and Sandwich Glass Co. Eventually the railroad carried passengers between 14 of Cape Cod’s 15 towns. Then in 1935, the Buzzards Bay vertical train lift extended the railroad across the Cape Cod Canal.

The Shoreland Excursion takes passengers on a two-hour historic train ride past salt marshes, sand dunes and cranberry bogs, then along the canal.

They’ll also see historic railroad buildings, including the West Barnstable station and the Buzzards Bay dispatch tower, both built in 1911. In Bourne, the Gray Gables Station, built in 1892 for Grover Cleveland’s personal use, now serves as a rail museum.

The railroad, which runs from May to October, also offers brunch trains, dinner trains and special excursions. For a schedule click here.

The railroad once belonged to the Boston & Maine Railroad and brought tourists to lakeside resorts from the Gilded Age to the 1950s. Today, the Winnipesaukee Scenic Railroad still goes through the front yards of gracious old summer homes. 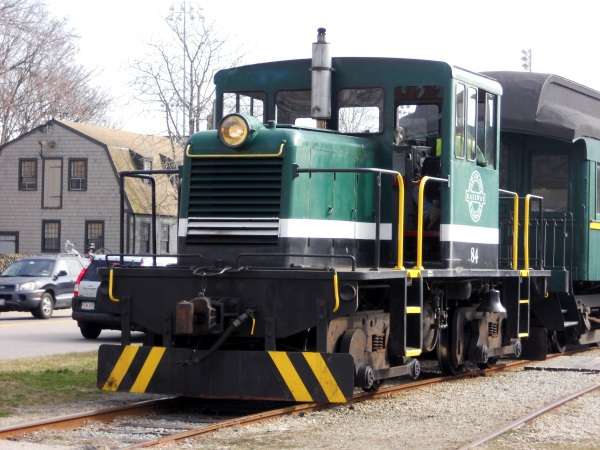 A locomotive during the Old Colony and Newport Railroad days.

The railroad once belonged to the Old Colony Railroad, a major system running from Boston to southeastern Massachusetts, Rhode Island, Lowell and Cape Cod. In 1976, then-owner Conrail sold the railroad to the state, which then leased it to the volunteers who ran the Old Colony and Newport Scenic Railway.

The new railway formed in 2014 when the for-profit Newport Dinner Train and the nonprofit Old Colony and Newport Scenic Railway merged. It runs between the Melville Marina section of Portsmouth and downtown Newport.

Today, Rhode Island’s only heritage railroad also offers dining experiences, as it has a kitchen car and chef.  The Grand Bellevue Rail Dining Experience, for example, offers a two-hour, multiple course, formal dinner with live music. Other themed excursions include such excursions as the Autumn Harvest Bistro train, Lunch with Santa and Murder on the Bellevue Express. During five weeks of New England’s glorious foliage season, the Green Mountain Flyer runs five days a week from Chester, Vt. Passengers can take a historic train ride on a Fall Foliage Excursion, a Cocktails on the Rails trip or a Green Mountain Dinner in a restored dining car.

Blount died in an airplane crash in 1967 but his dream lived on. Today, the Green Mountain Railroad is part of the 350-mile Vermont Rail System. The Green Mountain Flyer, named after the fastest train on the Rutland Railroad, runs for 13 miles between Bellows Falls and Chester along woods, the Williams River and the Brockway Mills Gorge. In the fall, a foliage excursion takes passengers another 14 miles to Ludlow. For a schedule, click here.

The Surprising German U-boat Visit to Newport, RI, During WWI