Adrian is known as the man who designed the most famous shoes on the planet, but he also deserves credit for padding the shoulders of virtually every American woman during the 1940s. A costume designer from Naugatuck, Conn., he worked with some of the biggest stars of Hollywood’s golden era.

He created Joan Crawford’s signature look both on- and off-screen, including the padded shoulders that defined women’s fashion in the 1940s.

“Who would have thought that my entire reputation as a designer would rest on Joan Crawford’s shoulders?” he once said.

Actually, his reputation rested on something else. He designed Dorothy’s ruby slippers.

He was born Adrian Adolph Greenberg on March 3, 1903. His parents, Gilbert and Helena Greenberg, both had Jewish immigrant parents. His father’s parents came from Russia, his mother’s from Bohemia and Germany.

They were the only Jewish family in predominantly Catholic Naugatuck. Throughout his life, Adrian avoided drawing attention to his Jewish heritage, calling himself a ‘New Englander.’ He eventually dropped his last name and took his father’s first name, so he was known as Gilbert Adrian.

Adrian’s parents owned a milliner’s shop, and he grew up amidst fabric, ribbon, feathers and hats. His parents dreamed he would graduate from Yale Law School, but he had more interest in fashion and art. He illustrated Edgar Allan Poe stories when at the age of five, and he helped out at the hat shop after high school. In 1921, the Parsons School of Fine and Applied Art in New York accepted him. During his first summer vacation, he got a job designing costumes for the Gloucester Playhouse.

He later spent four months at Parsons’ Paris branch, where he designed a gown for a costume ball that caught Irving Berlin’s attention. Berlin invited him to design costumes for his Music Box Revue in New York City.

He didn’t contribute much to the show, but Natacha Rambova, Rudolph Valentino’s wife, invited him to Hollywood to work on her husband’s film. Adrian bought a white suit and a black cape lined in red satin and headed west.

He was 24, charming and confident. Soon he was designing costumes for Cecil B. DeMille’s The King of Kings. Louis B. Mayer gave him work designing startling and unusual costumes for Greta Garbo. He created a Eugenie hat for Garbo in the film Romance, which influenced hat design for a decade. Her belted trench coat and slouch hat in A Woman of Affairs caught the attention of Women’s Wear Daily.

Hollywood was just then beginning to influence American fashion as Paris long had.  In 1930, 8 million Americans went to the movies every week. Film studios began working with retailers to tie in movie fashions with ready-to-wear clothing.

In 1932, Adrian designed a long white organdy dress with ruffled sleeves for Joan Crawford in the film Letty Lynton. The dress was produced by as many as 250 tailors, cutters, beaders, embroiders, jewel craftsmen, feather workers and seamstresses. 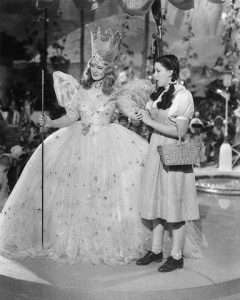 Billie Burke and Judy Garland as Glenda and Dorothy

The gown was widely copied by New York clothing manufacturers. Macy’s was supposed to have sold 50,000 copies from its Cinema Shop. Vogue reported the country was ‘flooded with little Joan Crawfords. The Letty Lynton dress is considered ‘the most cited dress in Hollywood fashion history.’

Adrian routinely produced 50 sketches a day and earned $1,000 a week.

When he wasn’t working he presided over an antiques shop on Sunset Strip or painted at his cabin on a ranch in Palm Springs. He was openly gay, but married actress Janet Gaynor – who was believed to be gay as well – with whom they had a son, Robin. They remained married until his death. The ruby slippers in the Smithsonian Institute National Museum of American History.

In 1938 Adrian began work on The Wizard of Oz, perhaps his most enduring work.

He designed everything from Judy Garlend’s blue gingham dress to the scarecrow outfit to 100 costumes for the Munchkins. He designed not one but two test pairs of ruby slippers.

Though the shoes were silver in the books, Adrian made them ruby red for the new Technicolor screen. (The ‘tech’ in ‘technicolor,’ by the way, is an homage to MIT, alma mater of two of the three men who invented it.)

One pair of slippers, the ‘Arabian test pair,’ had curling toes and heels. They detracted from Dorothy’s farm girl image, so MGM adopted the now-famous pair.

Each shoe had 2,300 sequins. Estimates vary about how many shoes the costume-makers actually made, but probably around 10. They made one pair a half size larger for Garland to wear in the afternoon after her feet got swollen. 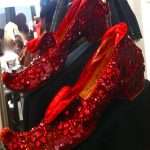 The Arabian test pair of slippers

In 1970, MGM’s wardrobe department auctioned off one pair of slippers for $15,000. Nine years later, the anonymous donor gave them to the Smithsonian Institution. In 2000, another pair of ruby slippers sold for $666,000 at an auction.

In 1941 Adrian left the film industry to start his own brand of ready-to-wear clothing. He didn’t think American women should imitate movie star fashions, except for the heroines of light comedy in middle-sized towns.

After a decade he had a serious heart attack, so he closed his store and bought a ranch in Brazil’s interior. He and Gaynor spent half the year there.

Eventually Adrian returned to Hollywood to design the costumes for Grand Hotel. In 1959 he began work on the upcoming Broadway musical Camelot but died suddenly of a heart attack. He was 56 years old.

Of his legacy, fashion historian Caroline Rennolds Milbank wrote Adrian proved America could have its own style.

It didn’t have to evolve from sportswear but could emanate from Hollywood, bypassing Paris altogether.

A Christmas First for New England? Each State Can Claim One.