Alice didn’t deny that she did it. In fact, she confessed right away when a neighbor saw the pool of blood on the floor of her home.

She had, apparently, been a good Pilgrim mother up until then. But she did it, and she hanged for it in the fall of 1648 at the Duxbury Fair. Donna A. Watkins, a descendant of Alice Bishop, tells the story of her life in her book Diverse Gashes. Though Watkins doesn’t have a definitive answer, she does sort through the difficulties the Pilgrims’ endured just to survive. She especially focuses on the struggles faced by Pilgrim women to run the house and family while remaining subservient to men and achieving godly perfection—all under the prying eyes of the neighbors.

Alice first appears in the historical record as “Alice Martin” on the day she married George Clarke–Jan. 22, 1639 (N.S.).

Watkins believes Alice Bishop may have been related to William Bradford, who served as Plymouth’s governor on and off for 30 years and wrote Of Plimoth Plantation. How, or when, she arrived in Plymouth—or even whether she was born there—isn’t known. But her absence from the Pilgrims’ records suggests she didn’t cause trouble or engage in ‘unseemly behavior,’ Watkins argues.

Alice’s new husband George Clarke had bought a 10-acre plot of land with a small wooden house on it in a neighborhood called Playne Dealing, two miles north of Plymouth. George farmed, Alice tended the house. That meant getting up before dawn, building a fire, cooking over an open hearth, hauling water, spinning hemp or flax or grinding corn.

She gave birth to their first child, Abigail, in 1643. Her second, the ill-fated Martha, was born in 1644. George Clarke died, probably suddenly, around then. 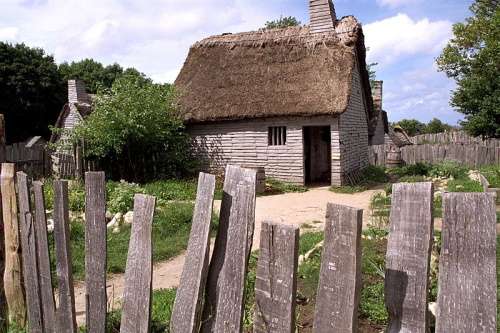 A replica house in Plymouth Colony, similar to the one Alice Bishop lived in.

On Dec. 5, 1644, the widowed Alice Clarke married Richard Bishop, a hired man. It wasn’t unusual for widowed spouses to remarry quickly in colonial New England. The Bishops’ daughter Damaris was born in 1646. Richard and Alice seemed to get along, as no records exist of trouble between them.

On Saturday, July 22, 1648, Alice Bishop would have been cooking meals for two days, since the Pilgrims forbade cooking on Sunday. Her husband was probably working in the fields. Abigail, then six, may have helped her mother with the chores.

Then a neighbor, 23-year-old Rachel Ramsden, stopped by the house to visit. Rachel noticed four-year-old Martha asleep on her bed. Alice gave her a kettle and asked her to borrow some buttermilk from Goodwife Winslow.

Alice had seemed normal, Rachel later testified. But when she returned, Alice seemed ‘sad and dumpish.’ Then Rachel noticed blood at the foot of the ladder leading to the attic. She asked about the blood. Alice pointed upstairs and told her to look.

Rachel, not seeing Martha in the bed, feared Alice had killed her, so she ran home to tell her parents. Her parents notified William Bradford, who quickly assembled three other men into a posse and went to the Bishop’s house.

The men later declared to the court what they saw: “…at the foot of a ladder which leads into an upper chamber, much blood; and going up, all of us, into the chamber, we found a woman child of about four years of age lying in her shift upon her left check with her throat cut with diverse gashes cross ways[.]”

The men then described the savagery of the attack: “…the wind pipe cut and stuck into the throat downward, and a bloody knife lying by the side of the child[.]”

They concluded that Alice Bishop had killed the child with the knife, and she confessed to them that she had.

Donna Watkins notes that the court records tell us nothing about why Alice Bishop killed Martha Clarke. One possible explanation: Her older daughter did it, and Alice took the fall for it.

But Watkins delves further into another explanation. Perhaps Alice just suddenly lost control under the demands of constant physical labor, motherhood, marriage, a mixed family, snooping neighbors and the community’s expectations of perfect behavior. And to make it even harder to live in that overcontrolled Puritan environment, Alice Bishop as a woman only ranked as a second-class citizen.

The Pilgrims, Watkins noted, expected complete domestic harmony. Court records show plenty of actions against neighbors, but few against family or household members.  “They controlled their emotions at home at the expense of their relationships with their neighbors,” wrote Watkins.

She speculated that Rachel Ramsden, the neighbor, could have said something critical of Alice Bishop. Perhaps Martha should have been up and awake by then. And perhaps four-year-old Martha misbehaved, which caused Alice Bishop to suddenly fly into an uncontrolled rage and take a knife to her daughter’s throat.

William Bradford, then governor, may have had Alice Bishop in mind when he wrote about the reasons for evil to appear in Plymouth Colony. “…[A]s it is with waters when their streams are stopped or dammed up. When they get passage they flow with more violence and make more noise and disturbance than when they are suffered to run quietly in their own channels.” Bradford wrote those words between 1648 and 1650, around the time Alice Bishop went to the gallows for murdering her daughter. At that time, Bradford had sunk into sadness and despair. Many of the original Pilgrims had died, Plymouth had shrunk and settlers had scattered into new towns. It was then that he stopped writing Of Plimoth Plantation.

Watkins argues, plausibly, that the murder of Martha Clarke and the hanging of Alice Bishop, possibly his relatives, contributed to his depression.

Donna A. Watkins in her book Diverse Gashes: Governor William Bradford, Alice Bishop, and the Murder of Martha Clarke, Plymouth Colony, 1648, explores the reasons Alice Bishop may have slashed her four-year-old daughter’s throat.

Boston Riots Once Every 3 Years — for Centuries