Ann Smith Franklin was actually one of two Franklins who left Boston for another coastal city to start up a newspaper and an almanac. The other was her brother-in-law, Benjamin Franklin. 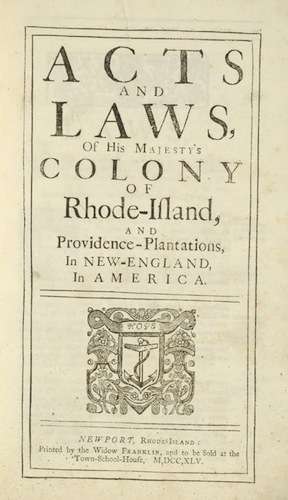 She was born October 2, 1696 in Boston to Samuel and Anna Smith. Not much is known about her childhood, except she had a good education and she was a Puritan. At 26, she married James Franklin in Boston on February 4, 1723.

James had traveled to England in 1717 and brought back a printing press. He established the first independent New England newspaper, the Courant, with the help of Ann. His younger brother and indentured servant Benjamin also helped.

The New England Courant got James into trouble. He criticized the Puritan theocracy, and in 1722 he was imprisoned for a month for printing ‘scandalous libel.’ He continued to print ‘wicked’ articles, which continued to get him in trouble, and so in 1727 he and Ann took their printing press to Newport, R.I. His brother John Franklin, a tallow chandler, lived there.

James and Ann Franklin had five children while living in Newport, three of whom lived to adulthood. Together they launched the Rhode Island Gazette, the colony’s first newspaper, on Sept. 27, 1732. Ann helped James in his print shop. She set type, ran the press and sold their newspapers, books and James’ Rhode Island Almanack by Poor Robin. James died in 1735 after a long illness. Ann took over the printing business, but didn’t make enough money to support her family. In 1736, she asked the General Assembly of Rhode Island for a contract:

Whereas your petitioner being left with several small children which is a great charge to her, and having not sufficient business at the printing trade, humbly prays hour Honors will grant her the favor to print Acts of the Colony and what other things shall be lawful and necessary to be printed, in order for your Petitioner’s support and maintenance of her family, she having no other way to support herself.

She got the job.

In 1745 she received her biggest commission: 500 copies of a folio edition of the Acts and Laws of Rhode Island, ‘Acts and Laws, of his Majesty’s Colony of Rhode-Island, and Providence-Plantations, in New-England, in America, Newport, Rhode-Island: Printed by the Widow Franklin, and to be Sold at the Town-School-House.’ She also printed sermons to supplement her income, and broadsides of private quarrels.

Ann’s son James went to Philadelphia to apprentice with his Uncle Benjamin. Meanwhile, her two surviving daughters, Mary and Elizabeth, helped her set type in the print shop. When James returned from Philadelphia in 1748, he ran the business, called ‘Ann and James Franklin.’ Ten years later they started a newspaper, The Newport Mercury. As Ann approached her 60s, she turned more of the business responsibility over to her children, but all three died early. After James died in 1762, Ann went back to the printing press. She became the sole editor of The Mercury on Aug. 22, 1762, never missing an issue. She took on a partner, Samuel Hall, late in 1762, but then she died on April 16, 1763.

Her obituary appeared in The Mercury. It described her as someone whose ‘economy and industry … supported herself and her family, and brought up her children in a genteel manner.’

In 1985, she was inducted into the Rhode Island Journalism Hall of Fame.

With thanks to Women in Early America: Struggle, Survival, and Freedom in a New World by Dorothy A. Mays. This story was updated in 2022.

‘Havlicek Stole the Ball!’: The Greatest Broadcast Moment Ever in Basketball

I appreciate the way you highlight the remarkable women among our early settlers, who really experienced significant persecution in Boston, such nasty men many of the founding ‘fathers’ were.

[…] 22, 1762 Ann Franklin, the sister-in-law of Benjamin Franklin, becomes the sole editor and publisher of the Newport Rhode […]

[…] Newport Mercury newspaper, sympathetic to the patriot cause, picked up and moved to Attleboro, Massachusetts. Other […]

[…] minister, Ezra Stiles, gave an eyewitness account of the synagogue’s consecration to the Newport Mercury. Stiles, who studied the Jewish community in Newport, praised the ceremony and the building’s […]

[…] His Hebrew sermon was startling enough to be printed in full an in English in the local newspaper. […]

[…] the son of tavern owner Henry Gardner, advertised his act in the Newport Mercury in June of 1774 and noted that he would repeat “nearly all the parts that were exhibited here by […]

[…] Island Almanack, no doubt inspired by her brother-in-law Ben’s publications. More on Ann at the New England Historical Society and the History of American Women […]

[…] minister, Ezra Stiles, gave an eyewitness account of the synagogue’s consecration to the Newport Mercury. Stiles, who studied the Jewish community in Newport, praised the ceremony and the building’s […]

[…] wasn’t the only one who printed almanacs in New England, though. Franklin’s sister-in-law, Ann Smith Franklin, published Rhode Island Almanac by Poor Robin in Newport, R.I. The Old Farmer’s Almanac was a […]

[…] most prominent citizens at the Common Burying Ground in Newport. His neighbors include Ida Lewis, Ann Smith Franklin and William […]

[…] the only member of his family to leave Boston for another city so he could start his own newspaper. Ann Smith Franklin, his sister-in-law, did it as […]