On Dec. 24, 1706, Judge Samuel Sewall brought a Banbury cake to a sick friend in Boston. Sewall, best known as one of the Salem witch trial judges, served for many years as chief justice of the Massachusetts Superior Court of Judicature. He had a wide circle of friends, and kept a diary for 50 years. In it, he recorded much that happened of significance in Massachusetts during the late 17th and early 18th century. He also included his own inability to get a date. 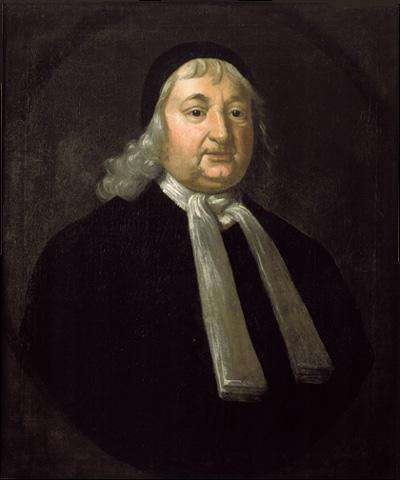 Sewall’s diary also reveals the workings of a staunch Puritan mind, which brings us to the Banbury cake.

The Banbury cake originated in a Puritan stronghold, the town of Banbury in Oxfordshire, England. It’s a pastry stuffed with spiced currants or other dried fruit. Banbury bakers have made them since the 16th century.

The first recipe appeared in Gervase Markham’s The English Huswife in 1615. It starts with four pounds of currants to make “a very good” (and very large) Banbury cake. Then one takes flower (flour), barm (leaven or yeast), butter, cream and sugar and “works it together for an hour.” The pastry surrounds the currants, and the whole thing is baked “according to bigness.” The characteristic Banbury cake has an oval shape with three slashes across the top. It got famous over the centuries. In 1869, Robert Chambers wrote, in his Book of Days, the cakes “are exported to the most distant parts of the world, one baker alone, in 1839, disposing of 139,500 twopenny ones.”

Banbury had a reputation for cheese, cakes and ale, though some have said its fame rested on cheese, cakes and zeal. They referred to the extreme Puritanism that characterized its inhabitants. Banbury’s zealous Puritans prompted the English poet Richard Braithwaite to write in 1638,

To Benbury came I, O profane one!
There I saw a Puritane one,
Hanging of his cat on Monday,
For killing of a mouse on Sunday.

Ride a cock-horse to Banbury Cross,
To see a fine lady upon a white horse;
Rings on her fingers and bells on her toes,
And she shall have music wherever she goes.

Banbury still has a cross, though not the original. The Banbury Puritans tore it down (too Papist) around the time of the English Civil War. Statue of Banbury’s Fine Lady and cross (atop steeple)

One of the staunchest Puritans who lived near Banbury was William Fiennes, 1st Viscount Saye-and-Sele. He supported colonization of North America. In 1632, he got a deed of conveyance for a large tract of land along the Connecticut River and his company appointed John Winthrop the Younger to serve as governor. Saybrook, Conn., bears his name, along with another incorporator, Lord Brooke.

We know of other Puritans from Banbury who came to New England during the Great Migration. The Rev. Samuel Newman, for example, emigrated from Banbury to Dorchester (now a Boston neighborhood), then helped found Rehoboth, Mass. And Samuel Borman emigrated to Ipswich, Mass., from Banbury.

Arthur Wellington Brayley speculated the Massachusetts Puritans especially enjoyed the Banbury cake. Brayley noted how Samuel Sewall brought one to a sick friend in his 1909 book, Bakers and Baking in Massachusetts, Including the Flour, Baking Supply and Kindred Interests, from 1620 to 1909.

“Banbury was also famous for its Puritanism, and this savor may have extended to its cakes,” Brayley wrote.

Samuel Sewall wrote the following about his Christmas Eve visit in his diary:

Visited Mr. Bayley as I came home: he has a very sore Mouth. He tells me he has left off observing the distances of his Fits, is tired and done. I gave him a Banberry cake, of which he eat pretty well, complaining of his Mouth.

As a good Puritan, Sewall noted with approval all the shops opened for business the next day — Christmas.

And, to his credit, he later apologized for his role in the Salem witch trials.

There are plenty of recipes for Banbury cake on the internet. Here’s one we’ve adapted from The English Kitchen.

Combine 1 tablespoon cinnamon, 1-1/2 1 teaspoon nutmeg, 1 teaspoon coriander and nutmeg, 1/2 teaspoon ground ginger, 1/4 teaspoon each of ground cloves and all spice. Mix well and store in an airtight container out of the light for up to six months.

Image: The Fine Lady and Banbury Cross By Jongleur100 – Own work, Public Domain, https://commons.wikimedia.org/w/index.php?curid=7439313. This story last updated in 2022.