Buffy Sainte-Marie was a rising star in the 1960s until her activism on behalf of her Native-American people put a lid on her career. 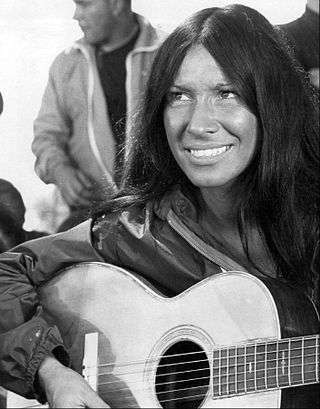 She was born Feb. 20, 1941, on the Piapot Plains Cree Nation Reserve near Craven, Saskatchewan. Her parents abandoned her as an infant. Known only as Beverly, she was adopted by a Wakefield, Mass., couple, Albert and Winifred Sainte-Marie, both of Mi’kmaq descent.

She grew up in Massachusetts and Maine, but felt she didn’t fit in. “I wanted above all to be a blonde,” she told a Boston Globe reporter. “My ambition was first to be a cheerleader and then an airline stewardess–you know, like the average girl. Then I realized that as the average girl I was a failure, so I decided to be myself.”

She was nicknamed Buffy.and played piano and guitar by the time she went off to the University of Massachusetts at Amherst.

At UMass she studied French and Hindi. She also began to write songs about Native-American rights, addiction, incest and war. Still, she thought she’d become a teacher back on her reservation. She earned a degree in teaching and Eastern religion in 1962, and later a Ph,D, in Fine Arts from UMass.

But she had been playing with success on the Boston coffee house scene, where Joan Baez and Bob Dylan had played. Like other folk singers before her, she moved to Greenwich Village, where she wowed the New York City folk crowd with defiant protest songs and a skintight red snakeskin dress. She also played in Toronto coffeehouses, college campuses and Indian reservations.

Her songs emerged from her own experience and were daring for their day. One night in 1963 she was waiting in the San Francisco airport for a flight to Toronto when she saw U.S. soldiers carrying their buddies on stretchers.  She talked to the soldiers and learned they were returning from Vietnam – at a time when the United States was denying involvement in the war. It inspired a protest song, Universal Soldier, that the English singer Donovan made a hit. In 1963 she also recorded Cod’ine, about her recovery from her addiction to codeine.

In 1970, she was sending $300 a week to buy water for the Indians who seized Alcatraz Island the year before. She’d also set up a foundation to send young Indians to law school.

That year, Boston Globe writer Herbert Kupferberg described her in a way that wouldn’t get published today:

The best-known fighter for the American Indian since Geronimo is a spunky, sexy, 100-pound girl named Buffy Sainte-Marie.

Buffy, who’s a full-blooded Cree Indian herself, fights for her people with her voice, her personality, and her money. She’s got plenty of each, because she’s one of the most successful folk singers in the business, with particular appeal to the campus crowd and other young people.

It seemed during the ‘60s that she would rocket to the top along with fellow Canadian performers Neil Young and Joni Mitchell. Billboard Magazine named her Best New Artist, she played at the Newport Folk Festival and appeared on national television programs like The Johnny Cash Show and The Tonight Show.

But her 1964 debut album, It’s My Way, did poorly in the United States. The recording included bold songs such as Now That the Buffalo’s Gone and The Incest Song along with Universal Soldier and Cod’ine. It did well in Canada, however.

Starting in the 1990s, Buffy Sainte-Marie came out and said she’d been blacklisted in the 1960s because of her activism. She claimed the Johnson Administration ordered her records seized and pressured radio stations not to play her music.

“I was put out of business in the United States,” she said. She discovered letters that Lyndon Johnson had written on White House stationery 10 years earlier. They praised radio stations for suppressing her music.

Buffy Sainte-Marie performing at The Iron Horse in Northampton, Mass., 2013

Her career took a twist in 1975. Sesame Street producer Darcy Singer called to ask her to make a one-time appearance on the show. She refused at first, but then realized the opportunity for Native-American programming. Buffy Sainte-Marie then appeared on Sesame Street for the next five years.

She is still best known for her songs. They including 1960s protest anthems, like Universal Soldier, love songs like Until It’s Time for You to Go, and rock anthems like Starwalker. A song she co-wrote, Up Where We Belong, became a hit when Joe Cocker and Jennifer Warnes sang it for the soundtrack to An Officer and a Gentleman.

love that you dated the picture 1870 lol

Oh no! Thanks for pointing out the error!

[…] It took more than 15 years for Buffy Sainte-Marie to find out why her songs got so little play on American radio. Click for more. […]

[…] Buffy Sainte-Marie was a rising pop star in the 1960s until her activism on behalf of her Native-American people put a lid on her career. […]