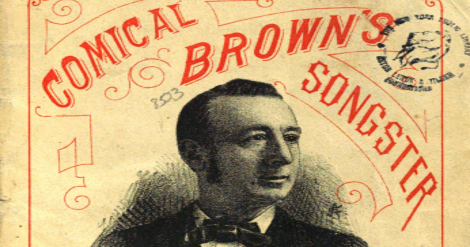 If you live in a New England town with town hall, a school, a church or an opera house, chances are good it was visited at least once by the outrageous showman William B. Brown, better known as Comical Brown.

Born in 1833 in Lancaster, Mass., into a Quaker family, as a child he prepared to become a shoemaker. But at 16 his musical talent took him in a different direction. He began performing small concerts on the violin to help support his blind father. It set the direction for the next 45 years of his life.

At first he took small parts in minstrel shows and regularly performed in the stage play Uncle Tom’s Cabin, based on the book of the same name. By the mid-1860s, however, he hit the road as a headliner. An advance man would work the towns on Brown’s calendar, appearing a few days in advance to plaster the town with fliers and newspaper notices for “That Comical Brown!” show.

His act consisted of a number of humorous monologues in which he took the role of cranky, old Yankee or warm-hearted Irishman. He joked with the crowd while spinning yarns and songs designed to draw laughs or groans. Mixed in, he played the violin and turned the stage over to other members of his small troop.

As Brown traveled from town to town, he updated his material each year or two so it was fresh whenever he rolled into town. He brought the fun of the vaudeville stage to the small towns of New England and beyond for a remarkable 45 years.

In 1885 Brown compiled some of his best material and published it as Comical Brown’s Songster – equal parts cornball observations and slyly racy songs. Male/female relationships, man’s personal foibles, the temperance society and other timely topics were staples of his comedy. This number, Of Course It’s No Business of Mine, surely raised the rafters when he belted it out:

Now, for instance, at Mrs. Montgomery’s,
Every afternoon, just about three,
When her husband is out at his business,
A gent with moustache comes to tea.

He stays till half-past eight o’clock,
For the husband don’t get home till nine;
Now I’d like to know what he does there!
But then it’s no business of mine.

Across the way lives dear Miss Baxter,
A nice, dashing, handsome young girl;
Who, for the last twelve months or so,
Has been flirting with Mr. Fitz-Furl;

They say she is going to be married,
Well, I must say I think it is time;
For, if she’s not married, she’d ought to be,
But then it’s no business of mine.

I met Lucy Bell t’other evening,
With her nephew going out for a walk,
And, of course, as soon as she saw me,
She stopped and began a long talk

All about her dear little nephew,
Who she said was between eight and nine,
But some say it isn’t her nephew,
But then it’s no business of mine.

At Mrs. Fitz-Snooks’, round the corner,
Last evening I heard such a din,
And found that she’d not paid her rent,
So the Sheriff they quickly brought in.

I don’t know what she does with her money,
Though her nose always redly does shine,
I think that she spends it for brandy,
But of course it’s no business of mine. Contralto E.A. Marsh costumed for The Daughter of the Regiment. (Library of Congress)

The indignities of the comedy circuit were many. The show had to go on each night in a new town, regardless of weather. Comical Brown’s critics suggested there was good reason he never played the same venue two nights in a row: because once the audience heard his act they would warn their neighbors not to bother.

One particularly joyless stop came in Charlton, Mass. where Brown was forced to play in a church rather than the town hall, which had burned. He churned out his music and jokes to a stone-faced audience, whose members were too intimidated by the church sexton glaring from the rear of the church to even crack a smile.

Over the years, Comical Brown moved around New England, living in Somerville, Mass. and Rutland and Barre in Vermont. As he grew older there were hints that he was slipping, though he was still much loved. The Saint Johnsbury Caledonian reported in 1891, “Comical Brown played to a large audience at the Opera House Thanksgiving night. Everybody was kept in good humor and though Brown is not as good as he used to be, he still makes folks laugh.”

Comical Brown’s career finally ended in 1893. At the age of 60 he was found unconscious at a Boston train station, possibly headed for his next concert. He died at the nearby hospital leaving behind a widow and two daughters. His death was reported as far away as California.

The Comical Brown act lived on for more than a decade after Brown’s death in the form of the “Comical Brown Concert and Comedy Company.” It was also “billed as Comical Brown’s Old Show with a replacement cast.” Finally, his act became synonymous with outdated, stale jokes. Into the 1920s, if someone told a particularly unfunny, old joke, the proper response was, “That’s a great one. I think I remember Comical Brown using it.”

In 1909 Brown’s career was eulogized by Broadway playwright Stanley Rosenfeld in the comedy-drama The Barnstormer, about the star of one-man show traveling to backwoods towns in the waning days of his career. It was not a hit.