Home Connecticut How the Daughters of Liberty Fought for Independence How the Daughters of Liberty Fought for Independence

On August 14, 1768, the Daughters of Liberty cheered from windows as the Sons of Liberty paraded through Boston to commemorate their riots against colonial officials three years earlier.

They were far more than cheerleaders, though they did rally the men in Newport, R.I., to steer clear of taverns selling English whiskey. The women organized boycotts of British goods, especially tea, and they manufactured replacement products, especially cloth. They pressured men to embrace the patriot cause, refusing to date anyone unwilling to risk life and property for freedom. Some even took on dangerous military missions.

The Daughters of Liberty, though not as celebrated as the Sons, were crucial to the cause of liberty in the run-up to the American Revolution.

“With ladies on our side, we can make every Tory tremble,” Samuel Adams said. Abigail Adams is often linked with the Daughters of Liberty, though she wasn’t a card-carrying member. So are Deborah Sampson and Prudence Cummings Wright. Sampson dressed as a man and joined the Continental Army, while Wright led a group of women in capturing two British spies. Sarah Bradlee Fulton, a card-carrying Daughter of Liberty, was the ‘mother of the Boston Tea Party’ and spied for George Washington.

Well before the Revolution, though, the ladies formed chapters throughout New England to free themselves from British economic tyranny. The ladies equated political independence with economic independence.

A Daughters of Liberty chapter branched off from the Sons of Liberty in Providence in 1766, followed in Rhode Island in East Greenwich and Newport.

Parliament unintentionally provoked more resistance among the colonial women when it passed the Townshend Acts in 1767, taxing imports of British glass, lead, paints, paper and tea.

In Massachusetts, there were 300 daughters of Liberty in Boston by February 1770; they were also in Beverly, Byfield, Ipswich, Newbury, Rowley and Salisbury.

From early in 1766 to about 1771, spinning bees were all the rage in New England. Women wanted independence from British textile manufacturers, and started making their own cloth. Homespun became the politically correct fashion item.

On April 7, 1766, the Boston Gazette reported 18 daughters of liberty gathered at the house of Dr. Ephraim Brown. “There they exhibited a fine example of industry, by spinning from sunrise until dark, and displayed a spirit for saving their sinking country, rarely to be found among persons of more age and experience,” reported the newspaper. Newspapers continued to report on the smallest cloth-making development.

Spinning schools were revived and awards were offered for the person who wove the most cloth. A woman raised 6,000 silk balls from a single mulberry tree in Windham, Conn. A 70-year-old woman in Newport, R.I., learned to spin for the first time. In February 1769, two Connecticut women held an all-day spinning contest in which the winner spun seven skeins and two knots of fine linen yarn, just a little more than her competitor.

Women began gathering in large groups, often at ministers’ homes, along the coast of Massachusetts and Rhode Island. For 32 months starting in March 1768, more than 60 spinning meetings were held from Harpswell, Maine, to Huntington, Long Island.

“I presume there never was a Time when, or a Place where, the Spinning wheel could more influence the Affairs of men, than at present, in this and the neighbouring colonies,” wrote one contemporary writer in the newspaper series, A Journal of the Time.

In 1770, Parliament repealed all the Townshend duties except the tax on tea. The Daughters of Liberty had already pledged not to drink the stuff. They made ‘liberty tea’ from currant and raspberry, basil, mint, even birch bark.

Then the Tea Act of 1773 gave a virtual monopoly on tea to the floundering Dutch East India Company. It also inspired the Boston Tea Party. 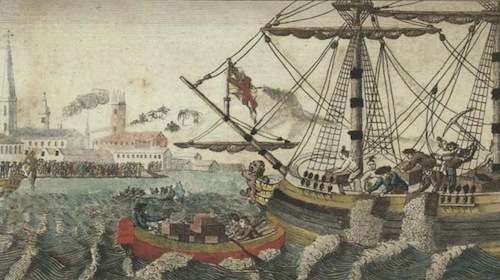 Sarah Bradlee Fulton was a Medford, Mass., housewife and leader of the Daughters of Liberty.

She is credited with the idea of disguising the men who dumped the tea into Boston Harbor as Mohawk Indians. She painted their faces and found Native American clothing for them. After the Tea Party, the men returned to her home to clean off the paint and get rid of their disguises.

When war broke out, the Daughters of Liberty melted metal for bullets and sewed soldiers’ uniforms. Fulton organized women to nurse soldiers wounded in the Battle of Bunker Hill. She also served as one of George Washington’s spies.

During the siege of Boston, Maj. John Brooks had important dispatches to send from Medford to Washington. Fulton volunteered, thinking the British wouldn’t suspect a woman of spying. She walked across enemy lines at night, rowed to Charleston and delivered the message.

Sarah Bradlee Fulton died in 1835, and 65 years later a memorial stone was placed at the Salem Street Burying Ground in Medford.

[…] Similar to the Sons of Liberty, a group comprised of approximately 300 women was referred to as the Daughters of Liberty, and they had significant influence. Sarah Bradlee Fulton was an important figure who became known […]