Don Pedro, The Last True Pirate To Raid the Atlantic

Don Pedro, the handsome, ruthless Spanish pirate, apparently didn’t get the memo in 1832 that piracy was over in the Atlantic Ocean.

He made a reckless move on the high seas against a brig from Salem, Mass., and he paid for it with his life. Don Pedro was born around 1800 in Catalonia, Spain, as Pedro Gibert. He started out in an honest job — as a privateer working for the Colombian government. He soon turned to piracy, attacking American merchant vessels, raiding the east coast of Florida and smuggling liquor and tobacco.

According to legend, Don Pedro once told his crew what to do with their captives. “Dead cats don’t mew. You know what to do.”

He commanded the Panda, a black Baltimore clipper with a white streak. The pirate captain had a favorite technique of terrorizing its targets. Panda would hide in protected coves and lure unsuspecting vessels into shallow water with a fake distress call. The merchant vessel would come to help and the pirates would ambush the crew.

Don Pedro, departing from his usual technique, ordered the Panda crew to chase the Mexican into open water off the Florida coast sometime between 2 am and 3 am.

The Mexican captain, John Groves Butman, first spotted the Panda at 4 am, just as dawn broke. He thought the schooner looked suspicious and tried to evade her.

The pirates fired a gun at the brig, and the captain saw the Panda had several large guns and 60 men crowding her deck. Butman hove to. By 9 a.m. the pirates boarded the Mexican. They then brandished long Spanish knives and beat the captain until he told them where the silver was. The pirates took away the silver in 10 boxes, each containing $2,000 worth of silver. 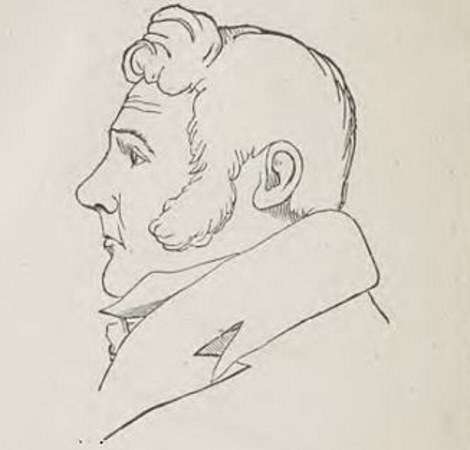 Likeness of Don Pedro taken at the trial.

The pirates then locked the crew of the Mexican into the forecastle, slashed the rigging and the sails and set the ship on fire. They didn’t do a good enough job. Because the pirates didn’t fasten the skylight, the captain escaped when they sailed away in midafternoon.

Return of the Mexican

The Mexican crew put out the fire, but made sure the ship still smoked. Hence the pirates sailed over the horizon expecting no mewing.

The Mexican crew repaired the ship and made it back to Salem six weeks later.

In Massachusetts, the Mexican crew reported the crime. The British Royal Navy then hunted Don Pedro. The pirates knew they were wanted, so they buried $11,000 – what was left of the treasure – on the beach of Cape Lopez in what is now Gabon. They dug it up again, took out $6,000 and left the rest for Don Pedro. Then they divided up the loot. HMS Curlew caught the Panda off the coast of West Africa, and the two vessels fought. During the engagement, the Panda exploded. The British captured Don Pedro and his crew, identifying several of them as participants in the Mexican attack.

The British dumped the men off in Salem for a preliminary hearing. They were then shipped to Boston for trial. A jury found seven men guilty, including Don Pedro, and acquitted five. To read a transcript of the trial, click here.

On June 11, 1835, Don Pedro and four of his men were hanged until dead behind the Leverett Street Jail. More than 20,000 spectators watched.

John Rowe Takes the Middle Path in the American Revolution