If the English colonists knew how much pumpkin they’d eat when they got to New England, they might have had second thoughts about coming.

That’s not to dismiss the pumpkin’s many fine qualities. But it’s just that some colonists got sick of eating the fruit they called pompion, especially during hard winters.

For many, pompions made the difference between starvation and survival. Colonists grew them easily and in abundance, and they could store pumpkins all winter.

A colonial cook could do just about anything with a pompion. She could make them into pies, stews, tarts, soups and puddings. Or she could boil them, roast them, fry them or mash them. She could also dry the seeds and salt them.

Here are eight other things you may not know about pompions.

The early colonists ate so much pompion they included it in the first American folk song, New England Annoyances, or Forefathers Song:

Instead of pottage and puddings and custards and pies,
Our pumpkins and parsnips are common supplies;
We have pumpkins at morning and pumpkins at noon,
If it was not for pumpkins we should be undone!

(Read the lyrics to the whole song here.) The Pumpkin Patch by Winslow Homer

Much as Wisconsinites are known as ‘cheeseheads,’ New Englanders were called ‘Pompkins.’ ‘Pompkinshire’ described ‘Boston and its dependencies,’ according to Francis Grose in A Classical Dictionary of the Vulgar Tongue, published in London in 1796. In a letter to the editor of American Farmer in 1833, the writer stated he had “traveled through the ‘Land of Steady Habits,’ or ‘Pumpkin Dominion’ (I mean the New England States).” And a biographer of Horace Greeley described him as belonging ‘to the nasal, angular, psalm-singing, pumpkin-growing generation.’ Pumpkin is a diuretic, as a 17th century traveler named John Josselyn pointed out. In Josselyn’s 1671 book, New-England’s Rarities, he published one of the oldest surviving pumpkin recipes. “It provokes Urine extreamly,” wrote Josselyn (he was right), and ‘is very windy’ {it isn’t). (For a stewed pumpkin recipe, click here.)

Henry David Thoreau likely grew the first giant pumpkin in America. He wrote in his book Wild Fruit that in the spring of 1857: “I planted six seeds sent from the Patent Office and labelled, I think, Potiron Jaune Grosse – Large Yellow Pumpkin (or Squash). Two came up and one has become a pumpkin which weighed 123 ½ pounds. The other bore four weighing together 186 ¼ pounds. The big pumpkin ‘took a premium at the Middlesex Show’ that fall.” The Pilgrims at Plimoth Plantation likely ate stewed or baked pompion, rather than pompion pie. But pumpkin pie came into its own in the late 18th century, and Abigail Adams had a recipe for it. She used molasses rather than sugar, which made the pie a bit tart.

Though the Adamses didn’t celebrate the modern Thanksgiving, they did celebrate Forefather’s Day in late November. Abigail may have served her pumpkin pie then. 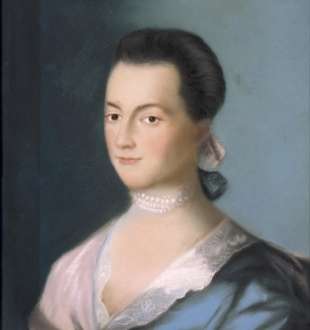 Pumpkins have many health benefits, which may be why they kept the early colonists alive. Native Americans used them to treat urinary infections (see John Josselyn) and intestinal worms.

Pumpkins have lots of: fiber, which can lower blood pressure; Vitamin A, which aids vision; Vitamin C; potassium, which balances electrolytes; and beta-carotene, which may help prevent cancer. Their seeds also have a variety of antioxidants, which can reduce inflammation. They are linked to a reduced risk of cancer and they’re high in magnesium, which reduces blood pressure. They’re also loaded with tryptophan, which promotes sleep. And they may improve insulin regulation in diabetics. People probably made the first jack o’lanterns from turnips or mangelwurzels, a kind of beet. Making jack o’lanterns at Halloween started in Ireland and the Scottish Highlands. The illuminated vegetables supposedly warded off evil spirits or represented supernatural spirits. The custom then spread to England. Then it came to America, where John Greenleaf Whittier wrote a poem in 1807 about carving pumpkins. Modern carving of a Cornish Jack-o’-Lantern made from a turnip.

The Connecticut Field Pumpkin, one of the oldest in existence, has been the standard carving pumpkin since 1871. Jack Howden developed a variety of it, called the Howden, which has a more symmetrical shape. It then got its name from the place where the original was found: Connecticut. Joseph Dudley and the Private Bank That Sank Him

Obadiah Holmes, The Baptist Martyr The Puritans Should Have Left Alone

[…] legions of collectors pay hundreds of dollars for vintage Halloween ephemera made by the two companies. For example, in 1928 Dennison sold a six-section paper table […]

[…] Pumpkins played such an important role in any  feast that some 17th-century Puritan ministers denounced them from the pulpit. They preached that Thanksgivings should be renamed ‘St. Pompion’s Day’ because of the gluttony they inspired. […]

[…] England's Annoyances, circulated in the 1640s, complained of bitter winters, failed crops and an endless diet of pumpkin. It also recognized people who left New England threatened the colonies’ survival: “Now while […]

[…] were a common food staple throughout the colonies. Historians even credit early Americans with changing the word "pompion" into "pumpkin" – the spelling (and pronunciation) as we know it […]