Home Connecticut How a Slave and a Counterfeiter Made the Fugio Cent, the 1st U.S. Money How a Slave and a Counterfeiter Made the Fugio Cent, the 1st U.S. Money

A convicted counterfeiter and a Connecticut slave made the first U.S. coin, called the fugio cent, in fulfillment of a government contract obtained through a bribe. As a young man, Abel Buell got caught counterfeiting five pound notes. As punishment, authorities cut off the top of his ear and branded his forehead with the letter ‘C.’

Buell later made the first map of the United States, sold at auction to the Library of Congress for $2 million in 2010.

Far less is known about the enslaved man, known only as Aaron. He was only recently discovered to be one of the workers who made the first coins of the United States, along with a freed black man, white workers and children, according to numismatist and historian Christopher McDowell.

Abel Buell, Aaron and the others didn’t make the first fugio coins at a U.S. mint. Instead, the U.S. government gave a contract to make the fugio cents at the Connecticut mint. That early  effort at outsourcing didn’t go well.

“It was a fiasco,” said McDowell, who uncovered the story of the Connecticut mint. The tale underscores the early fragility of the United States, the genius of the first Connecticut Yankee and the struggles of the people who actually worked to build the country.

In 1785, Connecticut opened the first state mint in New Haven. One building stood on the current Eli Whitney Museum and Workshop  (formerly his gun factory) in Hamden. In 1787, the infant U.S. government asked for bids to produce the first official U.S. coins. One of the Connecticut mint’s owners, James Jarvis, bribed the assistant U.S. Treasurer, William Duer, to get the contract.

Under the contract, the Connecticut mint had to produce 300 tons of copper coins. But there wasn’t anywhere near that much copper in the United States. Jarvis went to England to find a partner who would supply more copper, but he returned empty handed.

The mint produced only 1200 pounds of coins before it failed for lack of copper. That failure revealed William Duer’s dishonesty. Jarvis had given Duer a note for $10,000 on the condition he collect on it if the mint failed. Duer, however, had sold the note to two men, who came to Jarvis to collect.

Jarvis refused to pay, saying the note had no value because the conditions hadn’t been met. And that, said McDowell in an interview, is how we know about the bribe.

Today there are many low -grade fugio cents, but collectors will pay $10,000 or more for a rare example in excellent condition.

The fugio cent earned its name from the caption ‘fugio’ above an image of the sun shining on a sundial. Fugio, Latin for ‘I flee/fly,’ and the words ‘mind your business’ below the sundial form a rebus meaning ‘time flies, do your work.’ The reverse side includes thirteen chain links and the captions, ‘we are one’ and ‘United States.’

Ben Franklin originally came up with the fugio design for Pennsylvania notes he printed.

Thomas Jefferson later remembered the disaster of the Connecticut mint. In 1792, a debate broke out about whether the U.S. government should build its own mint or not. Jefferson successfully argued in favor of a national mint.

Buell’s ingenuity rivaled that of Sam Slater, who built the first textile mill in Rhode Island. He joined the Connecticut mint after the owners got the contract to make the fugio coin. William Duer may have been dishonest, but it would have looked bad to include a convicted counterfeiter on a proposal to mint money.

As a young man, Buell used his skill at engraving to alter the plates for five-pound notes to plates for larger denominations. Then he printed them.

No one detected the alterations, but his neighbors suspected something odd was going on because Buell’s kept his lights on late at night. A neighbor climbed a ladder one night to peer into Buell’s second floor and caught him printing money on a homemade press.

Historian John Warner Barber in 1836 described the rest of his punishment:

The tip only of Buell’s ear was cropped off: it was held on his tongue to keep it warm till it was put on the ear again, where it grew on. He was branded on the forehead as high up as possible. This was usually done by a hot iron in the form of a letter designating the crime, which was held on the forehead of the criminal till he could say the words “God save the king.”

The mint owners, however, needed Abel Buell. He knew metallurgy at a time in America when very few people had the skill. Buell could work with steel, needed to make dies for coins. He had the refined ability to do intaglio engraving.

Buell designed the press and the rolling machines for the mint. Then he served as mint master, melting copper, refining copper and making copper into sheets.

“He was one of the few people who could do it,” said McDowell.

But Buell didn’t do it all.

Several years ago, ledgers from the Connecticut and federal mint were rediscovered in the New Haven Museum archives.

McDowell studied those ledgers. He learned that 33 workers in addition to Aaron made the first fugio coins: children, indentured apprentices, white unskilled laborers, white craftsmen and a free black man.

Aaron worked the press, taking copper blanks and stamping the fugio image onto it.

For that work, Aaron’s wages of four shillings a day went to his master, a man named Levi Hubbard. But Aaron had a side deal: If he worked extra hours, he could keep his overtime wages.

Abel Buell traveled to England in 1790 after the mint failed. People have long thought he left the United States to avoid the long arm of the law, McDowell said. However, subsequent research shows he went to learn the secrets of the British textile industry.

Like Sam Slater, Abel Buell memorized the secrets of large-scale cotton manufacturing and brought them back to America.

In New Haven, Buell established one of the country’s first cotton mills. He printed the first map of the United States, and he created the first movable type made in America. 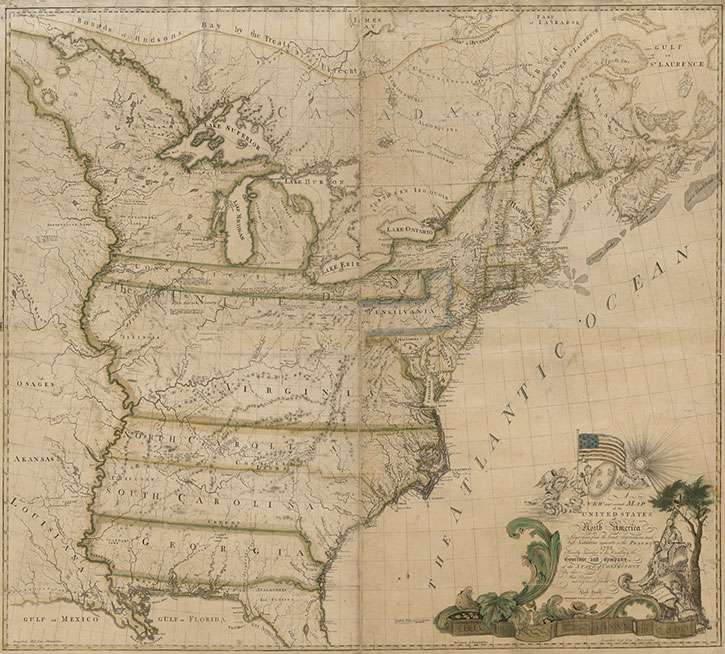 The first map, by Abel Buell.

But Abel Buell died penniless in a New Haven an almshouse in 1822. The man responsible for minting the fugio cent was buried in a pauper’s grave.

“Abel Buell was Eli Whitney before there was an Eli Whitney,” McDowell said. “He was the first Connecticut Yankee.”

McDowell wrote the 2015 book, Abel Buell and the History of the Connecticut and Fugio Coinages This story last updated in 2022.

John Endecott and the Politics of the First Massachusetts Flag