Why Gilbert Stuart Never Finished His Portrait of Washington

Early American painter Gilbert Stuart never finished his most famous work, the portrait of George Washington featured on the dollar bill for more than a century. He promised Washington he’d send it to him, though he may never have intended to part with it.

Capturing Washington’s likeness was a challenge for Stuart, who had to dig deep into his conversational bag of tricks to get the Father of His Country to relax. The story of that single portrait sitting captures Stuart’s talent as well as his unreliability. Detail from Gilbert Stuart self portrait, Redwood Library and Athenaeum in Newport, R.I.

He did manage to finish more than 1,000 portraits of the new country’s leaders, including five presidents, governors, ministers, educators, diplomats, merchants, military heroes, judges and ministers.

Ironically, Stuart had sided with the British during the American Revolution. Gilbert Stuart was born in Saunderstown, Rhode Island Colony on Dec. 2, 1755 and baptized in the Old Narragansett Church. His father , Gilbert Stewart, worked in the first snuff mill in America after immigrating from Scotland. No surprise, then, that Stuart had a lifelong addiction to the stuff.

When Gilbert was six, the family moved to Newport, R.I., where his father ran a shop that advertised ‘Continues to Make and Sell, Superfine Flour of Mustard.’ Young Gilbert Stuart’s artistic talent emerged at a young age. A visiting Scottish painter, Cosmo Alexander, tutored him. At 14 he painted Dr. Hunter’s Spaniels, which now hangs in the Hunter House Mansion in Newport. At 16 he moved to Scotland with Alexander to pursue his studies, but Alexander died and Stuart couldn’t make a living. So he returned to Newport as a crew member on a collier headed for Nova Scotia.

He and his family sided with the Loyalists during the American Revolution. So in 1775 his father fled to Nova Scotia and he moved to England.  There, Benjamin West took him into his home as his apprentice. The Skater, National Gallery of Art

In 1782, at 26, Stuart painted his breakthrough work, The Skater, a large portrait of William Grant. He had never painted a full-length portrait, and people joked he couldn’t paint below the fifth button. But he agreed to paint Grant, a 32-year-old Scottish barrister, perhaps because they had much in common.

When Grant arrived at the studio, he said it was so cold it was better for skating than sitting. So the two young men went skating on the Serpentine River in Hyde Park. Their athletic skating attracted attention, but then Grant’s skate hit a crack. Stuart told him to grab his coattails and he’d guide him off the ice.

Back in his studio, Stuart made the unorthodox choice to paint Grant skating.  He exhibited the painting at the Royal Academy of Art, where it was a smash hit. Stuart said that single painting lifted him to fame.

Once established in London, Stuart adopted the style of an English gentleman. His paintings commanded some of the highest prices in England. Remarkably, he painted without sketching his subject first. His philosophy was to load his pictures with color, but keep the colors separate, “No blending, tis destruction to clear & bea[u]tiful effect,” he told his pupils.

He was impetuous, unreliable, moody, a brilliant conversationalist. He enjoyed engaging his sitters. John Adams, for example, described sitting for Stuart.

Speaking generally, no penance is like having one’s picture done. You must sit in a constrained and unnatural position, which is a trial to the temper. But I should like to sit to Stuart from the first of January to the last of December, for he lets me do just what I please, and keeps me constantly amused by his conversation.

Stuart was also hopelessly improvident. In 1786, at 30, he married an exceedingly pretty 17-year-old, Charlotte Coates. They would eventually have 12 children, but seven died while still young.

They lived well beyond their means, and the next year he and Charlotte moved to Dublin to avoid debtors’ prison.

Getting Washington to Laugh

Stuart returned to the United States in 1793, hoping to paint a portrait of George Washington. He figured it would establish his reputation in the new republic.

He took his growing family to New York.  After a year and a half, they moved to Philadelphia, where Washington served as president of the United States. Stuart eventually persuaded Washington to sit for him in his studio.

The artist tried, and often succeeded, in capturing the essence of his sitter’s character. To do so he told stories and chatted while painting. George Washington, however, proved a tough nut to crack.

Finally he told an old joke about King James II. The monarch was journeying through England to improve his popularity, and he stopped in a town with a mayor named Baker. The mayor had to introduce the king, but didn’t know how. A friend jogged his elbow and said, “Hold up your head and look like a man.” The mayor repeated that admonition to the king.

Stuart later said that finally did the trick with the old general. They then chatted amiably about horses and Stuart caught the essence of his man.

Gilbert Stuart painted two portraits of Washington from that one sitting. The first, known as the Lansdowne portrait, was a full-length portrait intended for William Petty, Lord Lansdowne, the former British prime minister. Stuart concentrated on Washington’s face and finished the rest of it later. 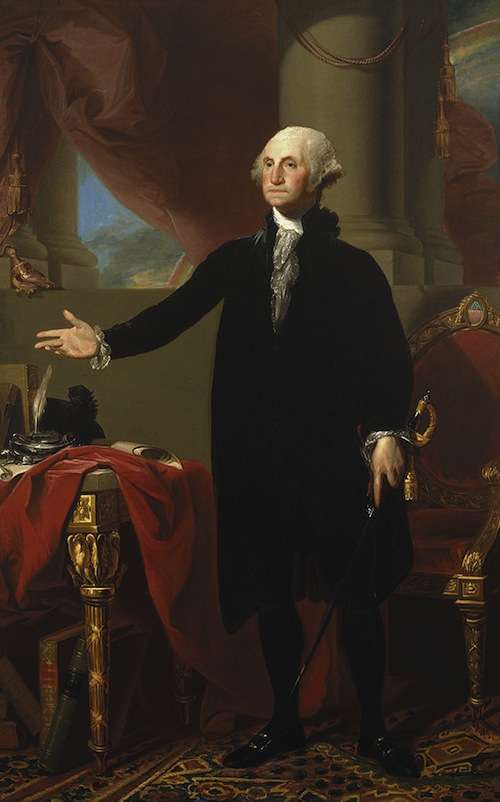 He made several copies of the painting, one of which hangs in the East Room of the White House. That was the painting of Washington that First Lady Dolley Madison rescued when British soldiers advanced on the capital during the War of 1812. Other accounts have the doorman and the gardener removing the portrait.

The second painting, perhaps the most famous in America, was intended for Mount Vernon, along with a companion portrait of Martha Washington. Stuart asked if he could hang on to the unfinished painting so he could make copies of it. Then, he said, he’d deliver them both to Mount Vernon.

They never got it.

Stuart called it his hundred-dollar bill painting. Every time he needed money, he’d dash off a copy of the painting and sell it to a ready buyer. The Athenaeum, by Gilbert Stuart, jointly owned by

The burdened human being is laid bare, and one sees the ravages wrought by the ceaseless anxieties of the long war years, the uncertainties of the first term, and the abuses of his political enemies. It is one of the most poignant portraits ever painted, and it is probably one of the truest…

The painting has been copied millions of times, most notably as an engraving on the one dollar bill and on a number of versions of postage stamps. John Swords, a ship captain in the China trade, took a copy of The Athenaeum to Canton, where Chinese artists made at least a hundred copies on glass. Stuart sued him and in 1802 a judge ordered Swords to cease and desist.

Making it in America

Stuart had made a shrewd career move. Once he painted Washington, he had no shortage of commissions. He painted the next five U.S. presidents, Horatio Gates, Aaron Burr, John Jacob Astor, King George III, John Jay and John Singleton Copley. He painted close to 1,000 portraits during his lifetime.

Abigail Adams wasn’t sure she’d ever get the portrait Stuart painted of her. It took him 15 years to finish, and by the time it arrived she remarked that it looked no more like her than anyone else. The delay angered her son, John Quincy Adams. “I never think of this subject without feeling against Stuart an indignation, which I wish I could change into contempt,” he wrote. “If there was another portrait painter in America, I could forgive him.” Stuart moved to Washington in 1803 and to Boston in 1805, where he lived on Devonshire Street. He died in 1828, leaving his wife and daughters so impoverished they couldn’t afford a gravesite. He was buried in an unmarked grave in the Old South Burying Ground. Eventually a memorial tablet was placed on Boston Common.

Images: Athenaeum Portrait By Gilbert Stuart – http://www.nga.gov/exhibitions/2005/stuart/philadelphia.shtm, Public Domain, https://commons.wikimedia.org/w/index.php?curid=159196. With thanks to Gilbert Stuart By Carrie Rebora Barratt, Gilbert Stuart, Ellen Gross Miles and to ·to Eleanor Pearson DeLorme,  “Gilbert Stuart: Portrait of an Artist.” Winterthur Portfolio 14, no. 4 (1979): 339-60. Accessed March 19, 2021. This story was updated in 2022.

Maine Timbers Shore Up the British Navy in 1666

[…] portrait of another ancestor, Theodore Sedgwick, by Gilbert Stuart, hangs in the Museum of Fine Arts. He was a U.S. Senator, Speaker of the U.S. House of […]

[…] was married with six known children and lived until at least 1687. He built the first dam at the Gilbert Stuart home, according to a family researcher. The Northups owned or operated the gristmill […]

[…] era. Many are now in the collection of the Museum of Fine Arts in Boston. (He didn't paint Otis; Gilbert Stuart […]

[…] rented the building as an inn for many years. It was run by the portrait painter Gilbert Stuart’s grandfather and visited by Dr. Alexander […]

[…] portrait by Gilbert Stuart shows a hunched, pasty-faced gentleman with a book in front of […]

[…] portrait of another ancestor, Theodore Sedgwick, by Gilbert Stuart, hangs in the Museum of Fine Arts. He was a U.S. Senator and Speaker of the U.S. House of […]

[…] rented the building as an inn for many years. The portrait painter Gilbert Stuart’s grandfather ran it and Dr. Alexander Hamilton stayed […]

[…] Island artist Gilbert Stuart painted one of the most famous paintings in the history of the world, the so-called Athenaeum […]

[…] Gilbert Stuart showed early promise and studied painting in England, where he made a name for himself at 26 with his painting The Skater. His work commanded high prices in England, but he spent money carelessly and almost ended up in debtor’s prison. […]

[…] rented the building as an inn for many years. The portrait painter Gilbert Stuart’s grandfather ran it and Dr. Alexander Hamilton stayed […]

[…] then rented the building as an inn for many years. The portrait painter Gilbert Stuart’s grandfather ran it, once hosting Dr. Alexander […]