Henry Knox, born July 25, 1750, was best known for his continuous military service under General Washington for the duration of the American Revolution. He commanded the American artillery and later served as secretary of war. His great achievements include organizing the efforts to haul 58 artillery pieces to Boston from Fort Ticonderoga and Crown Point to help push the British from the city. He then continued to direct the artillery throughout the war, including the successful siege at Yorktown.

On and off the battlefield, Henry Knox was a remarkable man, both for his actions and his role during the times in which he lived.

Lucy Flucker didn’t come from just any loyalist family. Her father served as the British secretary of the province of Massachusetts. At 17, she fell in love with Henry Knox, though she well knew he leaned toward the colonial rebels. You might think that upon marrying quite a bit over his station, Henry would see that his in-laws offered better prospects than following his own instincts. But it turned out differently. After their marriage, Henry and Lucy evacuated Boston when the British tightened their control over the city. Lucy’s family returned to England and she never saw them again.

Knox had a rags-to-riches-to-rags life. After his service in government ended, Knox did not return to his trade selling books in Boston. Rather, he moved to Maine where his wife had inherited considerable property. He built the Knox mansion, named Montpelier by Lucy, in Thomaston. He then set about trying to make a fortune from the Maine woods. Unfortunately, he spent his final years struggling to try to repay his loans, which by the time of his death far exceeded the value of his assets. 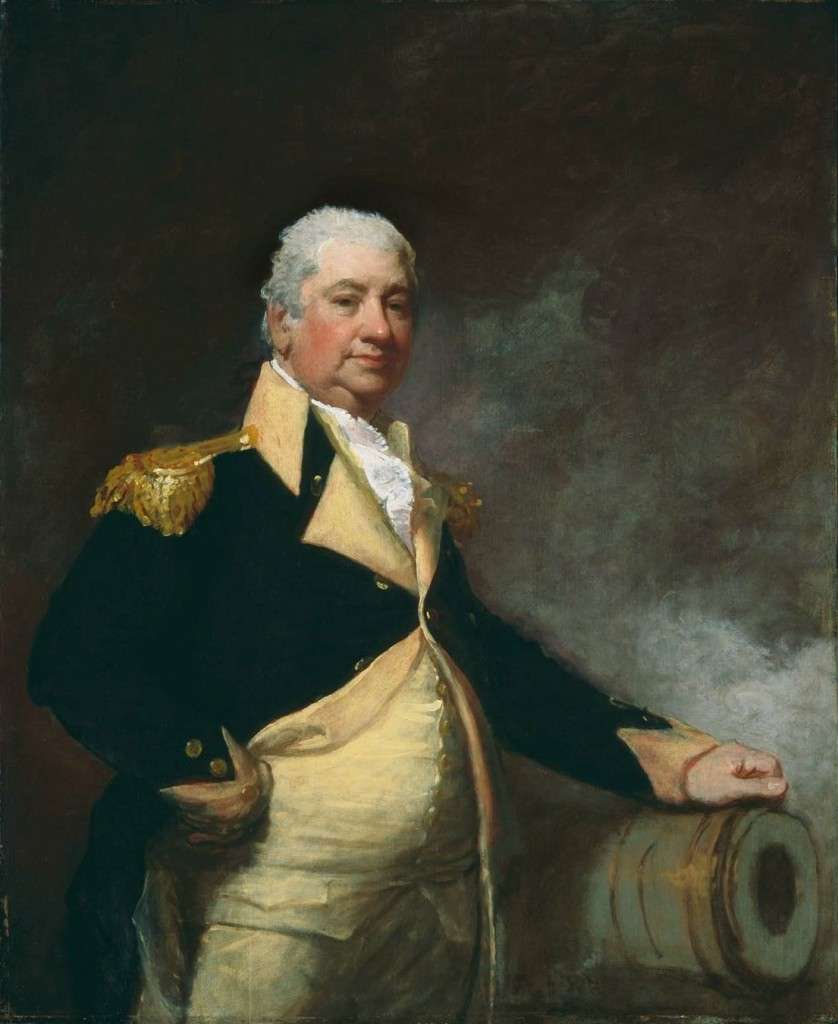 3. He fathered many things

Knox literally fathered 13 children, most of whom did not survive to adulthood.  But he also is the figurative father to the American artillery, including the industries needed to support it. Early on, he advocated the creation of the West Point military academy. And the Society of the Cincinnati, the fraternal organization that formed for Revolutionary War veterans, credits him with first proposing its organization as far back as 1775.

4. He witnessed the Boston Massacre

One of the earliest records of Knox’s life was his testimony about the events of the evening of the Boston Massacre. Knox witnessed a scuffle between some rowdy patriots and British troops. He tried to calm the situation, but failed. Knox ultimately testified on behalf of the British soldiers, providing details about what happened that night.

5. He was nearly replaced as commander of the artillery

American diplomat Silas Deane worked in Europe to recruit experienced military leaders to come assist the colonists in developing their military capabilities. He enticed French artillery specialist Philippe Charles Tronson du Coudray to join the American cause in 1777, with a promise that he would lead the artillery. General Washington had to intervene with Congress on Knox’s behalf to prevent the appointment. Washington succeeded in having du Coudray appointed to a lower position. The matter then ended in September of the year when du Coudray fell from his horse into the Schuylkill River in Pennsylvania and drowned.

6. He turned down a British commission

Several biographers claim that Knox could, if he had chosen, gotten a commission as an officer in  the British army. They report that his father-in-law, originally reluctant to have his daughter marry a bookseller at all, later tried to make the best of it by arranging a commission for Knox. Knox, however, declined the offer.

If I remember correctly, much of his problems here in Maine were caused by him trying to be a Great Proprietor. Of course, the white indians would have nothing of that. LOL

[…] Gordon departed for England. He had spent several years reviewing the papers of George Washington, Henry Knox and Nathaneal Greene, even seeking and receiving dispensation from Congress to review […]

[…] Museum of Fine Arts). Others went with Clough to Wiscasset, Edgecomb, Westport and some wound up in Henry Knox’s Thomaston mansion, probably via his son-in-law who was one of Swan’s […]

[…] the parade of celebrating revolutionaries returning to Boston, he observed the rotund form of Henry Knox, who would have been known to Byles as a bookstore operator before the outbreak of the […]

[…] family. Her father was the third highest ranking British official in Massachusetts.  She fell for Henry Knox, despite her parents’ certain […]

[…] war hero Henry Knox transplanted himself to Maine following the war and asserted, accurately, that he owned the land on […]

[…] Knox defied her rich Loyalist parents in 1774 to marry Henry Knox, a mere bookseller. After the Battles of Concord and Lexington, she never saw or heard from her […]

[…] that on Feb. 3, 1788, Massachusetts became the sixth state to ratify the Constitution. From Boston, Henry Knox wrote to Washington to say New Hampshire would surely follow its neighbor. He thought New Hampshire […]

[…] dark, with rain turning to sleet, then snow, and the Northeast wind beating on the men’s faces. Gen. Henry Knox thought it impossible to cross the […]

[…] was the Empress of China’s captain. Samuel Shaw, a 29-year-old Bostonian who had served as Gen. Henry Knox’s aide-de-camp, served as his senior business agent, or […]

[…] ground for the invasion of Quebec. Finally, and unforeseen at the time, it provided artillery that Henry Knox would haul to Boston to force the British […]

Betsy DeBlois, the Girl Who Got Away From Benedict Arnold - New England Historical Society October 25, 2018 - 6:43 am

[…] met Betsy DeBlois, then 15, at a party given by Henry Knox and his wife. His own wife had died less than two years […]

[…] had youth, ambition and the esteem of George Washington. The bear-like Henry Knox had famously led a cannon train from upstate New York to Boston during the dead of winter. […]

[…] ground for the invasion of Quebec. Finally, and unforeseen at the time, it provided artillery that Henry Knox would haul to Boston to force the British […]