In the summer of 1621, the Plymouth colonists finally had reason for optimism — until 16-year-old John Billington wandered off and got lost in the woods.

While we commemorate 1620 as the year of the Mayflower, in 1621 many of the key events occurred that led to the survival and success of Plymouth Colony. It was the “make or break” year in modern parlance. In March, the colonists made a peace agreement with Massasoit, the sachem and leader of the Wampanoag confederation. Then in June, colonists Edward Winslow and Stephen Hopkins traveled to Pokanoket to solidify the agreement. The harsh winter that had claimed the lives of one-half of the Mayflower passengers had also ended. Work was also well underway to plant crops and build the settlement at Plymouth. Landing of the Pilgrims by Currier & Ives

Then, the unexpected occurred. At some point in June or July (the primary sources differ on the date), young John Billington got lost.

Billington wandered for five days before stumbling into the Wampanoag sachemship of Manomet, just south of Plymouth. The sachem Canacum delivered the boy to Aspinet, the sachem at Nauset on the elbow of Cape Cod. Then he notified Massasoit, who notified Gov. William Bradford of John’s whereabouts. Bradford then directed a party of 10 colonists (about one-half of the colony’s adult male population at the time) to travel by boat to Nauset to recover the boy. Squanto joined them as a guide and interpreter. Tokamahamom, who Winslow described as a special friend, came along, too.

After a stop at Cummaquid (present day Barnstable), the recovery party arrived in Nauset. Nauset warriors presented them with the boy “behung with beads.” They returned to Plymouth, mission accomplished. More Than Meets The Eye

The story stands by itself as a tale of the recovery of a lost boy. However, a deeper look reveals several threads of historical significance. Those threads shed considerable light on the events of 1621 so critical to the survival of Plymouth Colony.

When the Pilgrims learned that John had been sent to Nauset, it must have given them great pause. There the Nausets had attacked a Mayflower exploratory party on a beach in present-day Eastham about seven months earlier. Furthermore, Samoset, an emissary sent by Massasoit, advised them of the Nausets’ great animosity toward the English.

The nefarious deeds of Capt, Thomas Hunt in 1614 caused their antipathy. He had kidnapped seven Indians from Nauset along with 20 from Patuxet (Squanto among them) to sell into slavery in Spain. If that weren’t enough, the Pilgrims would have known, or strongly suspected, that their earlier theft of corn had been detected. The recovery party must have felt great trepidation when it set out in the shallop for Nauset.

After departing Plymouth, the recovery party sailed into present day Barnstable Harbor to escape a storm.  The next morning, they saw two natives on the beach looking for shellfish. The party sent its two native interpreters ashore to inquire as to the status of the boy, and were told that he was well and at Nauset. The Cummaquid natives then invited the party ashore. They took them to their sachem Iyanough, who they found very friendly and agreeable. In fact, Iyanough joined the recovery party and travelled with them to Nauset to assist. Statue of Iyanough in Hyannis

History Comes Back to Haunt

While at Cummaquid, the Pilgrims received a poignant reminder of the deep wounds that Capt. Thomas Hunt inflicted with his 1614 kidnappings. In the words of Edward Winslow in Mourt’s Relation:

One thing was very grievous unto us at this place. There was an old woman, whom we judged to be no less than a hundred years old, which came to see us because she never saw English, yet could not behold us without breaking forth into great passion, weeping and crying excessively. We demanding the reason of it, they told us that she had three sons who, when Master Hunt was in these parts, went abroad his ship to trade with him, and he carried them captives into Spain by which means she was deprived of the comfort of her children in her old age.

We told them we were sorry that any Englishman should give them that offense, that Hunt was a bad man, and that all the English that had heard of it condemned him for the same; but for us, we would not offer them any such injury though it would gain us all the skins in the country. So we gave her some small trifles, which somewhat appeased her.

While the receptiveness and hospitality of Iyanough and his tribe was reassuring, this reminder from the old woman of the animosity of the Nausets must have heightened the Pilgrims’ anxiety as they continued on their mission. Upon their arrival at Nauset, Iyanough and Squanto went ashore to inform Aspinet of the reason for their visit. Then the Indians came to the shore. In Winslow’s words, they were “very thick amongst us, and were earnest with us to bring in our boat.” The Pilgrims hesitated. According to Winslow, “because we had least cause to trust them, being they only had formerly made an assault upon us in the same place, in time of our winter discovery for habitation.”

When their boat came aground on the tidal flats, a large group of Indians approached. The Pilgrims allowed two to board. One was the man who owned the corn that the Pilgrims had taken during their explorations of Cape Cod. The Pilgrims agreed to repay the debt, which ameliorated the Nausets’ animosity over the theft..  Thus, the recovery of John Billington resolved a major point of contention between the Nausets and the colonists.

After sunset, Aspinet appeared with a party of about 100 warriors through the water.  One bore the Billington boy “behung with beads.” Aspinet and about half of his party, unarmed, approached the shallop while the remainder stood by with bows ready. John was returned to the Pilgrims, and a peace agreement was made with Aspinet, thus extending the agreement made with Massasoit in March. Notably, relations between the Pilgrims and the Cape Cod tribes remained peaceful, even throughout King Philip’s War later on.

Questions About The Episode

Like many episodes in history, this one has some loose ends. While the story resonates with positive and improving relations between the Wampanoags and the Plymouth colonists, there is also some potentially conflicting evidence. When Billington came into the Indian village at Manomet, why didn’t the sachem Canacum return him directly to Plymouth, or at least to Massasoit? Why send him to Nauset, the site of much animosity toward the colonists? Historians have wrestled with this question.

Perhaps Massasoit’s leadership was not quite as dominant as he had led the Pilgrims to believe. His decision to pursue peaceful relations with the new settlers did not sit well with all of the tribes. The Billington incident may reflect this. Moreover, the great plague had dramatically altered the balance of power among the tribes. The Nausets appear to have survived that ordeal with far fewer losses. The 100 warriors who accompanied Aspinet to greet the recovery party at Nauset was larger than Massasoit’s 60 warriors at Pokanoket. Canacum’s decision to send the boy to the Nausets may have been a deferral to a more powerful neighbor. Statue of Massasoit in Plymouth

The historical record is silent on the kinds of communications, if any, took place between the various tribes on this matter, as well as on the motivations of the various actors. The Indians did not have a written language, and the English accounts that have survived were written from their perspective and from the limited knowledge that they had. Notwithstanding this, it can be reasonably concluded that the end result of this story represents a net positive result on the relations between the Wampanoags and the colonists, particularly on Cape Cod.

No account of the Billington recovery would be complete without some background on the infamous Billington family. Young John travelled on the Mayflower with his father, John Sr., his mother Ellen, and his younger brother Francis. They were not members of the separatist Leiden congregation, but were among the “strangers” placed on the voyage by the backers of the voyage to help insure the financial viability of the endeavor. The family was problematic from the start. It has been proposed that John Billington, Sr., was one of the “mutinous voices” that Bradford described which led to the Mayflower Compact. In March of 1621, Billington Sr. was tried and convicted for refusing a lawful order from Captain Standish to perform sentry duty. In 1630, he was hanged for murdering a fellow colonist in Plymouth’s first execution. Bradford wrote of him in a 1625 private letter “he is a knave, and will so live and die.”

Bradford also described the Billingtons as “one of the profanest families among them; they came from London and I know not by what friends shuffled into their company.” Young Francis contributed his share to the family’s reputation when he almost ended the Mayflower story before anyone came ashore. He fired a musket in the passenger quarters of the ship, very near the location that the ship’s supply of gunpowder was stored. 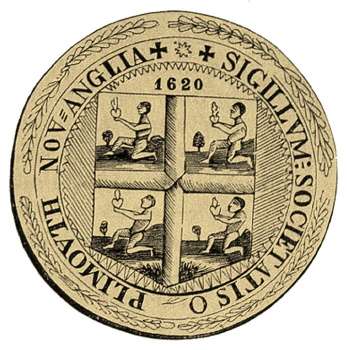 Some historians speculate that John Billington, Jr., did not wander off and get lost in the summer of 1621. They suggest he deliberately ran away to escape his family, his father in particular. Instead, he chose to cast his lot with the Indians. While this theory is plausible given what is known, there is no factual support for it in the historical record. Bradford’s account indicates that John, Jr., “lost himself.”  As a postscript, John Billington, Jr., died sometime between 1627 and 1630 in his mid-twenties, cause of death unknown.

Thus, the recovery of a lost boy tested the commitment of both sides to the peace treaty that Massasoit and Gov. John Carver agreed on a few months before. In addition, the Pilgrims paid the corn debt. They also addressed the practice of kidnapping American natives by English explorers.

Sometimes, a seemingly small story stands at the crossroads of history.

Goodwin, John A., The Pilgrim Republic, Boston, Ticknor and Company 1888

Johnson, Caleb H. The Mayflower and Her Passengers, Xlibris Corp. 2006.

Charley Parkhurst, the Gold Rush Legend With a Secret Identity