In the fall of 1789, President George Washington spent 10 days in Massachusetts, greeted by large crowds of people — with the notable exception of Gov. John Hancock.

Washington had been president six months, and he knew well the fragility of the union. He decided to knit the 13 colonies together with his personal popularity, and announced he would visit each of the states during his first year in office. 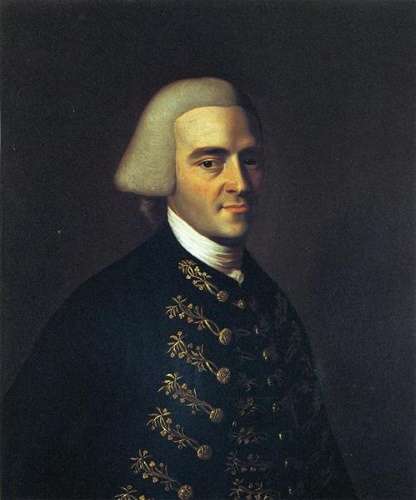 His first stop in Massachusetts was in Springfield, where he inspected the federal armory. Then he rode on to Palmer, West Brookfield, Brookfield, Spencer, Leicester and Worcester, where he received a 13-gun salute. He rode through Marlborough, Shrewsbury, Sudbury and Weston.

Everywhere he went, cheering crowds crowds greeted him. People treasured everything he touched: dishes, chairs, beds. Many towns renamed streets “Washington Street” after he rode on them.

Washington arrived in Cambridge on October 24, where he had maintained headquartered during the Siege of Boston. He was then escorted to Boston by high-ranking officials led by Lt. Gov. Samuel Adams. John Hancock was not among them.

Hancock believed he outranked Washington, who was only president of a confederation. Hancock was governor of a commonwealth. While Hancock holed up, the rest of Boston went wild celebrating Washington’s arrival. Despite Washington’s request that there be no ceremony, he was met with a grand procession from one end of the Common to the Statehouse. Lining the route were citizens grouped by trade, each flying a white silk flag with its insignia. Washington passed through a temporary arch designed by Charles Bulfinch as a chorus of young men serenaded him with a song, Washington, the hero is come.

Washington stayed in a private home, where official plans called for Hancock to pay him a visit and then host a dinner for him. A few minutes before the scheduled meeting, Hancock sent word that he couldn’t make it because of his health. Washington responded by excusing himself from the dinner.

Hancock’s treatment of Washington may have had deeper causes than his commitment to the sovereignty of Massachusetts. Years earlier, Hancock had wanted the Continental Congress to appoint him rather than Washington commander in chief of the Continental Army.

Three years after that, however, Hancock named his son John George Washington Hancock.

Mercy Otis Warren offers an explanation for John Hancock’s behavior toward Washington: He was vain and fickle.

Mr. Hancock was a young gentleman of fortune, of more external accomplishments than real ability. He was polite in manners, easy in address, affable, civil and liberal. With these accomplishments, he was capricious sanguine and implacable; naturally generous, he was profuse in expense; he scattered largesse without discretion, and purchased favors by the waste of wealth, until he reached the ultimatum of his wishes, which centered in the focus of popular applause. The people of Boston noticed that John Hancock snubbed George Washington, and they didn’t like it one bit. Hancock finally realized his behavior hurt his popularity. So the next day he sent emissaries to Washington with his humble apologies and a question: What time would it be good for Washington to see him?

Washington replied between 1 pm and 2 pm, and John Hancock showed up almost immediately – his legs swathed in bandages. His gout, he explained, prevented him from welcoming the president.

Before Old Glory, There Was the Taunton Flag

Louis Sockalexis, The Indian Athlete With the Tragic Flaw

[…] Hancock demanded to see warrants authorizing the men to search his vessel. When they couldn’t produce them, the customs officials were asked to leave. If John Hancock was not being deliberately harassed by the British customs collectors before the Lydia incident, he almost certainly was on their radar following it. […]

[…] in 1789, George Washington opined – while touring New England – that the Dighton markings were left by American Indians. They were similar, he concluded, to […]

[…] Dec. 17, 1756 in Boston and trained from a young age in the patriotism of the American Revolution. John Hancock, John Adams and Joseph Warren congregated in his father's office. On the day before his 17th […]

[…] Knox, born July 25, 1750, was best known for his continuous military service under General Washington for the full duration of the American Revolution. He was commander of the American artillery and […]

[…] Robert Mills designed it as an obelisk surrounded by a circular colonnade, with a statue of George Washington on top of it – in a […]

Daniel Webster Risks It All on the Seventh of March - New England Historical Society March 7, 2017 - 2:17 pm

[…] did others. He was told he would be greater than George Washington if he could pull it […]

[…] established the Revenue Marine, later the Revenue Cutter Service, to interdict smugglers. In 1791 George Washington named Hopley Yeaton as the first commissioned officer of what would become the U.S. Coast […]

[…] November of 1789, George Washington was traveling through Connecticut returning from his trip through New England. A man stepped out of […]

[…] Mother Goose to attract tourists to the Granary Burying Ground — as if the graves of Paul Revere, John Hancock and Sam Adams weren’t […]

[…] gave to the state, and gave, and gave. Following the Revolution, John Hancock governed Massachusetts for 11 years. His health and his fortune suffered greatly as he paid for a never-ending series of […]

[…] drought extended to the southern colonies. George Washington, in a letter dated June 20, 1762, complained about […]

[…] he was jealous of John, Ebenezer would get some satisfaction. He outlived his sometimes imperious brother by more than 25 years. When John died without a will in 1783, Ebenezer inherited one third of his […]

[…] Gov. John Hancock in 1792 signed the first charter for Union Bank, the forerunner of the State Street Bank and Trust […]

Six Strange Rocks of New England, From the Eubrontes to the Man-eating Stone of Glastonbery - New England Historical Society August 5, 2017 - 8:53 am

[…] to the strange rock will be in good company as Cotton Mather, George Washington and dozens of scientists have attempted to decode the meaning behind the writing on […]

[…] Brewster relied on a woman's underwear and his own seamanship to bring vital intelligence to George Washington during the American Revolution. He belonged to the Culper Spy Ring, which operated from 1778 to […]

[…] the British defeated the Continental Army on Long Island, George Washington ordered Glover’s Regiment to manage a surprise nighttime operation. On the night of Aug. 29, […]

[…] the first to stop by. Then came prophets, Indians, Alexander the Great, Napoleon, Pocahantas and George Washington. Angels visited to dictate long messages, while other spirits brought songs and dances. […]

[…] lights or if they ever even existed. But the incident tainted the Federalist Party – the party of Washington, Adams and Hamilton. ‘Blue light Federalist’ stuck as an insult until […]

Before the Famine Ships, The Irish Made Their Mark in New England - New England Historical Society March 15, 2018 - 5:40 am

[…] George Washington arrived on horseback and tried to calm the outraged Irishmen. Finally he said, "I, too, am a lover […]

[…] one of the most famous paintings in the history of the world, the so-called Athenaeum portrait of George Washington. But Washington wasn’t a Rhode Islander, so we had to look elsewhere. We found what we were […]

[…] played a leading role in the fight for independence, joining Sam Adams and John Hancock in the Sons of Liberty. In 1775, he won election as president of the Massachusetts Provincial […]

[…] someone raised a red flag – a gift of John Hancock — at the top of the tree, it meant the Sons of Liberty should meet. British soldiers later hacked […]

[…] In the early years of the Revolution (before the British trashed his farm) he hosted a dinner for George Washington and the Marquis de Lafayette. He offered them two bottles of the best French wine and 12 bottles of […]

[…] Franklin sent a plea to George Washington, asking to visit his ailing wife. Washington replied he could not countermand the Continental […]

[…] September 1776, Gen. George Washington moved his army to New York City to prevent the British from invading. He was desperate to know […]

[…] Mitchell Varnum fought against English rule in the American Revolution as one of George Washington’s generals. Then shortly after the war he fought for the rule of English law in a Rhode Island […]

[…] George Washington hadn’t avoided Robert Rogers, Nathan Hale might have survived the war. Hale and Rogers were both […]

[…] celebrants paraded through town to the homes of Gov. John Hancock and Lt. Gov. Sam Adams, where they raised a toast. The parade lasted all day and into the early […]

[…] predecessor, George Washington, had no use for the black leaders of Saint-Domingue. Nor did Adams’ vice president, Thomas […]

[…] scheduled a referendum for George Washington’s birthday, but then rescheduled, fearing residents would be on vacation. On March 2, 1946, 73 […]

[…] they arrived in Watertown, Mass., where the Provincial Congress then met. It included Sam Adams, John Hancock and Joseph […]

[…] in the costume of Indians, in defiance of royal authority, accomplished the daring exploit, John Hancock was then a merchant,” he said. “My team was loaded at his store for Amherst, N.H., and put up, […]

[…] scandal might have contributed to his eventual self-destruction. It was associated with his mentors George Washington and Thomas Jefferson, Washington and Jefferson regularly corresponded about a variety of subjects, […]