The Massachusetts Bay Colony got its start on June 14, 1630, when the Arbella came to anchor in Salem Harbor after a long, stormy voyage.

One could argue the Arbella’s arrival had a greater impact on the colonization of New England than the Mayflower 10 years earlier. Plymouth Colony struggled along for decades until the bigger and richer Massachusetts absorbed it in 1691.

The Plymouth Puritans did, however, show that a colony could survive in the New England wilderness. The Arbella was the flagship for a fleet of 11 ships full of Puritans escaping King Charles I’s repression of Nonconformist religious thought. The fleet carried about 1,000 people, the first of the Great Migration of 1630-42, during which thousands of English families immigrated to Massachusetts.

The Puritans planned the expedition well, bringing along plenty of provisions and diverse skilled laborers to ensure the colony’s survival. The leaders had wealth, which enabled them to obtain a royal charter.

Chief among the Arbella passengers was 41-year-old John Winthrop, a wealthy Puritan lawyer who led the immigrants. They would create new homes in a new colony “to do more service to the Lord.”

“We shall be as a city upon a hill, the eyes of all people are upon us,” he said in his famous sermon.

The Puritans renamed their flagship after one of its passengers, Lady Arabella Johnson. Also on board were her husband Isaac Johnson. Simon Bradstreet and his wife, Ann, the first female poet to be published in North America. Importantly, the Arbella carried the charter of the Massachusetts Bay Company. The other Puritan leaders, such as Sir Richard Saltonstall, were scattered among the other ships in the fleet. 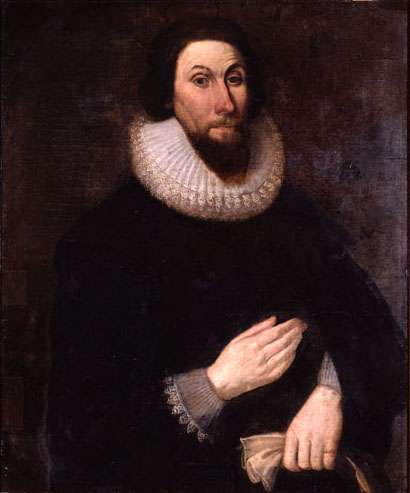 The Arbella left England on April 8, sailing nine weeks and two days on the Atlantic Ocean. The weather was cold, wet and rough. Only occasionally could the travelers cook over a fire on a calm sea. The stormy weather caused seasickness. Winthrop on May 3 wrote:

A maid-servant in the ship, being stomach-sick, drank so much strong water, that she was senseless, and had near killed herself. We observed it a common fault in our young people, that they gave themselves to drink hot waters [rum or other distilled liquor] very immoderately.

Winthrop anxiously followed the slow progress across the Atlantic, occasionally noting they spotted the other ships in the fleet. Sailors who didn’t follow the Puritans’ strict code of conduct were punished. On May 22, for example,

A servant of one of our company had bargained with a child to sell him a box worth 3 pence for three biscuits a day all the voyage, and had received about forty, and had sold them and many more to some other servants. We caused his hands to be tied up to a bar, and hanged a basket with stones about his neck, and so he stood two hours.

A week before they landed it was calm enough to catch fish. They “heaved their hooks,” and caught 26 cod, some a yard-and-a-half long – just as their salt fish ran out.

On June 8, the Arbella passengers and crew caught sight of land. Two days later, they had a fine fresh smell of land. And two days after that, some passengers went ashore and picked strawberries on Cape Ann.

On June 14, 1630, the Arbella sailed into what is now Salem Harbor. John Winthrop wrote in his diary:

In the morning early we weighed anchor, and the wind being against us, and the channel so narrow as we could not well turn in, we warped in our ship and came to an anchor in the inward harbor.

In the afternoon we went with most of our company on shore, and our captain gave us [a gun salute of five pieces.

Over the next few days, the other ships would arrive.

The Revolutionary Flags That Fell to the Stars and Stripes

My ancestor arrived with this fleet.

[…] He made the mistake of feuding with Andrew Wiggin, son-in-law of the powerful Puritan magistrate Simon Bradstreet. […]

[…] He made the mistake of feuding with Andrew Wiggin, son-in-law of the powerful Puritan magistrate Simon Bradstreet. […]

My 9th great grand father Thomas minor was aboard that ship.

[…] post rider to show her the way. The 38-year-old came to New Haven to help settle an estate. She was well-bred, well-educated and had a sharp, if condescending, […]