Ever since George Worthylike climbed the steps to light the lantern at Boston Light in 1716, lighthouse keepers have practiced an extreme form of social distancing. But lighthouses often stood on barren ledge far out to sea, and life could get lonely for the keeper and his family. Some lighthouses are said to be haunted by the ghosts of lighthouse keepers driven mad by the monotony and isolation.

The problems faced by lighthouse keepers, in fact, sound very much like the challenges faced by people under shelter-at-home orders during the 2020 health crisis.

Getting a decent haircut, for example, can be hard when you live 25 miles out to sea. Such was the case with Mrs. Roscoe L. Fletcher, who described her lonely life to a newspaper reporter on Jan. 2, 1943.  She was married to the lighthouse keeper at Matinicus Light, well off the coast of Rockland, Maine.

“I am enclosing a photo of a lighthouse haircut. It may be amusing to those who can have a choice of numerous barbershops at any hour of the day,” she wrote. “If my husband doesn’t have an opportunity, on account of weather conditions, to get his hair cut at either of the islands, I have to get up the courage and try.”

In the days before Netflix, boredom posed a serious problem for lighthouse keepers. In the 1890s someone visited Minot’s Ledge Lighthouse, which sits on a rock off the coast of Scituate and Cohasset in Massachusetts. The keeper told the visitor, “The trouble with our life here is that we have too much time to think.” Elson and Connie Small were stationed in Maine lighthouses for 29 years–without electricity until 1946. Connie wrote, “Cooped up on a rock together for months on end, seeing no one else, we’d sometimes get mad at each other.” Eldon would go off by himself to the engine house, or Connie would go stand on a ledge by the sea for several hours.

Lighthouse keepers often kept themselves busy with gardens, but some of the lighthouses on the Maine coast sat on barren rock. At Saddleback Ledge, the lighthouse keeper managed to grow some pea vines, potatoes and oats from his trash. Keepers brought dirt from the mainland to Mount Desert Rock and Boon Island to make container gardens.

In 1876, the Lighthouse Board started sending about 40 books in wooden cases to the most isolated lighthouses. There were 50 little libraries that first year, another hundred the next. By 1885, there were 420 libraries. The keepers had to exchange them every three months during the quarterly inspection. No one knows how long they lasted, but there were 351 libraries by 1912.

Lightship crews faced the same monotony and isolation that lighthouse keepers did. Lightships were essentially floating lighthouses with a beacon and a fog signal. They had to be manned 24/7 with a good lookout at all times

The sailors say that before they have been ten days on a shift they are bored to death of one another’s company. For five days or so at the start they play checkers and chess, and have an occasional game of cards. That soon palls. [. . .] Five days before it is time for shore-leave some of the men are scarcely on speaking terms. 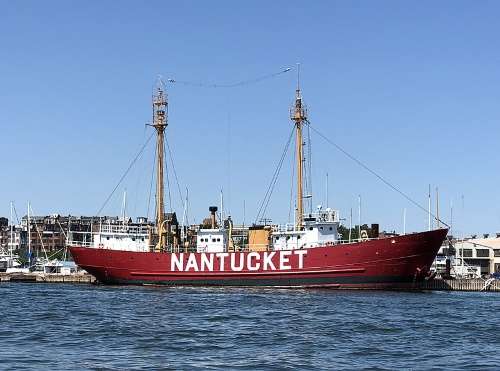 Bernie Webber, in Lightships, Lighthouses, and Lifeboat Stations: A Memoir and History wrote on a Nantucket Lightship WAL-534, a captain and chief engineer didn’t get along. They were the only two who ate in the wardroom. They hung a curtain down the middle of the table so they didn’t have to look at each other during meals.

Worse than Nantucket may have been the South Shoals Lightship, which combined the horrors of isolation with the pitching and rolling of the sea. An old whaling captain once said, “The loneliest thing he had ever seen at sea was a polar bear floating on a piece of ice in the Arctic ocean; the next loneliest object was the South Shoal Lightship.”

The crewmen aboard the Nantucket lightships found a way to alleviate their boredom: making baskets. Hence the Nantucket Lightship Basket, which today sell for hundreds of dollars.

For some asocial keepers, lighthouses were an introvert’s heaven. For others they amounted to sheer hell. The isolation of the Phippsburg, Maine, lighthouse, for example, drove the lighthouse keeper to madness and murder. Today a piano-playing ghost is said to haunt Seguin Lighthouse. The story goes that the lighthouse keeper in the mid-1850s bought his wife a piano to keep her from getting bored. But she only had one piece of sheet music. And so she played the same song over and over and over, driving her husband mad. Finally he chopped the piano to bits, then killed his wife and himself. Sometimes people say they hear piano music floating on the breeze at Seguin Island.

New London Ledge Light, a short tower atop a squat building on a hunk of ledge in the Thames River, actually lies within the borders of Groton. Ledge Light’s fame rests with a ghost named Ernie, real name (according to a psychic) John Randolph. Ernie opens and shuts doors, turns the television on and moves things around. The story of Ernie, aka John Randolph, goes like this: During the 1920s, John Randolph brought his wife to live on Ledge Light after winning an appointment as lighthouse keeper. His wife couldn’t stand the loneliness of living on a tiny island with all the lights of the city beckoning to her a mile away. She began flirting with fishermen and harbor pilots, and one day she left John Randolph. Desolate, John Randolph climbed to the top of the lighthouse, cut his throat and fell 65 feet to the ground.

Ernie’s legend lived on, but one lighthouse keeper’s daughter didn’t believe it. Barbara Beebe Gaspar’s father kept the light going during the 1930s, and she concluded the story of Ernie arose from bored and lonely lighthouse keepers.

In 1987, a Coast Guard crew member stationed at Ledge Light wrote in the logbook:

“Rock of slow torture. Ernie’s domain. Hell on earth—may New London Ledge’s light shine on forever because I’m through. I will watch it from afar while drinking a brew.”

When John Alden Went to Jail for Murder