Home Business and Labor The Mad Hatters of Danbury, Conn. The 19th-century hat factories of Danbury, Conn., made physical wrecks of thousands of workers. They turned them into mad hatters with symptoms known as the Danbury shakes. 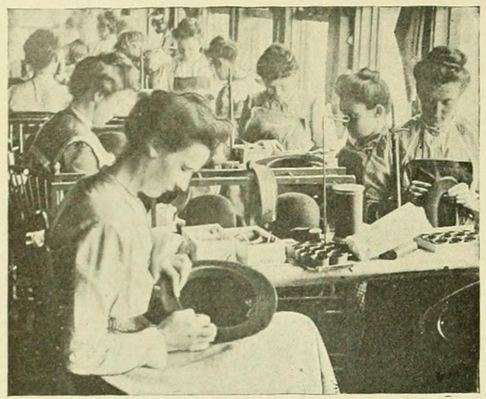 A Danbury hatter binding a hat.

Danbury’s hat-making history goes back to the late 18th century. According to local legend, a man named Zadoc Benedict plugged a hole in his shoe with fur. He found sweat and friction turned it into felt.

Benedict began making felted fur hats on his bedpost and eventually opened a hat shop on Main Street. Others followed, setting up small hat shops in Danbury. By 1800, Danbury made more hats than any other U.S. city.

By the 1880s, industrialization and consumer demand fueled the growth of Danbury’s hat factories, which produced 5 million hats a year. People called Danbury ‘Hat City’ and  formed baseball teams called the Danbury Hatters. A lighted sign proclaimed ‘Danbury Crowns Them All,’ and the city put a derby hat on its seal.

Working in the factories was awful. By the outbreak of the Civil War, doctors knew the symptoms of mercury poisoning. But no one did anything about it for almost a century.

To make hats, workers matted together rabbit or beaver skins and smoothed them with an orange solution containing mercuric nitrate. Hatters then shaped the resulting felt  into large cones, shrank them in boiling water and then dried them. In 1851, the workers formed the hatter’s union. That year they reported on working conditions in an effort to improve them. One worker said:

So much steam, you didn’t only want to wear a rubber apron in front of you, but also over your head; there wasn’t any ceiling; the steam rising to the rafters, condensed and came down like rain.

According to the report, “Unknown to the workers it was a rain of death from the fumes of nitrate of mercury.”

I suspect I had it too, but I wouldn’t go to the doctor. If a worker claimed compensation, he got on the blacklist of the manufacturers — he couldn’t get another job unless he’d sign a waiver against future claims. The first clinical description of the problem was published in 1860. However, the U.S. Public Health Service didn’t study it until 1937 after prodding by the hatters’ union.

A British Journal of Industrial Medicine article described the mad hatters’ symptoms in 1946:

The man affected is easily upset and embarrassed, loses all joy in life and lives in constant fear of being dismissed from his job. He has a sense of timidity and may lose self control before visitors. Thus, if one stops to watch such a man in a factory, he will sometimes throw down his tools and turn in anger on the intruder, saying he cannot work if watched. Occasionally a man is obliged to give up work because he can no longer take orders without losing his temper or, if he is a foreman, because he has no patience with men under him. Drowsiness, depression, loss of memory and insomnia may occur, but hallucinations, delusions and mania are rare.

The most characteristic symptom, though it is seldom the first to appear, is mercurial tremor…It may be interrupted every few minutes by coarse jerky movements. It usually begins in the fingers, but the eyelids, lips and tongue are affected early. As it progresses it passes to the arms and legs, so that it becomes very difficult for a man to walk about the workshop, and he may have to be guided to his bench. Hatters in the 19th century faced a more lethal health problem than mercury poisoning: tuberculosis, then the leading cause of death in the United States.  In the close, steamy hat workrooms, hatters easily caught the disease.

The hatter’s union fought for safer working conditions. Employers dismissed their complaints. They said the mad hatter symptoms — tremors and hallucinations — resulted from drunkenness and tobacco use.

After the turn of the century, court decisions that favored anti-union employers weakened the hatters’ unions.

In 1901 the United Hatters of North America went on strike against the Danbury hatmaking factory of D.E. Loewe & Co. Dietrich Loewe brought in scabs, and the unions successfully boycotted his hats, damaging him financially. Loewe sued the American Federation of Labor (AFL), the officers of the local hatters’ union and 250 rank-and-file members of the hatters’ union who lived in Danbury and Norwalk.

The case twice went all the way to the Supreme Court, which held the union unlawfully restrained trade. Loewe was awarded about $250,000, and the individual defendants had to pay his judgment. The company attached their paychecks and they faced losing their homes.

The AFL held a Hatter’s Day, in which union members throughout the United States donated an hour’s pay to the hatters. The judgment was paid and the workers kept their houses.

During the 15 years the Danbury Hatters case moved through the courts, a socially prominent doctor who lived in Hadlyme, Conn.,  took up the cause of workers who got sick on the job. Alice Hamilton with her sister Edith Hamilton, the classicist, had attended Miss Porter’s School in Farmington, Conn., about 50 miles from Danbury. She earned a medical degree and joined Jane Addams’ settlement house, Hull House, in Chicago. Living with poor workers, she got interested in the injuries and illnesses they suffered on the job.

Alice Hamilton pioneered the fields of industrial hygiene and occupational epidemiology. In 1919 Harvard Medical School appointed her an assistant professor in the new Department of Industrial Medicine– its first woman faculty member. Hamilton investigated mercury poisoning and in 1922 produced a report.

Three years later, the Workers’ Health Bureau of America and the United Hatters of America promoted Hamilton’s findings. They reported on the Danbury shakes:

…[of] 100 union hatters of Danbury, Conn., examined by experts, 43 had mercury poisoning… Boys 20 and 21 years old are already so badly poisoned that their hands shake continually, while many of the men who have served longer at the trade cannot even feed themselves.

The report also concluded the symptoms did not result from alcohol and tobacco use, as employers had claimed.

Finally, on Dec. 1, 1941, Connecticut banned the use of mercury in hat making. Hat makers instead used hydrochloric acid, a safe alternative. For years thereafter, they celebrated the December 1 anniversary.

But it was almost too late. The hat industry had declined, and by 1923 only six hat factories remained in Danbury. The city’s last hat factory, Stetson, closed its doors in 1965.

Though the hat industry vanished from Danbury, the mercury hasn’t.

The Environmental Protection Agency declared the land on which the hat factories stood a Superfund clean-up site. The sediment of the Still and Housatonic Rivers contains traces of mercury to this day.

In 2003, the state of Connecticut planted on a hat factory site Eastern cottonwood trees  genetically engineered to absorb mercury. The trees, however, emit mercury into the air.

[…] 26, a cold, wet, exhausted messenger arrived at the Ludington home to say the British were burning Danbury, about 20 miles […]

[…] a music studio on the property, which has been preserved and is open to the public in downtown Danbury. They involved themselves in Danbury’s civic life. She joined the Danbury Music Centre board of […]

[…] scholar Edith Hamilton graduated from Miss Porter's. So did her sister  Dr. Alice Hamilton, the first woman faculty member of Harvard University Medical School and founder of the field of […]

At Half His Age, Sybil Ludington Rode Twice as Far as Paul Revere ) But for the Same Reason) - New England Historical Society April 26, 2018 - 1:05 pm

[…] 26, a cold, wet, exhausted messenger arrived at the Ludington home to say the British were burning Danbury, about 20 miles […]

[…] melon heads isn’t the only one to involve deformed or mutated humans. Connecticut also has the Danbury Frog People and the Faceless People of […]

[…] Harvard professor named Alice Hamilton tried to help. She had identified the occupational dangers of the Danbury hat factories, and she […]

[…] P.T. Barnum started a newspaper in Danbury, Conn., in 1831 called The Herald of Freedom, which fought bigotry and fanaticism. He was arrested for […]

[…] mental problems to begin with, but they were probably exacerbated by his exposure to mercury while pursuing his trade as a hatter. In one of the odder incidents in his life, two prostitutes propositioned Corbett. He condemned […]

William Barton Goes From Hero to Deadbeat and Back - New England Historical Society July 10, 2019 - 7:23 am

[…] in Danbury since the 18th century — and made many of them “physical wrecks” with mercury poisoning known as the “Danbury shakes.” (After years of fighting by unions and lawyers, Connecticut […]

[…] in Danbury since the 18th century — and made many of them “physical wrecks” with mercury poisoning known as the “Danbury shakes.” (After years of fighting by unions and lawyers, Connecticut […]

[…] scholar Edith Hamilton graduated from Miss Porter’s. So did her sister  Dr. Alice Hamilton, the first woman faculty member of Harvard University Medical School and founder of the field of […]