Mammoth Cheese Rolls from the Berkshires to the White House

If you were in Washington on New Year’s Day, 1802, you would undoubtedly recall the Big Cheese of the time. No, not President Thomas Jefferson. This was an actual big cheese — a mammoth cheese, in fact.

It was 14 feet in diameter and delivered to the White House all the way from western Massachusetts. The people of Cheshire made it especially for the president. Only one town in Berkshire County — Cheshire — supported Jefferson. After the election the town’s Baptist preacher, John Leland, hatched the idea of honoring the president with the most formidable cheese the farming community could produce. He had previously lived in Virginia, where he vigorously supported Jefferson’s political ambitions.

How To Make a Mammoth Cheese

In July 1801, Leland put out a call for all Jefferson supporters to contribute as much milk and curd as they could manage. He did not welcome Federalist milk. Then Leland and a committee of townspeople set up a cheese press in a cider mill, They used it to make a block of cheese of monstrous proportions.

Accounts of its actual size and weight vary, but it’s universally reported to have been greater than 14 feet in diameter and to have weighed between 1200 and 1400 pounds.

The citizens of Cheshire imprinted the cheese with Jefferson’s personal motto: “Rebellion to tyrants is obedience to God.”

And in early November, 1801 Leland began his journey to Washington, D.C., with the cheese. Again, accounts of his travels vary. One story holds that six oxen pulled the cheese to the Hudson River and it traveled to Washington via water. Other reports say it made the trip entirely overland.

Nevertheless, it drew attention wherever it went. Leland took every opportunity to preach the Gospel to the crowds who assembled to ogle the cheese. Leland arrived in Washington in late December, and Jefferson gave him a warm welcome. Though not great friends, the two knew each other from Leland’s days in Virginia.

Always vigorous in pressing his positions, Leland gave a brief speech on New Year’s Day in presenting the cheese to Jefferson. He worked into his remarks one jab at the president when he noted the cheese was “made without assistance of a single slave.” 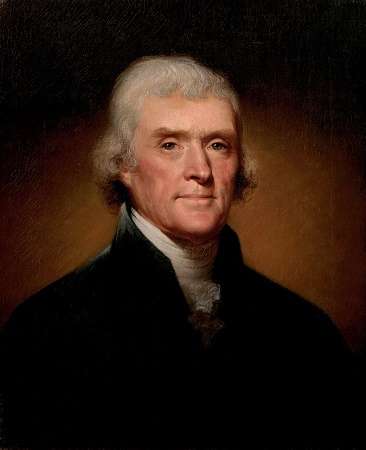 Jefferson graciously accepted the gift, by then labelled the “mammoth cheese.” Jefferson moved it into the East Room of the White House, which he renamed the “mammoth room” and served it to guests that day (and for days afterward).

According to the records at the Monticello archives, Jefferson paid the minister $200 for the cheese (he did not accept gifts while in office).

Jefferson never managed to finish the cheese. But it did last for more than a year before someone disposed of it.

Ode to the Mammoth Cheese

The story of the cheese gave inspiration to poet Thomas Kennedy to write Ode to the Mammoth Cheese. Meanwhile, the memory of the cheese lives on in Cheshire. There,  a granite statue of the original cheese press commemorates its historical significance.

Leland’s name lives on in Virginia, where the John Leland Center for Theological Studies bears his name. It has inspired several children’s books and at least one ghost tale.

The Oxford English Dictionary also notes that the “mammoth cheese” was the first known usage of the word mammoth as an adjective to describe something very large.

The Mammoth Cheese is featured on these fun history tours of the White House area: