On Sept. 16, 1920, an Italian immigrant named Mario Buda parked his horse-drawn wagon across from J.P. Morgan and Co. and down the street from the New York Stock Exchange.

Few noticed as the balding little man left his old horse and rusty wagon amid the lunchtime street bustle. Then the bells of Trinity Church chimed noon, and a deafening blast sent scores of people to the pavement. Windows shattered, shrapnel flew and a ball of flame and smoke rose to the sky. Aftermath of the Wall Street bombing.

As victims lay bleeding in the street, Mario Buda melted into the crowd.

At least that’s what law enforcement officers – and since then, historians — surmised. Mario Buda made a likely suspect after four years of anarchist terror bombings eventually linked to him. He probably blew up Wall Street because his closest friends, Nicola Sacco and Bartolomeo Vanzetti, had been charged with murder just five days earlier.

World War I had ended nearly two years before the Wall Street bombings, but the anarchist violence it spawned didn’t stop with the Armistice.

Well before the war, anarchists had allied themselves with the radical labor unions, the Industrial Workers of the World, known as Wobblies.

Inflation ate into workers’ earnings as war approached, and tens of thousands walked off the job for higher pay and shorter hours. Some of the biggest strikes in history had taken place just before the United States intervened in World War I, including the 1914 Ludlow massacre in Colorado and the 1912 Bread and Roses strike in Lawrence, Mass.

Labor unrest had spread throughout New England in such actions as the 1912 American Woolen Mill strike in Willimantic, Conn., the 1913 Ipswich Hosiery Mill strike and the 1915 Bridgeport munitions workers strike.

As the United States edged closer to World War I, anarchists battled the capitalists who, they believed, made huge wartime profits off their downtrodden workers. Anarchists rejected all authority and embraced violence in the war against capitalism.

Beginning in 1912, an Italian immigrant named Luigi Galleani led the anarchists from his newspaper office in Lynn, Mass. The Justice Department called his newspaper, the Subversive Chronicle, the ‘most rabid, seditious and anarchistic sheet ever published in this country.’ Though small, the newspaper had subscribers all over the world.

Galleani found a receptive audience in some of the 30,000 Italians who lived in Boston—including a 30-something immigrant named Mario Buda.

He was born in Sicily on Oct. 13, 1884, the son of a gardener. In 1907, then in his early 20s, he immigrated to the United States and worked as a gardener, in construction and in factories He returned to Italy in 1911, then came back to Boston’s Roxbury neighborhood two years later.

People described him as quiet, serious and proud; friends gave him the nickname Nasone, or Big Nose. Police considered him elusive and dangerous. At first he commuted to his job in a Framingham hat factory. Then he and his brother started a cleaning store selling to Wellesley College students. All the while he went to anarchist meetings and anarchist picnics, took part in anarchist theater recitals and started an anarchist school.

As an anarchist, he supported labor strikes, and he met Nicola Sacco during the 1913 Hopedale, Mass., textile strike. Police shot and killed a worker during the 12-week strike, which failed in the end.

Three years later, in 1916, he met Bartolomeo Vanzetti at the Cordage strike in Plymouth, Mass.

By 1916, the United States began to prepare for the war then raging in Europe. On New Year’s Day, a security guard discovered a wicker suitcase filled with dynamite in the Massachusetts Statehouse. It failed to go off.

But the next day, a bomb went off in Woburn, Mass., ripping apart a New England Manufacturing Co. factory. Rumor had it the company received threatening letters telling it to stop shipping goods to Europe.

Across the country, communities began to hold Preparedness Days to celebrate the military buildup for the U.S. entry into war. On July 22, 1916, an anarchist bomb went off in San Francisco during a Preparedness Day parade, killing 10 and wounding 40. Police suspected Mario Buda of setting off the bomb, but they never closed the case. Then in early December of 1916, an antiwar riot turned violent in Boston’s North End. Police arrested 10 people, including Mario Buda. In the courtroom he refused to take an oath on the Bible, and he received a five-month prison sentence.

A few weeks after the riot, a bomb rocked the North End, blowing up the Salutation Street police station. It didn’t hurt anyone, as it exploded on a quiet Sunday morning. But the bomb blew a hole through the three-foot brick wall and broke every window for blocks.

When Mario Buda left prison, he went to Monterrey, Mexico, with Sacco, Vanzetti and another Italian anarchist, Carlo Valdinoci. Monterrey had an active community of Italian anarchists, and some historians suspect Buda and his friends honed their bomb making techniques while there.

On April 6, 1917, the United States entered World War I. Boston’s district attorney warned of more anarchist violence. Though most of the city’s 30,000 Italians supported the war, police described the North End as ‘anarchist headquarters.’

Two months later, police arrested the three leading anarchists in the United States. In New York, they arrested Emma Goldman, who’d once run an ice cream parlor in Worcester, Mass., and her lover Alexander Berkman. They arrested Luigi Galleani at his home in Wrentham, Mass., for an editorial he’d written opposing the draft.

Some Italian community leaders tried to distance themselves from the anarchists. In November, the pastor of the Italian Evangelical Church in Milwaukee held a loyalty rally in front of local anarchist headquarters. A riot broke out, and police shot and killed two anarchists and arrested 11. 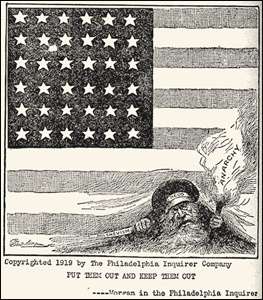 The Milwaukee killings propelled Mario Buda out of Mexico. Shortly after police shot the anarchists, someone discovered a package in the evangelical church basement. The janitor took it to the police station, where it exploded, killing nine police officers and a civilian.

Police never caught the culprit. Years later, though, anarchists revealed who made the bomb: Mario Buda.

The year 1919 brought a wave of anarchist bombings. They started when Luigi Galleani delivered an inflammatory speech in Taunton, Mass., just prior to his deportation. The next day, four anarchists blew themselves up trying to plant a bomb in the American Woolen Co. in Franklin, Mass

The new attorney general, A. Mitchell Palmer, vowed to crack down on ‘aliens and Bolsheviks, radicals, and anarchists.’

On April 28, mail bombs arrived at the homes and offices of 36 prominent men, including John D. Rockefeller, J.P. Morgan, Jr., Oliver Wendell Holmes, Jr.,–  and A. Mitchell Palmer. Only one exploded, blowing off the hands of a housekeeper.

Then in June 1919, large bombs went off within 90 minutes of each other in Boston, Philadelphia, Cleveland, Pittsburgh, New York, Washington, D.C., and Paterson, N.J. A night watchman died in the New York explosion. The bomb in Washington, D.C. blew up on the front porch of A. Mitchell Palmer. It exploded in the hands of the Italian anarchist who’d carried it, Carlo Valdinoci – one of Bruda’s traveling companions in Mexico. Valdinoci was picked up in little pieces on the front lawn of Palmer’s neighbors, Assistant Navy Secretary Franklin D. Roosevelt and his wife Eleanor.

Did Mario Bruda have anything to do with the 1919 bombings? Probably.

Palmer immediately blamed anarchists and radicals for the bombings he termed ‘terrorism.’ Beginning on Nov. 7, 1919, the FBI started rounding up suspects in what became known as the Palmer raids. Led by J. Edgar Hoover, they were notorious for violating people’s rights. The FBI threw suspects into filthy, crowded prisons without telling them why. They arrested people just for visiting prisoners in Hartford’s notorious Seyms Street Jail.

All in all, the FBI caught up 10,000 people in its dragnet, many of them Italian or Jewish from Eastern Europe. In Connecticut they raided Ansonia, Bridgeport, Hartford, Meriden, New Haven, New London, South Manchester and Waterbury. In Massachusetts they raided Boston, Chelsea, Brockton, Bridgewater, Norwood, Worcester, Springfield, Chicopee Falls, Holyoke, Gardner, Fitchburg, Lowell, Lawrence and Haverhill. And in New Hampshire, they rounded up people in Clarement, Derry, Lincoln, Manchester, Nashua and Portsmouth.

Francis Fisher Kane, U.S. attorney in Pennsylvania, resigned in protest. By such methods, he said, “we drive underground and make dangerous what was not dangerous before.”  His words proved prophetic.

Mario Buda called Sacco and Vanzetti ‘the best friends I had in America.’ Police arrested them in connection with the murder of two men during a robbery of the Slater-Morrill Shoe Company. Police had also questioned Buda, who escaped.

Prosecutors charged Sacco and Vanzetti with murder on Sept. 11, 1920. Five days later, a dilapidated wagon carrying 100 pounds of dynamite and 500 pounds of sash weights blew up on Wall Street.

Office workers were just hurrying into the street for their noonday meal when a jet of black smoke and flame rose from the center of the world’s greatest street of finance.

Then came a blast and a moment later scores of men, women and children were lying, blood covered, on the pavement.

The explosion killed 38 people and injured 143, including J.P. Morgan’s son Junius. Joseph P. Kennedy, who’d been walking by, was badly shaken but unhurt. Most of the victims were clerks, stenographers and office boys.

A letter carrier discovered several leaflets in a nearby mailbox. In crude letters, it read,

Free the Political Prisoners or it Will Be Sure Death for All of You! American Anarchist Fighters.

Federal investigators settled on Mario Buda as the perpetrator, as he had rented the horse that pulled the wagon bomb. But they never questioned him, and Buda slipped out of the country. The Wall Street Bombing case was never closed.

Mike Buda would resurface in Italy as Mike Boda and carry on his anarchist activities. He died in Italy on June 1, 1963.

The limestone walls at 23 Wall Street still bear the pockmarks of the 1920 bombing.

With thanks to The Boston Italians: A Story of Pride, Perseverance, and Paesani, from the Years of the Great Immigration to the Present Day by Steve Puleo and Sacco and Vanzetti: The Anarchist Background By Paul Avrich. This story was updated in 2022.

The Branded Hand of Jonathan Walker: Emblem of Slave Stealing or Slave Savior?

[…] on strike. Immigrants from Europe and African Americans took the blame for the labor strikes and anarchist bombings that added to the […]

[…] of the later analysis suggests that Mario Buda carried out the bombing, though officially the case was never […]