Home Arts and Leisure Molly Spotted Elk, From Poverty in Old Town, Maine, to Fame in Paris — and Back Molly Spotted Elk, From Poverty in Old Town, Maine, to Fame in Paris — and Back

In the fall of 1931, 27-year-old Molly Spotted Elk was far from home and unsure about marrying her French journalist lover. She didn’t know if two people from such different worlds could work it out. 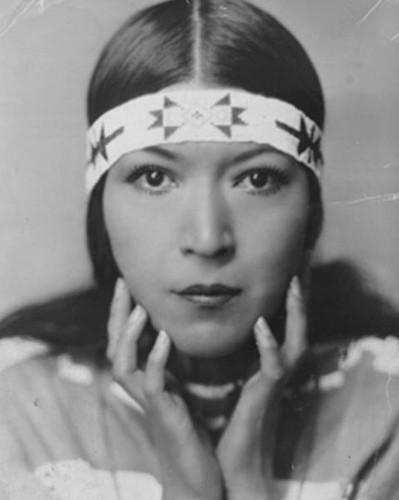 Molly Spotted Elk was the stage name for Mary Alice Nelson, a Penobscot Indian who won acclaim for her dancing in Paris. Shortly after she arrived in France, she met Jean Archambaud, a reporter for Paris Soir newspaper. Soon he was writing passionate love letters to her.

She decided to say ‘yes’ after she remembered the true story of a 17th century French nobleman who came to Acadia, married an Indian princess and became a leader of her tribe.

Throughout her life, Molly Spotted Elk felt ambivalent about her role in the dominant culture. She acted out the stereotype of the sexy savage to meet the racist expectations of white people. At the same time she strove for their acclaim as an entertainer, as a writer and as an anthropologist.

Mary Alice (Molly Dellis in Penobscot) Nelson was born Nov. 17, 1903 on Indian Island in Old Town, Maine. Her father, Horace Nelson, was the first Penobscot to attend Dartmouth College. He studied there for a year and became a governor of the tribe. Her mother, Philomena, made some of the best sweetgrass baskets in Maine.

Molly was the oldest of eight children. The family lived in a tiny white house with two windows. The children helped the family survive by selling Philomene’s baskets from tents in tourist towns. Molly learned traditional Penobscot dances and danced for tourists who stayed at the big hotels.

She took jobs cleaning houses to pay for ballet lessons in Bangor, even as she badgered tribal elders about Penobscot legends.

At 13, Molly Dellis Nelson graduated from Old Town Junior High School and went to live with the family of Frank Speck, a University of Pennsylvania anthropologist. She attended Swarthmore Preparatory School and for two years audited classes at Penn. Molly Spotted Elk contributed to Speck’s classic study of her tribe, Penobscot Man.

She needed money, though, and left school to dance on the vaudeville circuit and in Wild West shows.

In 1926, Molly moved to New York seeking fame and fortune. “Once I become famous, Mama will not have to make any more Indian baskets,” she told a newspaper reporter back home.

In New York, she described herself as ‘alone, friendless, a hungry innocent Injun girl.’ Her first job was as a nude model for Greenwich Village artists. She tried to save money for school, gave dance lessons, modeled footwear, sent money home for her mother and wrote and read: Flaubert, H.G. Wells, Proust and Joyce. She won a role in the chorus line of the Foster Girls, who, like the Rockettes, shared a stage with a motion picture. The Foster Girls traveled to San Antonio for an eight-month performance at the Aztec, which screened the Westerns of the era.

Out west, Molly earned cameo spots as ‘Princess Spotted Elk’ and pursued a writing career when she wasn’t dancing. She carried her typewriter into dressing rooms and between shows wrote poetry and adventure stories, literary fiction and traditional Penobscot tales.

When the engagement at the Aztec ended, she returned to New York and found work with Lucy Nicolar, a Penobscot entertainer 20 years her senior. Lucy, known as Princess Watawaso, led an all-Indian troupe that performed on the Keith-Albee vaudeville circuit.

Eventually, Molly Spotted Elk went off on her own performing Indian dances along with the Charleston and the Black Bottom. In one New York cabaret, she appeared in a floor-length Indian headdress and little else. She described her show business life as a ‘heartbreaking one full of promises, trouble, glamor and rush.’

In 1930, she appeared in the film documentary The Silent Enemy, playing the lead role as Neewa. Though it wasn’t a success, it has been restored as a classic.

Molly Spotted Elk left for Paris in 1931 in the ballet corps of the International Colonial Exposition. When the troupe returned to the United States, she stayed behind. She found European audiences appreciated her authentic Native American dances, unlike the Americans who preferred racist Indian stereotypes. She also worked with anthropologists and attended lectures at the Sorbonne.

Journalist Jean Archambaud asked her for an interview for Paris Soir, the city’s biggest daily newspaper. They met at a sidewalk café. He asked how she liked Paris. She said, “It is too loud, I prefer the woods.”

He was charmed. Jean liked the woods too. He also liked art, literature, history and nature – as did she. He was fascinated by her stories of her tribal culture. Within a month he wrote her a love letter:

You are the guide, a delicious guide for my clumsy footsteps.

He wanted to marry her, but she was reluctant. Then she recalled the story of Jean-Vincent d’Abbadie de Saint-Castin. He was a French military officer who came to New France around 1765 at the age of 13. He learned about the Penobscot Indians and married the daughter of tribal chief Madockawando. Her nickname was also Molly. He was adopted into the tribe and became its leader.

They married, and for a while life seemed good. They had a daughter, Jean Alice, and Molly achieved modest success dancing.

By 1933 the Depression crushed France. Molly had few opportunities to dance and Jean was fired from the newspaper. He freelanced, she took menial jobs.

Molly returned to the United States in 1934, where she danced and found bit parts in movies. She was pregnant, and gave birth to their daughter Jean Alice. In 1938, they went back to Paris to be reunited with Jean Archambaud. She worked on a book of Penobscot stories and found a publisher willing to bring it out.

Then the Nazis invaded. Molly and her daughter were separated from Jean. They never saw him again.

Mother and daughter fled Paris on foot over the Pyrenees Mountains into Portugal as German fighter planes whined overhead. Sometimes they hitched a ride on a horse-drawn cart, an ambulance or a relief truck. Molly claimed they once got a ride from journalist Howard K. Smith.

Back in the United States, Molly floated between Indian Island and New York, where she took increasingly menial jobs. She finally returned for good to Indian Island. It was, wrote her biographer Bunny NcBride,

…like an old pair of moccasins that one dreamed of during years of high-heeled city life—only to find, upon slipping into them, that they felt less comfortable than remembered because the shape of one’s feet had changed.

Molly Spotted Elk deteriorated mentally, pounding away at her typewriter until late at night and spending some time in a mental institution. She wrote children’s stories and made traditional dolls, two of which are in the Smithsonian collection.

In 1986, Molly Spotted Elk became a charter member of the Native American Hall of Honor in Page, Ariz. Her real legacy, though, is a book of traditional Penobscot stories in English and a dictionary of the Penobscot language:

Katahdin: Wigwam’s Tales of the Abnaki Tribe and a Dictionary of Penobscot and Passamaquoddy Words with French and English Translations.

British Press Gangs Cause The Boston Riot of 1747

She is so beautiful!

[…] of Minnetonka and By the Weeping Waters. The company sent her on a national promotional tour. As Molly Spotted Elk did later, she acted out stereotypes of Indians while presenting classical European music. She […]

[…] about Native-American rights, addiction, incest and war. Still, she thought she'd become a teacher back on her reservation. She earned a degree in teaching and Eastern religion in 1962, and later a PhD in Fine Arts from […]

[…] Molly Spotted Elk, she started out on her own performing Indian dances along with the Charleston and the Black […]

Joseph Orono, The Blue Eyed Indian Who Helped the Revolutionary Cause - New England Historical Society May 8, 2018 - 7:19 am

[…] disagree about his lineage. Some say he had some relation to Baron de Castine, a French nobleman who married an Indian. (Castine also had a town named after him in Maine.) […]

Please correct your information on Molly Spotted Elk. Theresa Secord is her grand niece, it even states such in the Wikipedia article you link to. Her only surviving grandchild is Barbara Moore – she posted on your Facebook page so you can easily reach out to her. The photos you posted are not all of Molly. Again, please correct your mistakes and in the future, due diligence would be appreciated. You are doing a disservice to your subscribers by providing inaccuracies.

Thank youfor pointing out the errors. They have been corrected.