The Nantucket Childhood of Lucretia Mott

A Quaker upbringing led to greatness

Many of her contemporaries considered Lucretia Mott the greatest woman of the 19th century. A Quaker minister shaped by her Nantucket upbringing, she didn’t compromise her abolitionist beliefs. She also advocated women’s rights well before almost anyone else. 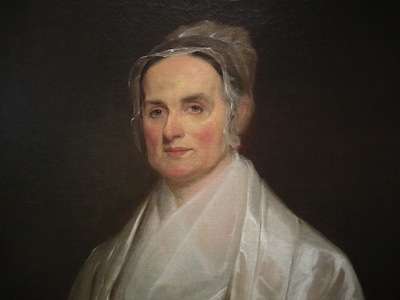 Nantucket women learned independence because their husbands spent years at sea. When her father sailed to China, Lucretia Mott’s mother kept a small store, and traveled to the mainland to trade oil, whalebone and candles for dry goods and groceries. Acting like a man in that way wasn’t unusual for Nantucket Quaker women. Quakers also gave girls the same education as boys and allowed them to become ministers – which is exactly what Lucretia Mott did at 28. Lucretia Coffin was born Jan. 3, 1793, the second of eight children by Anna Folger and Thomas Coffin, a ship captain and later shipowner.

Early on, Lucretia Mott had a problem with authority. As a child, her grandmother told her she couldn’t go on a hayride because she’d misbehaved. Lucretia Mott talked about the incident 40 years later.

More importantly, she resisted the authority of the Quaker elders who didn’t mind women’s independence but didn’t embrace women’s equality.

“We too often bind ourselves by authorities rather than by the truth,” she said.

She received the same education as the Quaker boys on the island. She later wrote, “education & intellectual culture have been for years equal for girls & boys — so that their women are prepared to be the companions of men in every sense — and their social circles are never divided.”

The whaling industry influenced her in another way: The Nantucket Quakers not only tolerated but employed Wampanoag Indians and African-Americans as crews on whaling ships. The Nantucket Society of Friends was the first in America to oppose slavery. And shortly after the American Revolution, Nantucket freed all enslaved people on the island.

Lucretia Mott saw this diagram of slaves packed into a transatlantic slave ship.

At four years old, Lucretia Mott saw a British abolitionist’s diagram of the 482 slaves packed aboard the Brooke on their voyage from Africa to Jamaica.  She told her children and grandchildren about it. She also renounced the use of products made by slaves, such as calico, sugar, rice and indigo dye – something she learned in her Nantucket school.

Mott then attended a Quaker boarding school in Dutchess County, N.Y. Becoming a teacher inspired her interest in women’s rights, as she found out men were making three times as much as she did. Lucretia Mott would move with her family to Philadelphia, marry James Mott and become a Quaker minister. But as Elizabeth Cady Stanton later said, her 11 years on Nantucket inspired the public activism that would make her famous.

With thanks to Lucretia Mott’s Heresy: Abolition and Women’s Rights in Nineteenth-Century by Carol Faulkner. This post was updated in 2023.

Benning Wentworth Grabs the King’s Masts, Along With Vermont

She was a remarkable woman. Question…was her maiden name also Mott?

^Molly, Good question! Her maiden name was Coffin (a good Nantucket name if ever there was one!)

[…] to the present and future. January 3rd was Lucretia Mott’s birthday. She was featured on the New England Historical Society’s blog and there’s a new book out on Lucretia Mott by Carol Faulkner that I plan to read (another […]

[…] by Eliza Farrar, born Eliza Ware Rotch in 1791 in Dunkirk, France. She was the daughter of a Nantucket Quaker who wanted to establish a tax-free whaling port in Europe. Her family fled the country during the […]

[…] about women’s issues. He and Arthur quit the Anti-Slavery Society in 1840 when the group added Lucretia Mott, Maria Weston Chapman and Lydia Marie Child to its board. They formed the American Missionary […]

[…] River to an abolitionist meeting. Newspapers discovered he slept in a stateroom next to Lydia or Lucretia Mott (it isn’t clear which). He finally had to explain that he had two choices: to sleep on the deck […]

[…] Elizabeth Cady Stanton met Lucretia Mott, Mott had reached her 47nd year. Born into a Quaker family on Nantucket in 1893, she learned from […]