Early New Englanders, influenced by the Puritans, celebrated holidays with reluctance. Religious festivals, they felt, were un-Christian and pagan. There was no Easter, no Christmas, but plenty of fasting and Thanksgiving.

Yet as the 1600s progressed, New Englanders began incorporating a number of festivals and celebrations into their calendar. Some survived but others, like these five old New England holidays, faded into history. Six times a year the earliest colonists had a training day, a serious occasion for maintaining arms and practicing shooting skills. Over time it evolved into an annual event. Prizes, such as a silver cup or handkerchief, were given for the best shot. Dinners were held in public squares.

Eventually training day gave way to muster day, which retained some military training functions. However, it took on a carnival spirit with much food and drink consumed.

This old New England holiday was a special festival for ministers. They would travel to the larger towns of New England for a day-long discussion of spiritual matters. That then extended to political and legal matters. The day ended with a fine dinner. 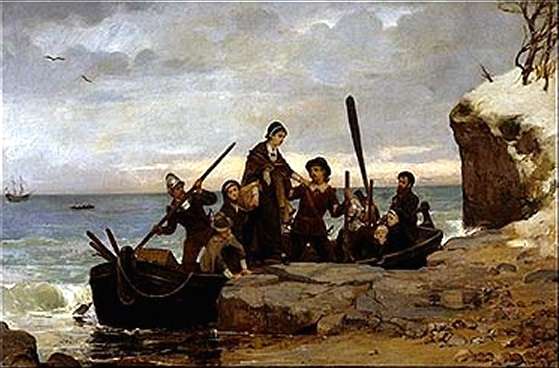 Even the earliest, flinty New Englanders didn’t mind a bit of self-aggrandizement. They held Forefathers’ Day on December 22, the anniversary of the landing of the Mayflower at Plymouth. It featured dinners, prayer and religious ceremonies praising their success in their new land.

The arrival of the shad in the local rivers, making their way upstream to spawn, evolved into another traditional festival.

The celebration had no set date. It occurred only when the shad determined the spring river waters had warmed enough for them to come up from the ocean to lay their eggs. But their arrival did cause celebration. American Indians held festivals to mark the event, and the colonists then adopted the idea for themselves. People would travel many miles to harvest the fish.

They also thought the abundant shad, like salmon, were best fit for the poor and working classes.

Windsor, Conn., still celebrates the shad with a festival.

During the ubiquitous corn husking gatherings, people traveled to their neighbor’s farm to help shuck corn to put up for the winter.

Thanks to: Customs and Fashions in Old New England by Alice Morse Earle. This story about old New England holidays was updated in 2022.

Wndsor, CT still celebrates the shad, with a festival every year.

Before Thanksgiving, There Was Forefather’s Day - New England Historical Society November 19, 2018 - 7:59 am

[…] This story was updated in 2018. If you enjoyed reading it, you may also read about colonial holidays we no longer celebrate here.  […]