In 1941, the most famous black man in the world moved with his wife and son to a 12-room Colonial house in the all-white town of Enfield, Conn. It had four tall white columns, a pool and servants’ quarters. Paul Robeson would call it home for the next 12 years.

Look magazine sent a photographer and published a spread of smiling Robeson family togetherness.  In one photo, they posed in front of shelves crammed with books. Robeson, in addition to singing and acting, had a law degree and spoke 20 languages. Robeson wasn’t the first black celebrity to move to rural, white Connecticut. Marian Anderson and her husband, for example, moved to Danbury in 1943. Jackie Robinson built a house in Stamford in the early 1950s. But like most exurbanites, Anderson and Robinson lived within a commuter train ride of New York City. Enfield sits on the border of Massachusetts, nearly 150 miles away.

So why would Paul Robeson, international star of stage, screen and concert hall, move to Enfield?

He said he liked the quiet of the country. Also, some of his classmates from Rutgers lived there.

He was born April 9, 1898, in Princeton, N.J., the son of a preacher who’d escaped slavery at the age of 15. His mother taught school, but she burned to death when Paul was six. When Paul was 10, his father moved them to the more racially tolerant town of Somerville, N.J.

In high school, Paul excelled in athletics, drama and academics and won a scholarship to Rutgers University. He sang in the glee club, won 15 varsity letters, excelled academically and played football, the only African American on the team. Walter Camp, the father of modern football, called him the greatest defense end ever. His father, who died when he was 20, wanted him to be an orator. Paul had the voice for it, a deep, melodious baritone. He also had the eloquence and the passion—for justice, for equality, for freedom.

Robeson graduated from Rutgers in 1919 as class valedictorian and moved to New York City. He joined the Harlem Renaissance while attending Columbia Law School, which he financed by playing football. In Harlem he formed a lifelong friendship with W.E.B. Du Bois.

After earning his law degree he went to work for a white law firm. That didn’t last long. When a white secretary refused to take dictation from him because of his race, he quit.

At Columbia, he met Eslanda Cardozo Goode, a brilliant chemistry student. He was on the rebound, as his girlfriend had dumped him. Essie saw his star power, and in 1921 they married. Essie pushed him toward the stage.

“Even then, I never meant to [become an actor], I just said yes to get her to quit pestering me,” he later recalled.

He joined the Provincetown Players, starring in Eugene O’Neill’s Emperor Jones. The role won him critical acclaim, but his singing catapulted him to worldwide fame.

In the 1920s, middle-class African Americans viewed Negro spirituals as embarrassing reminders of oppression. Paul Robeson not only embraced them, he sang them on the concert stage. “These were not songs of defeat,“ he said. “These were songs that aided the Negro people in their struggle.”

In 1925, he recorded “Were You There” and “Steal Away,” which immediately sold 50,000 copies. The Provincetown Players sponsored his first concert that year, accompanied by his longtime pianist, Lawrence Brown.

“[I was the] first Negro to give program(s) of all-Negro music on (the) regular concert stage,” Robeson said. “First concert (was in) New York, 1925, and since (have) sung concerts in Vienna, Prague, Budapest, Germany, Paris, Holland, London, and all of England with enormous success.”

He sang folk songs in many different languages, believing they promoted understanding among people.

In 1928, he, Essie and their young son Paul moved to London, where they encountered fewer racial barriers than in the U.S. He brought the house down with “Old Man River” in Showboat and as the lead character in Othello. Paul Robeson as Othello in the 1940s

Paul’s serial infidelity caused a strain in their marriage, and he and Essie separated for a while. But after some time apart, he and Essie reconciled in an arrangement that focused on business.

He hoped to use his art to change people’s perceptions of his race. As a film actor, he had little success.  He made movies about Africa because he thought they’d portray African culture. Instead, they glorified colonialism.

One day in London, Robeson was walking down the street on his return from a matinee performance of Showboat.

The sound of a perfectly harmonized men’s chorus stopped him cold. Then an army of ragged workmen, carrying banners, came into view.

They were Welsh coal miners, locked out of their jobs by the mine owners. The starving men walked all the way to London, singing, in search of a way to feed their families. Robeson joined the march to the end. When they stopped in front of a city building, he jumped to the top of the steps and sang “Old Man River” – along with Negro spirituals.

Robeson sent them back to the coal valleys with a railroad car full of food and clothing. From then on, Robeson was an ardent trade unionist. He sang many benefit concerts for the coal miners and other union workers – including, in Enfield, the teacher’s union.  In 1940, he starred in Proud Valley, a film about a heroic black mariner who joins a mining community in Wales. 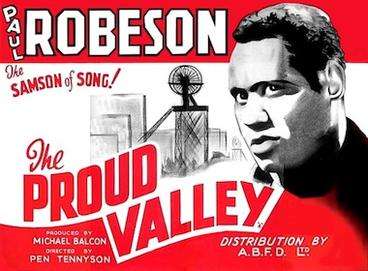 In 1934, Robeson was invited to Moscow to do a film about the Haitian Revolution. He said for the first time he was treated as a full human being. He perceived a lack of racism in the Soviet Union, and he was impressed that the Soviet constitution made racism an offense. So Robeson committed himself to socialism.

In 1937, again in Moscow, he decided his career had to take a back seat to the struggle for equality. “The artist must take sides,” he said. “He must elect to fight for freedom or slavery. I made my choice. I had no alternative.”

Those words were engraved on his tombstone.

Robeson then threw his support behind the Republicans fighting fascism in the Spanish Civil War. He gave concerts to raise money for displaced children. In Spain, he visited the battlefront and sang to wounded Republican soldiers.

The Robesons announced they had settled down to country life. But Paul Robeson didn’t take to the new home. He said it reminded him of a Southern plantation house.

In reality, the house belonged to Essie, who began to carve out her own career She wrote several books there, studied anthropology at the Hartford Seminary, traveled, lectured and joined political campaigns. Paul spent more time in New York City, visiting regularly and spending some vacations there. Paul, Jr., attended Enfield High School. Robeson was riding high in the early 1940s, playing Othello in the longest running Shakespeare play on Broadway. He also supported America’s involvement in World War II. He recorded a wildly popular song, Broadcast for America, sold Liberty bonds and sang for the Armed Forces. All along he hoped the USSR would have a positive impact on the United States.

It wasn’t to be. He continued to support the Soviet Union as the Cold War broke out.

Then in 1949, something happened in Paris that transformed him from celebrity to martyr.

Robeson traveled to France to speak at a student peace conference sponsored by the Soviet Union. He sang “Joe Hill”, then spoke extemporaneously. According to a fabricated Associated Press story, Robeson said, “It is unthinkable that American Negroes would go to war on behalf of those who have oppressed us for generations against the Soviet Union which in one generation has lifted our people to full human dignity.”

What he really said was, “We are determined to fight for peace. We do not wish to fight the Soviet Union.”

No matter. The press took up the charge of treason against Paul Robeson. From then on, he would be harassed, blacklisted and ostracized.

The NAACP denounced him. So did Jackie Robinson, under pressure from the Dodgers. Eighty five Robeson concerts were canceled.

In 1950, the State Department took away his passport. He could have had it back if he swore he didn’t belong to the Communist Party. But he refused – though privately he said he didn’t.

Four months after the Paris speech, Robeson agreed to give a benefit concert for the Civil Rights Congress in Peekskill, N.Y. Local veterans groups organized an attack on concertgoers, seriously injuring 13 with rocks and baseball bats. They tore up the stage, lynched Robeson in effigy and burned a cross on a nearby hillside. Law enforcement arrived late, and a photograph showed police and a state trooper beating a highly decorated black aviator.

Supporters decided the concert must go on anyway. Two weeks later, they tried again. Twenty thousand people came to hear Robeson, protected by a ring of union members. The concert came off peacefully after the unionists flushed out a sniper’s nest, though concertgoers were ambushed afterward.

Robeson’s income fell from $150,000 a year to $3,000. He could only play small venues, like schools and black churches. FBI agents took down the license plate numbers of those who came to listen. Though still popular overseas, he couldn’t travel without a passport.

In 1952, the Peoples’ Party ran into opposition when it tried to book Robeson for a benefit concert at Weaver High School—quite a comedown from Bushnell Memorial Hall, where he’d sung seven years earlier. The concert went off, but hundreds of police were detailed outside to prevent violence.

The FBI surveilled his Enfield house. A neighbor called the Justice Department to report a strange Dodge parked nearby. Was Robeson harboring Communists? she wondered. The Enfield police chief thought the car probably belonged to an FBI agent.

The Ku Klux Klan made death threats against Robeson and his family. So Essie installed an alarm system at the Enfield home. She also tried to get a gun, but the local police wouldn’t allow it. So she slept with a hunting knife by her bedside.

The House Un-American Affairs Committee called him to testify in 1956. Ever defiant, Robeson told them, “You are the nonpatriots, and you are the un-Americans, and you ought to be ashamed of yourselves.”

A Supreme Court ruling in 1958 gave him back his passport, but by then his career was over. He moved to Europe, where he fell into depression and illness. Then in 1963, he returned to the U.S., living quietly in Harlem and then in Philadelphia with his sister. He died on Jan. 23, 1976, following a stroke.

The Battle for The Meeting House Bell – That Wouldn’t End