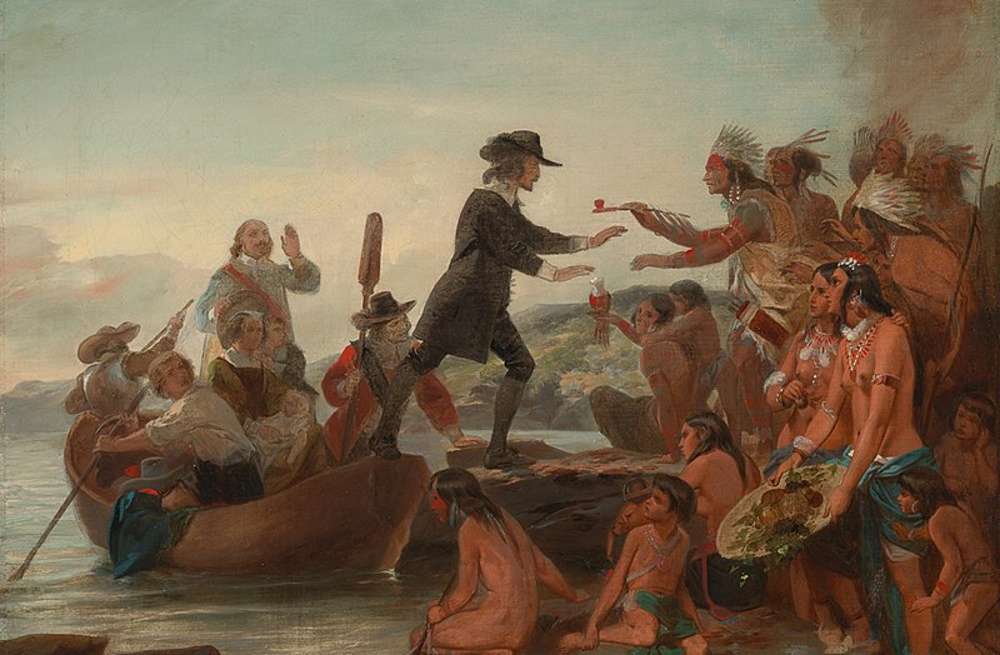 The arrival of the Lyon from Bristol, England, brought joyful relief to Puritan leaders in Boston on Feb. 5, 1631. First, because the ship carried Roger Williams, a Puritan minister who could help preach. Secondly, it brought bread to feed the hungry population.

Roger Williams soon disappointed the Puritans. He came to Massachusetts Bay Colony to escape the corruption and intolerance of the Church of England. He and his wife Mary had already decided to join the Separatists, who insisted on independent local churches. The Williamses arrived in Boston after a tempestuous 66-day voyage. Upon his arrival, Roger Williams was asked to replace the Rev. John Wilson immediately. But Wilson wanted to return to England to fetch his wife.

Williams then shocked the Puritan leaders by refusing.  The church, he said, was unseparated.

The Salem church, more inclined to Separatism, invited Williams to preach there. The Boston Puritans objected. Williams went to Plymouth, where he again fell into disfavor. He then returned to Salem.

Williams liked and trusted the Indians. In Salem, he openly questioned the validity of the colonial charter that claimed their land.  That infuriated the authorities in Boston, and they summoned him to appear before the General Court — several times. Finally they ordered him removed from his position in the church.

At the same time, the Town of Salem wanted the General Court to annex some land on Marblehead Neck. The General Court refused until the church got rid of  Williams. Williams’ support crumbled. He withdrew from his post, meeting with a few devoted supporters in his home. Roger Williams purportedly lived in this house in Salem. People now call it ‘The Witch House.’

Williams led a band of outcasts 105 miles over the snow and across the Seekonk River to Narragansett territory. Williams believed Indians should be paid for their land. So he bought property from two sachems, Canonicus and Miantonomi.

With 12 ‘loving friends’ he established a settlement called ‘Providence,’ because he believed God’s Providence brought him there. The Landing of Roger Williams in 1636 by Alonzo Chappel, courtesy RISD Museum

Williams based the settlement on principles of religious toleration, separation of church and state and political democracy. People persecuted for their religious beliefs came to Providence for refuge. The settlement attracted Jews, Anabaptists and Quakers.

Williams also tried to prevent slavery from taking root in Providence Plantations. That made him North America’s first abolitionist.

In Providence, Roger Williams formed the first Baptist church in America. Then he  left it. He stopped preaching to the Indians when he realized they had a right to religious freedom as well. Williams declared,

Hear that people ? “Forced worship stinks in god’s nostrils ” amen to that !

what an interesting man….and way ahead of his time…the Puritans left England due to religious persecution and they turned around and did the same thing..it’s different when it’s your religion….tolerance is not over rated

My ancestor Canonicus ( 15 generations back ) knew him.

8XGGF John Sheldon was one of Roger Williams radical followers!

Where is that house? It’s not the Witch House.

I went there so much history and gorgeous places! Love it!

[…] which already placed him in a difficult position with the Puritan leaders of Massachusetts who banned Baptists from preaching. But to make matters worse, the men now seeking shelter in his home were Quakers. […]

[…] hostility toward her beliefs, Moody decided to leave Massachusetts just as Anne Hutchinson and Roger Williams had. Rather than head for Rhode Island, however, Moody chose New Amsterdam (now New […]

Samuel Gorton and his Gortonites Create a Church Among the Jack-an-Apes - New England Historical Society January 8, 2016 - 8:07 am

[…] Providence. But here he didn’t even get admitted to the town since his history preceded him. Roger Williams wrote to John Winthrop: “Master Gorton having abused high and low at Aquidneck, is now bewitching […]

[…] be returned to England on the Lyon setting sail in April. (The Lyon was the vessel that brought Roger Williams to the […]

[…] a five year stay, Massachusetts chased him out of his Salem church by refusing to approve official business for the Salem unless the town got rid of Williams. Off he […]

[…] Roger Williams lived for another seven […]

[…] as a rabble-rousing, English minister who decried corruption in the Church of England. He soon rubbed the residents of Massachusetts the wrong way and was banished to Rhode Island where he studied the language of the local Indians […]

[…] anger against religious dissenters and stifle efforts to grant them greater liberty. New England, which was having its own debates about the rights of Baptists and other dissenters, was the perfect backdrop for the […]

[…] bit, spending several years in Salem, Mass. While in Salem he undoubtedly became familiar with the rabble-rousing Roger Williams, and by 1649, Mowry had relocated to Providence, R.I. where he held the privileges of a […]

[…] bit, spending several years in Salem, Mass. While in Salem he undoubtedly became familiar with the rabble-rousing Roger Williams, and by 1649, Mowry had relocated to Providence, R.I. where he held the privileges of a […]

The Revolutionary Flags That Fell to the Stars and Stripes - New England Historical Society July 11, 2018 - 8:55 am

[…] England's Puritans, led by Roger Williams, didn't think it appropriate for a flag to bear a Christian cross. So they altered the British […]

[…] Roger Williams was run out of Massachusetts as a heretic, he settled in Rhode Island. He was so pleased of escaping a trial for heresy he […]

[…] Quakers even exasperated Roger Williams, that paragon of tolerance. Though the other colonies threatened Providence Plantation with a trade […]

[…] 1636, Roger Williams and his party fleeing the Puritan fathers in the Massachusetts Bay Colony had settled in Rumford, […]