A Sad Condition: Wilmot Redd and the Salem Witch Trials

In 1692, Wilmot Redd died on the gallows because her neighbors didn’t like her.

Redd (or Reed/Read, by some accounts) was the only victim of the Salem witch trials who lived in Marblehead, Mass., Salem’s neighbor to the south. Townspeople singled her out for persecution because she had made a bad impression on many of them.

Redd, born sometime in the early seventeenth century, lived in a modest house near the foot of Old Burial Hill in Marblehead with her husband, fisherman Samuel Redd. She lived next to a small pond that now bears her name (Redd’s Pond). Redd developed a reputation for being ornery and unlikeable. She sometimes sold butter to supplement her husband’s small income. Either her butter was of poor quality or she was wrongfully blamed for it turning sour after she sold it. Regardless, she fell out with some of her neighbors over the issue.

She was also known to be irritable and curt. She became the subject of superstitious tales that circulated around Marblehead and Salem. In some of them, people accused her of using curses to kill babies and curdle her neighbors’ milk. One rhyme survives that hints at her reputation:

Old Mammy Redd
Of Marblehead
Sweet milk could turn
To mold in churn.

Redd was first accused of witchcraft in 1687, but nothing came of that accusation.

A few years later, however, in 1692, witch hysteria swept the region. Redd’s reputation inspired some of the young Salem girls who instigated the Salem witch trials to name her as one of their tormenters.

Like other Salem witch trial victims (Bridget Bishop and Ann Pudeator, for example), Redd’s unpopularity made her an easy target.  It probably did not help that Redd’s daughter married another accused witch, the Rev. George Burroughs. He was eventually hanged.

As soon as Redd arrived, four girls who had accused her of witchcraft (Abigail Williams, Mercy Lewis, Ann Putnam and Mary Walcott) fell into fits. According to official records of this “examination,” Redd was asked what she thought was wrong with the girls. She responded, “I cannot tell.” Asked again to give her opinion, she said, “My opinion is they are in a sad condition.”  When Redd touched the girls, their fits miraculously stopped.

The Trial of Wilmot Redd

Three Marbleheaders — Sarah Doddy, Ambrose Gale and Charity Pitman — testified against Redd at her trial four months later. Pitman claimed Redd had cursed a neighbor with “distemper of the dry bellyache” (constipation). The neighbor, a Mrs. Simse/Syms, had accused a girl staying with Redd (possibly a servant) of stealing some of Simse’s linen. Redd had supposedly met her at her door with a litany of curses.

The Salem girls present at Redd’s examination in Salem also formally accused her of choking and pinching them and causing other bodily harm. Mary Walcott testified that “…if [Redd] did but look upon me she would strike me down or almost choke me.” The girls gave nearly identical testimony, all painting Redd as their assailant.

The court indicted Wilmot Redd for “detestable arts called Witchcraft and Sorceries…practiced & exercised at the Towne of Salem.” Redd had no defense counsel at her trial. The court found her guilty on Sept. 17, 1692, and sentenced her to death by hanging.

On Sept. 22, 1692, Redd belonged to the last group of victims executed during the Salem witchcraft trials. Authorities brought her and seven others to Gallows Hill. The cart carrying the condemned got stuck as it made its way up to the execution site. Some of the victims’ accusers, who had assembled to watch them die, then cried out the devil was trying to hold back the cart and save the witches.

With their last words, the victims proclaimed their innocence, just as they had done during their trials.

Redd was buried in an unmarked grave.  Its location remains unknown. Today, markers memorialize Redd at Old Burial Hill in Marblehead and at the Salem Witch Trials Memorial.  Then in 2016, archaeologists confirmed her execution site at Proctor’s Ledge below Gallows Hill in Salem. Markers now memorialize the victims there as well. 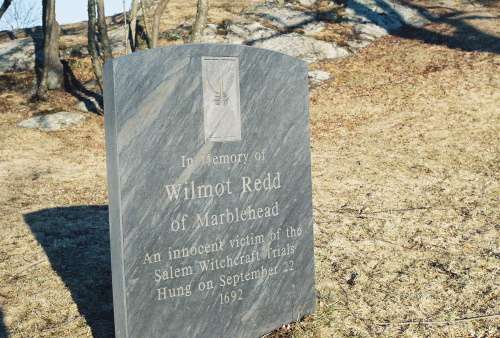 In the centuries following the witch trials, political figures pardoned the victims as a gesture of remorse for their wrongful deaths. On Halloween in 2001, Massachusetts Acting Gov. Jane Swift signed a bill that pardoned five witch trial victims, including Wilmot Redd.

This story last updated in 2022. The author of this story, Rebecca Del Giudice, is a writer and editor who lives in Massachusetts.

Thompson Maxwell, the Forrest Gump of the American Revolution

How Ptown Got So Gay, Gay, Gay