The art of making clipper ships like the Blue Jacket came down to one thing: Speed.

Clipper ships were mid-19th century merchant vessels designed to carry cargo. But shipbuilders would sacrifice cargo space for an extra knot of speed. They shaped the hulls of the clippers to cut through the water as fast as possible, and used double-strength timbers. Sailors hung massive amounts of sail in the stiffest breezes to cross the oceans at paces then viewed as wondrous. Though historians will debate what constitutes a clipper, they came into their own in the 1840s. Then U.S. merchants competed with the British to bring tea and other goods from China. But the public soon fell in love with the idea of  moving quickly across the globe.

“The oceanic nobility of the time,” gushed the Naval Encyclopedia. “Wooden cathedrals of sail,” they were “champions of rival trade companies that made the headlines, turned the heads and drew unapologetic cheers.”

Clippers began serving more and more uses. A boom in clipper building accompanied the California Gold Rush in 1849.The ships carried miners west and brought gold back east. New England, with its vast number of boatyards, naturally played a major role in the rise of the clipper. 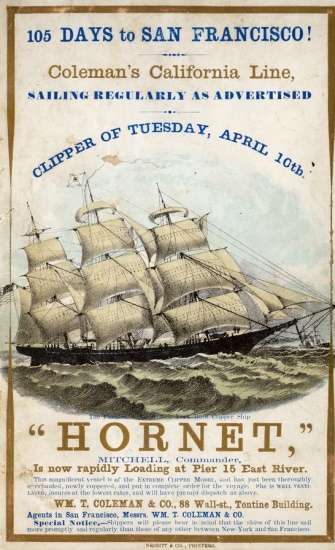 On Aug. 27, 1854, Robert E. Jackson launched the clipper Blue Jacket from his East Boston shipyard. She was a showstopper, “a very beautiful ship in every way,” wrote Octavius Thorndike Howe in 1926.

She had magnificent cabin furnishings and an 80-foot-long half poop deck. U.S. Nautical Magazine rhapsodized about the ladies’ cabin, “a miniature palace” with mahogany wainscoting, rosewood entablatures and gilt scrollwork.

The figurehead, a sailor in a blue jacket, gave her a name. Blue Jacket was slang for sailors in the American and British navies, “Bluejackets.” The figurehead included a carving, “Keep a sharp lookout!” Her first voyage to Liverpool took a speedy 12 days. Upon arrival, Boston merchants E.R. Seccomb and Isaac Taylor sold her to Londoner James John Frost, who put her into service between England and Australia.

She made her first journey from Liverpool to Melbourne in 68 days. Only one other clipper had matched that record and only one had beaten it. She would repeat the feat many times. Then she went from London to Madras to Mauritius, where she loaded 600 “coolies” — low-wage workers.

A commentator noted, “The splendid Blue Jacket, now owned in London, arrived yesterday, landing 600 coolies from Madras at three pounds a head. Is no loading for London with sugar at three pounds, ten shillings per ton. The Immigrant Agents prefer American clippers because they make the shortest voyages and deliver the coolies in better condition than vessels of other nations.” Further, the commentator noted, “The model, finish and build of this vessel, with her cabin arrangements, have completely astonished the people of this island.”

The ship provided good service until Feb. 11, 1869, when she took her final voyage.

She set off from Lyttelton, New Zealand, with a cargo that contained tallow, furs, gold and flax. On March 5, the crew discovered a fire below decks as the ship was passing the Falkland Islands. After fighting the blaze for days, it became clear by March 9 the crew was fighting a losing battle.

The crew and passengers took to a small cutter and two lifeboats. The 37 passengers and captain on the cutter with the crew manning the lifeboats. Each vessel carried one-third of the gold shipment, as well.

“The last we saw of the Blue Jacket was a bright speck on the horizon on the evening of the second day,” one passenger would recount. Accounts vary, but the lifeboats apparently got separated, over the next several days, and were not seen again.

A passing ship, the Pyrmont, spotted the castaways in the cutter and brought them to safety.

Robert Jackson would continue making clipper ships into the 1870s in his East Boston shipyard, but the era ended abruptly with the arrival of motor-powered vessels. The only reminder of the Blue Jacket was her figurehead, which washed up on the shore of Rottnest Island off Australia some two years later. It showed charring from the fire, but was recognizable as the reliable Blue Jacket sailor who proudly adorned the bow of the Blue Jacket in her heyday.

[…] that had departed at the same time were conducting a friendly race to San Francisco. The need for speed was anything but trivial. A captain might earn $3,000 for a successful voyage from New York to San […]