The Great New England Earthquake of 1663 collapsed walls and frightened colonists from Quebec City to New York, but Puritan ministers and Jesuit priests saw a silver lining. People flocked to church in the immediate aftermath.

No one had much question that the tremors came from God. Clearly He was trying to tell sinners something. Opinions varied as to exactly what.

The Great New England Earthquake of 1663, also known as the Charlevoix Earthquake, started along the Saint Lawrence River, between the mouths of the Malbaie and Ouelle rivers.  Geologists estimate it measured 7.3 to 7.9 on the Richter scale. It wreaked the most damage in Canada, but in Boston and Portland it toppled chimneys, tossed pewter off shelves, shook houses and sent frightened men and women into the streets.

On the Monday evening of Jan. 26, 1663, New Englanders sitting inside their homes suddenly heard a peculiar roaring sound. It grew louder and louder, and houses shook and rocked. “The tenons of the timbers moved in and out of their mortises,” wrote historian Sidney Perley. People who stood when the shaking began had to sit or fall down, he wrote.

According to a contemporary account in Canada, the heavens were serene around 6 pm on Jan. 26 (Old Style), 1662-3, when all of a sudden a roar erupted ‘like that of a great fire:’

“Immediately the buildings were shaken with amazing violence. The doors opened and shut of themselves, with a fearful clattering. The bells rang without being touched. The walls split asunder. The floors separated, and fell down. The fields put on the appearance of precipices, and the mountains seemed to be moving out of their places: and amidst the universal crash which took place, most kinds of animals sent forth fearful cries and howlings.”

Boston suffered the most damage, followed by the coastal communities of Massachusetts Bay. The Great New England Earthquake of 1663 toppled chimneys, but it didn’t kill anyone.

The aftershocks continued for days, and the earth didn’t stop shaking completely until July.

In New England and in New France, the people became more pious — at least for a while.

This story about the Great New England Earthquake was updated in 2022. With thanks to Historic Storms of New England: Breathtaking accounts of powerful storms on land and sea, by Sidney Perley. The Great Boston Molasses Flood of 1919

On Jan. 15, 1919, an enormous molasses storage tank burst in Boston’s North End, and a 25-foot-high molasses flood surged through the streets at 35 miles per hour.

The molasses flood covered one of the densest commercial sections of Boston, with a busy port and a railway terminal.

In the end, the sugary tsunami killed 21 people, including 17 workers, and injured 150. It took months to clean up and recover all the victims. The molasses disaster also resulted in a lawsuit that set the stage for increased government regulation of corporations. The tank, 50 feet high and 90 feet in diameter, contained 2.3 million gallons of molasses originally destined for use in a  munitions plant.

The tank, though only a few years old, seemed shaky. People who lived and worked in the North End said the tank shuddered and groaned when the company filled it.

Shortly after noon, the tank collapsed with a thunderous roar. The ground shook, and witnesses said the rivets popping out of the tank sounded like machine gun fire.

The deadly ooze damaged the Boston Elevated Railway on Atlantic Avenue. It then tipped over a rail car and knocked buildings off their foundations. The molasses surge picked up a truck and threw it into Boston Harbor.

A  small boy named Anthony di Stasio got caught in the molasses flood. According to a 1983 article in Smithsonian,

Anthony di Stasio, walking homeward with his sisters from the Michelangelo School, was picked up by the wave and carried, tumbling on its crest, almost as though he were surfing. Then he grounded and the molasses rolled him like a pebble as the wave diminished. He heard his mother call his name and couldn’t answer, his throat was so clogged with the smothering goo. He passed out, then opened his eyes to find three of his four sisters staring at him.

Inside the Boston and Worcester freight terminal, the river of molasses poured through the doors and windows. It killed workers like trapped animals.

While outside, the wall of goo trapped some unlucky victims, hurled some into the air, flung some against freight cars and smothered still others. The molasses was waist deep in the streets, and covered struggling forms trying to escape the sticky mass. People couldn’t tell the difference between men, women, children or horses. The more they struggled, the more the molasses ensnared them.

Over a hundred cadets from the training ship USS Nantucket, docked nearby, ran to the scene to rescue victims and keep onlookers away from danger. Then the Boston police, US Army soldiers and  Red Cross personnel arrived  and tried to make their way through the syrup to help those caught in it. Doctors and nurses set up a makeshift hospital in a nearby building. Rescuers spent the next four days searching for victims. Finally, they gave up.

Months later, casualties of the molasses disaster washed up from Boston Harbor.

Hundreds of people helped the cleanup effort, and they tracked molasses all over the city. For months it seemed that anything a Bostonian touched was sticky: pay phones, T seats, sidewalks and subway platforms. The molasses even made its way into private homes, and some said it got tracked as far as Worcester.  The harbor didn’t lose its brown tinge until summer. 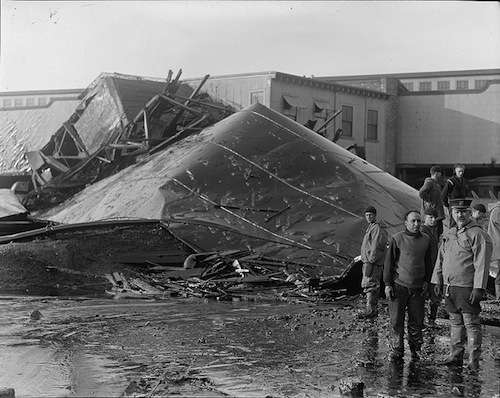 The Boston Evening Globe reported the boiling sludge buried scores of people inside ruined buildings, killing some and badly injuring others.

Fragments of the great tank were thrown into the air, buildings in the neighborhood began to crumple up as though the underpinnings had been pulled away from under them…

The explosion came without the slightest warning. The workmen were at their noontime meal, some eating in the building or just outside, and many of the men in the Department of Public Works Buildings and stables, which are close by, and where many were injured badly, were away at lunch.

The Globe then reported no one had a chance to escape once they hear the low, rumbling sound. Buildings seemed to crinkle as though made of pasteboard.

In the aftermath, local residents filed a class-action suit against the company, Purity Distilling Company. Purity claimed anarchists blew up the tank, but investigators found it was poorly constructed and never tested for safety. When filled, it leaked molasses. So the company painted it brown to hide the leaks. Neighborhood children brought pails to the tank and filled them with leaking molasses. The lawsuit resulted in Purity paying $628,000 in damages, including $7,000 each to the families of victims. The trial set a precedent for expert witnesses, as engineers, metallurgists and architects testified. The molasses disaster also improved the government’s oversight of corporations. According to Stephen Puleo, author of Dark Tide: The Great Boston Molasses Flood of 2019 :

All the things we now take for granted in the business, that architects need to show their work, that engineers need to sign and seal their plans, that building inspectors need to come out and look at project  — all of that comes about as a result of the great Boston molasses flood case.

What Caused the Molasses Flood?

Nearly 100 years later, a new study found the cause of the molasses disaster: steel too thin and brittle to withstand the pressure of 2.3 million gallons of molasses. Ronald Mayville, a structural and metallurgical engineer, wrote in Civil and Structural Engineer Magazine that the steel was 50 percent too thin. Engineers should have known that in 1919, he wrote.

They didn’t know then that the steel didn’t contain enough manganese, which made it more likely to crack. The Titanic also used the same kind of steel.

And in 2016, Harvard University scientists concluded the molasses disaster would have killed fewer people had it happened in the summer. They figured the winter air cooled and then thickened the goo, making it harder to rescue victims.

With thanks to Dark Tide: The Great Boston Molasses Flood of 1919 by Stephen Puleo. This story about the Boston molasses flood was updated in 2023.