You’ll find thousands of kettle holes in New England, but you won’t find them everywhere in the United States. They can be ponds, lakes or bogs, but they always result from an iceberg that calved from a glacier and then melted.

Geologist Robert Thorson calls them “fossil icebergs” in his book, Beyond Walden: The Hidden History of America’s Kettle Lakes and Ponds.

Kettle holes came about with the retreat of the Laurentide ice sheet, which covered much of Canada and the northern United States. The icebergs it left behind got covered with sediment until they melted.

Kettle holes dimple the landscape south of the Great Lakes, Adirondacks and New England mountains. They then end around the 37th parallel along the southern borders of Missouri, Kentucky and Virginia. Thorson calls them a “blue galaxy” within 19 “kettle states.”

Collectively, writes, Thorson, “they form a galaxy of approximately 100,000 blue dots on the American landscape. Ranging from the parched prairies of the western high plains and the foggy, boggy moorlands of eastern Nantucket, this galaxy is widest near the center between Michigan’s upper peninsula and central Indiana.”

America has two famous kettle holes, one mythical, the other with mythical status. They are Lake Wobegon in Minnesota and Walden Pond in Massachusetts. Though fictional, Lake Wobegon is clearly one of Minnesota’s many kettle lakes, wrote Thorson. He has also observed central Minnesota’s kettle holes most resemble the ones in New England.

Thoreau had a spiritual relationship with Walden Pond, calling it “heaven beneath us.” “A lake is the landscape’s most beautiful and expressive feature. It is earth’s eye; looking into which the beholder measures the depth of his own nature,” he wrote. 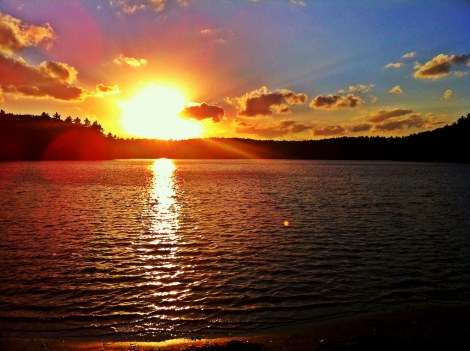 Minnesota, wrote Thorson, was the only state outside of New England to which Thoreau traveled. When he visited, he noticed that half the people he met came from Massachusetts and the lumbermen all came from Maine.

Wondering where there’s a kettle hole in your state? Here’s a short list of them.

The Gift of the Glacier 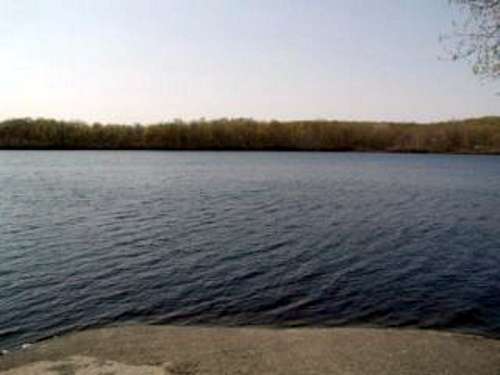 “The entire Connecticut landscape is a gift of the glacier,” writes Thorson.

The Connecticut River Valley, New England’s breadbasket, was once a tropical salt lake. The glacier then dredged the lake and dammed it to form another shallow one that threw sand onto the shore. The valley drained 12,000 years ago leaving rich soil suited to farming. It also left the kettle holes that dot the landscape around Hartford.

A small kettle hole in Branford helped give birth to American limnology, the science of lakes. G. Evelyn Hutchinson, Yale zoology professor, used Linsley Pond in Branford to teach students about ecology, according to Thorson..

The glacier also deepened an old river channel along shat is now the Connecticut shoreline. Then the sea level rose to create deep water harbors from Greenwich to Stonington. Marshes and kettle holes behind the beaches then developed as the sea level slowly rose. One such kettle hole, Anderson Pond in North Stonington, encompasses 57 acres ideal for boating, canoeing or kayaking.

Development threatens the health of Connecticut’s kettle holes, which are highly sensitive to climate change and water pollution. When Thorson wrote his book in 2009, home buyers increasingly looked to freshwater shorelines. They had concerns about rising sea level, increasing hurricane strength and the high cost of flood insurance. Kettle hole junkies in Maine can find a series of kettle holes just outside of Portland. The Portland Water District opened the Sebago Lake Land Reserve in 2005 for recreation and admiring kettle holes. They include Half Moon Pond, Otter Ponds and Snake Pond.

Visitors can also see a kame slope left by the Laurentide glacier when it retreated.  It also created a ridge of sediment known as the Presumpscot Formation.  When the ice sheet melted into streams, the water carried sediment like silt and clay to the ocean. The silt left behind — the Presumpscot Formation — runs from the Maine and New Hampshire coasts inland. Mainers call the sediment “blue clay” and used it for brickmaking in colonial times.

Cape Cod has more than a thousand ponds and lakes and almost 500 of them are kettles – “enough to drown every gossip in,” people used to say.

The Laurentide ice sheet began to head south about 25,000 years ago, reaching Cape Cod and the Islands. When it retreated, it carved out a sand and rock formation called a moraine. 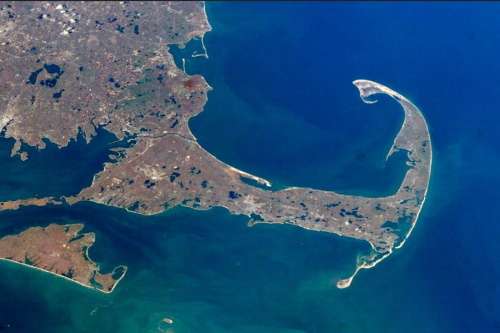 Enough to drown every gossip in

Scargo Lake in Dennis is one of the biggest kettles on Cape Cod. It covers 60 acres with an average depth of 25 feet and 1.3 miles of shoreline. It’s been been stocked with game fish since before 1911, when the commonwealth’s Division of Fish and Wildlife first surveyed it. People can swim from Princess Beach, the primary swimming beach.

Many myths and legends have sprung up about Scargo Lake and yes, they involve a Native American princess.

According to one version, Princess Scargo of the Nobscusset tribe fell in love with a handsome young native on his way into battle. He gave her four fish as a token of his love in a wooden bowl. Or maybe he gave her three fish in a hollowed-out pumpkin.

She put the fish in a tiny pond and awaited his return. Only one of the fish lived during a long, dry summer. Her father called together all the women and children to dig a pond “as wide as an arrow’s flight.” The dirt and rocks they dug up formed Scargo Hill, on top of which Princess Scargo could watch her fish and await her true love’s return.

And that’s why Scargo Lake is shaped like a fish.

A Much Photographed Kettle Hole Lake Chocorua ready for a picture

The surface of Lake Chocorua on most days exhibits a stunning reflection of Mount Chocorua in the White Mountains. That makes it one of the most famous kettle holes in the Northeast and a popular subject for photographers.

Located in Tamworth, N.H., Lake Chocorua owes its pristine water to the lack of development around it. For five decades, the Chocorua Lake Conservancy has worked to protect the watershed with conservation covenants and easements. Forests now buffer the lake, and motorboats are forbidden by law.

New Hampshire boasts two other well-known kettle holes in the world of limnology: Pea Porridge Pond in Conway and Madison and the much-studied Mirror Lake in the Hubbard Brook Experimental Forest. 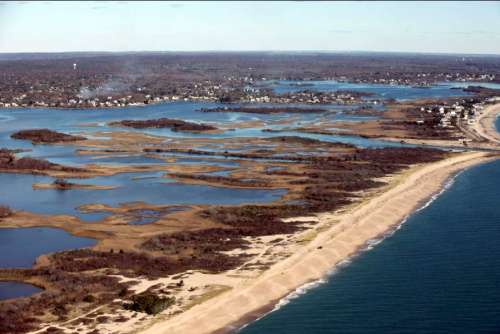 In Rhode Island,  moraines on Block Island and near Charlestown are about as old as Cape Cod — and as full of kettle holes.

The Ninigret National Wildlife Refuge has plenty of them. Once used for farming, it got turned into a military base during World War II, the Naval Auxiliary Air Station Charlestown. Then the U.S. Fish and Wildlife Service designated it a refuge in 1970.

Today shrubs and grassy reclaim the old runways, used as part of the trail network that goes past salt marshes, kettle holes and forests. Birdwatchers love it, as they’ve recorded 310 species of birds within the refuge. 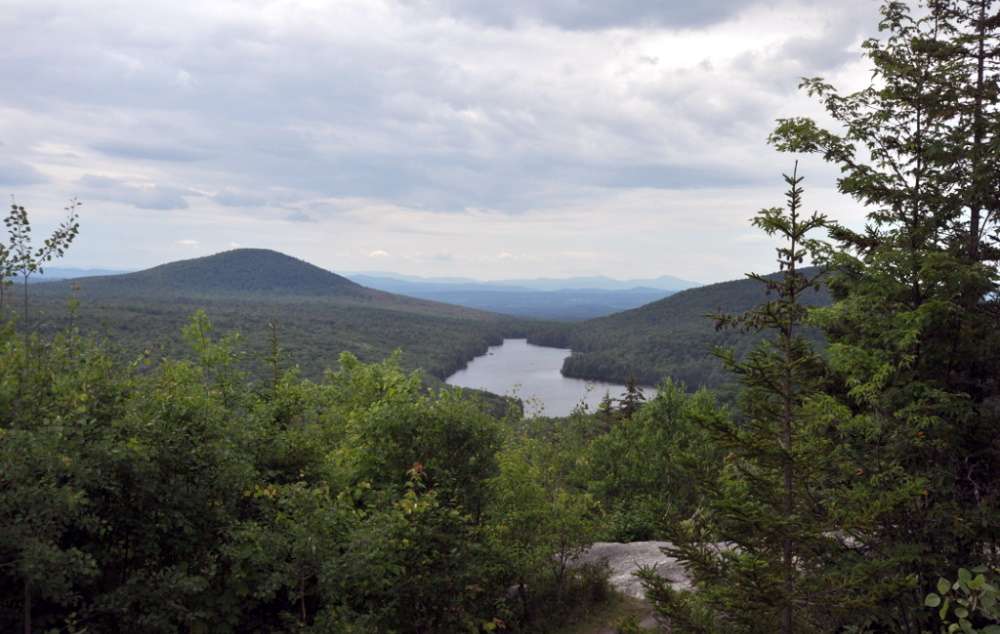 Kettle Pond, one of many kettle holes in Groton State Forest.

When the Laurentide glacier retreated north, it scraped out yet another moraine in northeastern Vermont. Melting icebergs then  filled Vermont’s kettle holes and kettle bogs.

Kettle Pond State Park near Marshfield belongs to seven state parks in Groton Forest. The Civilian Conservation Corps created many of the trails and shelters among the trees.

A hiking trail circumnavigates the pristine waters of Kettle Pond, which, as its name suggests, is a kettle hole. The hiking trail offers a swimming beach, primitive shelters and the call of the loon. Climb nearby Owl’s Head for a spectacular view of the pond.

With thanks to Beyond Walden: The Hidden History of America’s Kettle Lakes and Ponds by Robert Thorson.