The Tariffville disaster, a train wreck near Hartford, prompted the first-ever emergency telephone call when a doctor summoned help from a local drugstore.

The disaster also made big news, providing sensational photographs of the twisted wreck and thrilling stories of heroic rescuers. It killed more than a dozen passengers and made the telephone famous. And it contributed to the bankruptcy of the Connecticut Western Railroad two years later. A passenger coach hangs off the bridge the next morning.

Shortly before 10 pm on the cold night of Jan. 15, 1878, a train carrying eight cars of sleepy passengers and two locomotives left Union Station in Hartford. Many of the passengers had attended a religious revival held by famed evangelist Dwight L. Moody in Hartford. They were returning to their homes in Bloomfield, Simsbury and towns in New York state.

When the train made its first stop, some young men hopped on between the cars and hung on for a free ride.

A half-mile past the Tariffville station in Simsbury, the first locomotive passed over the wooden bridge that spanned the Farmington River. Then as the train approached the western abutment, the span collapsed, sending the two engines, the baggage car and three passenger coaches 10 feet into the river.

The train’s superintendent rushed back to the Tariffville station and telegraphed the main office for help. Some of the freeloaders had been crushed to death under the train’s weight. Injured passengers cried for help from the icy river. Tariffville residents and survivors tried to crawl out on the broken ice and save them before they drowned. The Tariffville disaster from the Simsbury side of the river. Detail of a stereograph by Daniel S. Camp of Hartford.

A doctor named D.P. Pelletier learned of the accident, probably by telegram from the railroad’s main office. He knew that a nearby druggist on Capitol Avenue had installed Alexander Graham Bell’s speaking telephone. He rushed over and used the store’s telephone to call other doctors for emergency aid. They organized a special relief train that carried physicians and other first responders to the scene. The train that rushed to the Tariffville disaster was called the Samaritan Special.

The doctors ministered to the injured passengers while the Tariffville residents brought the survivors into their homes. Reporters and photographers hurried to the scene of the wreck. In the end, 13 passengers died and 70 were injured. Many more might have died had it not been for Dr. Bell’s new device.

The Tariffville disaster made page one news, and so did that emergency telephone call. 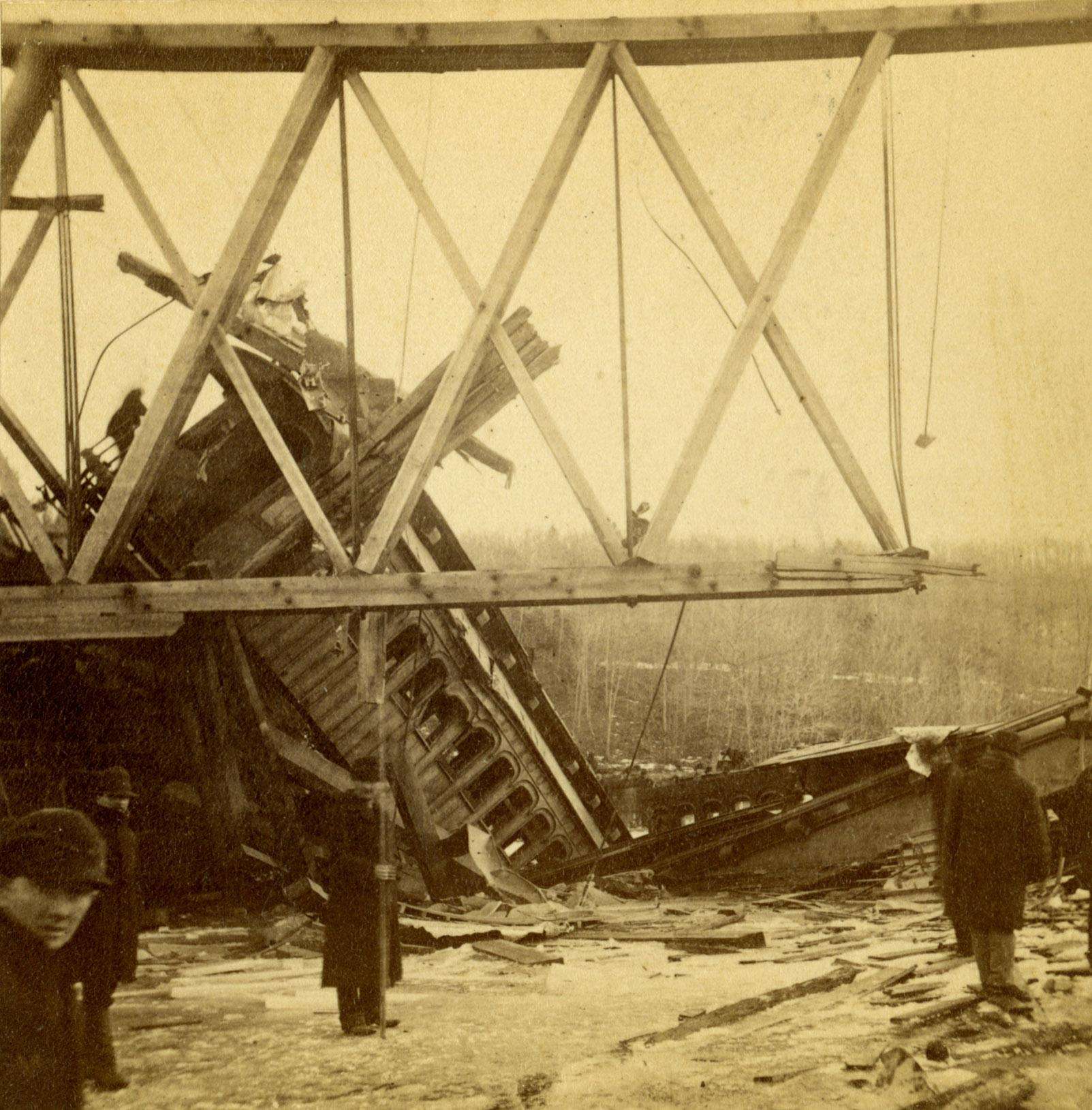 Wooden timbers and iron rods broken in the wreck. Detail of stereograph by Daniel S. Camp of Hartford.

Alexander Bell’s speaking telephone had proved its usefulness, wrote Bruce Sterling in The hacker crackdown: Law and disorder on the electronic frontier

“After Tarriffville, the telephone network spread like crabgrass,” he wrote. “By 1890 it was all over New England.”

At the time of the crash, the Connecticut Western Line, which linked Hartford with the Hudson River Valley, teetered near bankruptcy. An inquest was held, in which railroad executives blamed the bridge for the Tariffville disaster. Bridge experts blamed the railroad. A jury reached a split decision.

And on the day after the Tariffville disaster, Moody told 2,000 attendees at another Hartford revival meeting about the “shortness of life, the unexpectedness of death, and the importance of being always ready.” 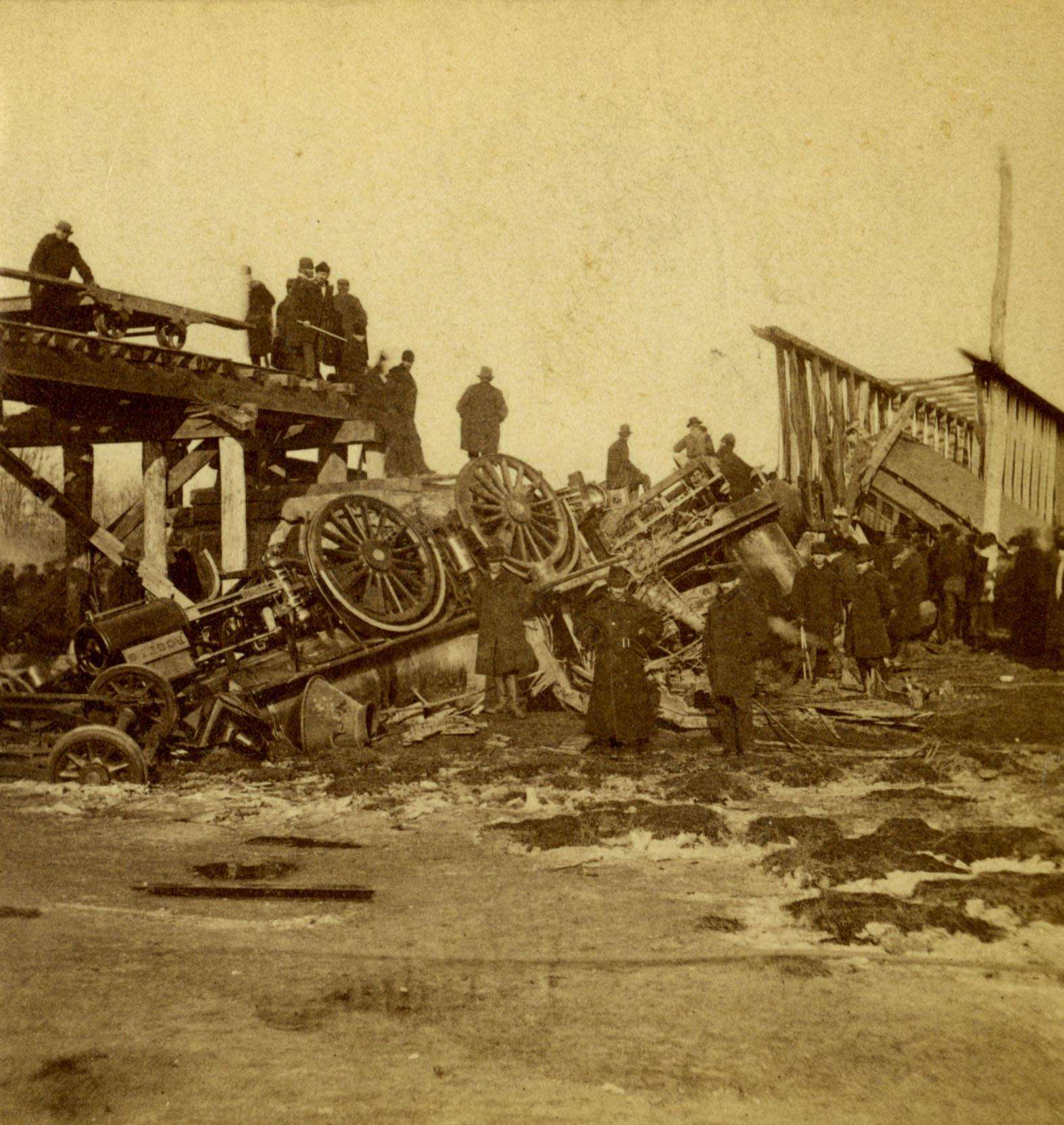 A locomotive on the riverbank on the day after the Tariffville disaster. Detail of stereograph by Daniel S. Camp of Hartford.