Fletcher, Vermont: The Town That Escaped the 1918 Pandemic (This One, Too)

The 1918-20 influenza pandemic reached deep into every neighborhood in every town and city in the United States – well, almost. It turns out that seven communities pretty much escaped the deadly virus. Fletcher, Vt., was one of them.

What makes the case of Fletcher so puzzling is that the tiny Northern Vermont town didn’t do anything special to prevent the flu from spreading. And what could have easily turned into super-spreader events just didn’t. Researchers who studied the spread of the 1918-20 pandemic couldn’t figure out why, of the seven so-called “escape communities,” Fletcher pretty much dodged the flu. The others had taken drastic measures, such as barricading highways, quarantining all visitors and requiring masks. Fletcher, not so much.

But there must be something about Fletcher, which bills itself as “a nugget of beauty in Northern Vermont.” Because Fletcher has had the fewest cases of COVID-19 in Vermont, according to the state’s Department of Health.

Estimates of the number of people killed by the 1918 flu pandemic range from 15 million to 100 million. In comparison, the COVID-19 pandemic killed 5.8 million people by Feb. 11, 2022, according to the World Health Organization.

The disease, known then as the Spanish flu, struck young adults hardest. By some estimates, it killed as many as 10 percent of all young adults in the world.

More people died from the 1918 flu epidemic in a year than from the Black Death in a century. It killed more people in 24 weeks than AIDS killed in 24 years. It was probably the deadliest disease in history. 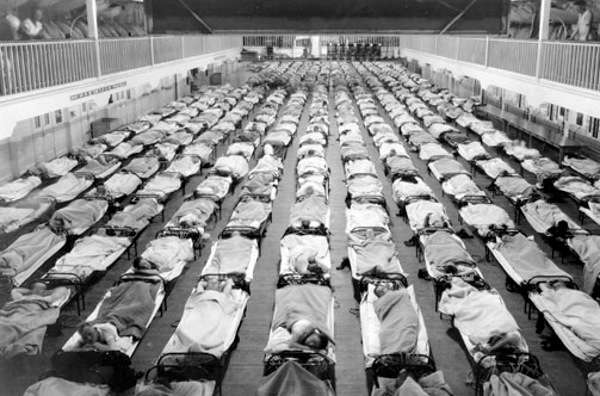 Victims of the 1918 flu epidemic

The flu came in four waves.

From February until May of 1918, the Spanish flu first popped up in several places, including Kansas, California, Michigan and New York. It didn’t kill an unusual number of people, though, and health officials treated it like any other flu. Then it mutated into a virulent killer of young adults at the worst possible time — just as the United States mobilized for World War I. Millions of troops traveled by rail and ship across long distances and then lived in close quarters.

The mutated virus showed up in mid-August in Brest, France and Freetown, Sierra Leone. Then two soldiers reported sick on Commonwealth Pier in Boston on August 27. The flu rapidly spread to Camp Devens in Ayer, Mass., just 35 miles away. Devens became an epicenter of the second wave.

By September, 14,000 people at Devens caught the flu and 757 died. Bodies stacked up like cordwood in the morgue.

One doctor described how quickly the flu killed:

[W]hen brought to the hospital they very rapidly develop the most viscous type of pneumonia that has ever been seen. Two hours after admission they have the mahogany spots over the cheek bones, and a few hours later you can begin to see the cyanosis extending from their ears and spreading all over the face, until it is hard to distinguish the coloured men from the white. It is only a matter of a few hours then until death comes, and it is simply a struggle for air until they suffocate… Tending a patient at Fort Devens.

People who had visited sick friends or relatives at Camp Devens brought the disease to Vermont. The flu arrived on the train and got off at railroad stations in St. Johnsbury, St. Albans, White River Junction and Rutland. Some towns, like Stowe, Rutland and Shelburne, banned public gatherings, including school and church services.

The number of severely ill flu patients overwhelmed hospitals in Massachusetts and Vermont. By mid-September, Massachusetts Gov. Calvin Coolidge, a Vermont native, asked Vermont Gov. Horace Graham for doctors and nurses. Graham turned him down – Vermont had enough problems of its own.

Then on Oct. 4, 1918, Graham banned all public gatherings in the state. The closure order lasted until November 3. The third and fourth waves, scattered and less severe: the third wave spiked again from January to April 1919, and then a fourth and final wave in December 1919 to January 1920.

In 1918, the flu hit 13 percent of the population and was responsible for a quarter of all Vermont deaths that year.

But it didn’t kill anyone in Fletcher.

In 2005, the U.S. Defense Threat Reduction Agency went to the University of Michigan with a request. Would the university’s Center for the Study of the History of Medicine (CSHM) conduct a research project on communities that escaped the deadly 1918-20 flu epidemic?

The CSHM identified seven, including a military base, two colleges, a tuberculosis sanitarium and a home for the blind. And two isolated towns – Gunnison, Colo., and Fletcher, Vt.

Gunnison, like Fletcher, was a small, rural mountain town in Colorado, but along a major rail line. The town closed itself off from the outside world, barricading roads, restricting rail travel, closing schools and banning public gatherings. No one caught the flu in the town. Yerba Buena Island, the San Francisco Naval Training Station, sequestered its 6,000 inhabitants on the island. Anyone coming to the island had to wear masks, get their throats sprayed with argyrol solution and quarantine for several days. After the island reopened on Nov. 21, 1918, 25 cases of the flu were reported and five died.

Fletcher didn’t do any of those things.

In 1918, Fletcher was a farming town in northern Vermont with 737 residents, located 35 miles from Burlington.

As influenza spread across Northern Vermont in mid-September, Fletcher residents attended a Red Cross dance in town. Several days later, many went to the Champlain Valley Fair in Essex Junction, 20 miles away. Then on September 18, a soldier arrived to get married in Fletcher — from Camp Devens. At the reception, 120 people showed up.

By September 27, flu patients overcrowded the hospital in St. Albans and the town closed its schools. But Fletcher, 16 miles away, didn’t report its first case until October 13. There would only be one more that year, and both survived.

Then during the next wave of flu in 1919, two more came down with the flu and school closed – but no one died from the disease.

Why? It remains a mystery. The federal government investigated the seven municipalities — and concluded the town may have been lucky.

“The tiny village of Fletcher, Vermont proved to be the most provisional of the provisional escape communities we studied,” CSHM researchers wrote. “Fletcher’s experience during the 1918–1920 influenza epidemic may simply have been shaped by good fortune, remote location, and viral normalization patterns.”

The mystery continues to this day.

In 2020, Fletcher had a population of 1,346, certainly a small town. Vermont, however, has many smaller towns. And none have had fewer COVID-19 cases than Fletcher. A crossroad in Fletcher today.

In 2020, reporters Erin Petenko and Mike Dougherty from the VTDigger went to Fletcher. They asked local residents why they thought the town escaped the flu back in the day.

“It’s very simple out here,” she said. “We kind of live in our own little world.”