Today in Britain people utter ‘Gordon Bennett’ when someone says something unbelievable, disgusting, surprising or outrageous.

They probably don’t know they’re referring to the man who gave Newport one of its most iconic buildings, the Casino.

He did it as a result of a bet. He also liked to drive carriages wearing nothing but a white silk top hat, and he nearly killed Winston Churchill’s mother doing it.

His exploits earned a headline in the UK Daily Mail as recently as 2016. “Meet the rogue whose exploits were so outrageous we STILL cry out his name when we are shocked,” it ran.

He was born James Gordon Bennett, Jr., on May 10, 1841, the son of a Scottish immigrant who founded the New York Herald. Bennett Senior changed the newspaper industry with such innovations as the presidential interview, woodcut illustrations and cash-in-advance for advertisers. He acquired great wealth, which he passed down to his son.

When Gordon Bennett, Jr., turned 16, his father gave him a 70-foot yacht. He turned into an avid yachtsman, winning the first transatlantic yacht race in 1866. Though his detractors said he just stood on the deck drinking booze while his crew did all the work. 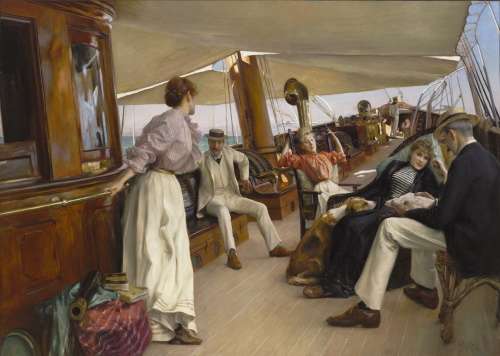 Bennett’s friend Julius LeBlanc Steward was a guest on Gordon Bennett’s yacht Namouna. He painted Bennett, in white suit, and guests on the yacht.

Among his peccadillos were an inordinate fascination with owls and Pekingese dogs. He collected both, and penned editorials extolling owl conservation. When he built a new Herald building, he had his architect include 26 owl sculptures along the roof.

He depended on his Pekingese dogs to vet job applicants. If his dogs liked a candidate, he got the job. One candidate hid veal in his clothes to win a spot on the newspaper.

James Gordon Bennett spent recklessly on mansions in Newport, R.I., New York, the English countryside and Paris. Once he met with a reporter in a hotel bar, and the thick wad of banknotes in his back pocket made sitting uncomfortable. So he threw it in the fire. 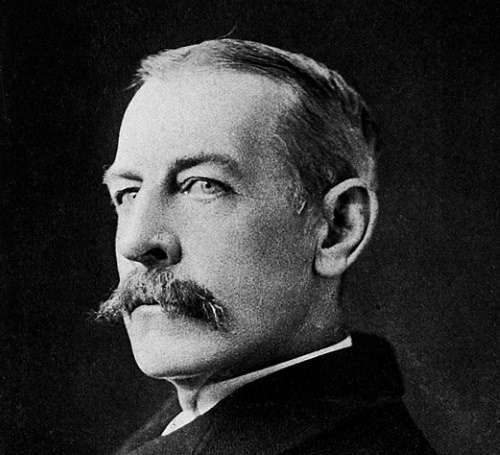 With his father’s blessing, he started the Evening Telegram, a gossipy tabloid that became the New York World Telegram.

At 26, his father turned over the Herald to him. He ran it ably, raising the newspaper’s profile by sponsoring explorers. It was the Herald that sent explorer Henry Morton Stanley to find the missing missionary, David Livingstone. After Stanley immortalized himself by saying, “Dr. Livingstone, I presume,” Gordon Bennett cabled him to stop talking. He wanted the press attention for himself.

Less successful was his sponsorship of the USS Jeanette expedition to the North Pole, which resulted in the deaths of 20 people from starvation. The tragedy increased the newspaper’s circulation, though.

Like many Gilded Age millionaires, he pursued sports avidly. Gordon Bennett is credited with organizing the first polo match in the United States. He also served as the youngest commodore of the New York Yacht Club.

He especially liked to drive carriages four-in-hand, though without his clothes on. One night he was driving his coach at breakneck speed with his friend Leonard Jerome and his young daughter Jennie. The coach rounded a sharp bend and he lost control. Jennie survived the accident, grew up and gave birth to Winston Churchill. Gordon Bennett with his Pekingese

In 1877, at 36, he got engaged to Caroline May, a wealthy socialite, but she called it off. He had shown up at her house party drunk – probably on razzle dazzles, a potent concoction of brandy and absinthe. Before all the guests, he urinated into either the fireplace or the grand piano.

Her brother Fred then followed him into the street the next day and whipped him. Then he challenged Gordon Bennett to a duel, which they fought. But both missed.

Humiliated, Gordon Bennett moved to Paris, where he ran the Paris Herald. It eventually morphed into the International Herald Tribune.

The incident with Caroline May put him off marriage until he was 73. Or maybe he had another reason. He founded the Newport Casino, according to legend, because he bet his friend Augustus “Sugar” Candy that he wouldn’t ride his horse into Newport Rhode Island’s exclusive Reading Room. Candy took the bet and the horse thumped its way into the library.

Banned from the Reading Room, Gordon bought an estate across the street from a vacant lot in Newport. He then hired Stanford White to design his own personal club.

White combined elements of the Shingle Style and the Japanese Pavilion at the 1876 Centennial Exposition in Philadelphia. The Casino featured the new sports of tennis and polo. It ended up being the site of the first U.S. Open, and now houses the International Tennis Hall of Fame.

Gordon Bennett married Maud Potter, widow of the son of the founder of the Reuters news agency. The marriage lasted five years, until his death on May 14, 1918.

Painting: On the Yacht “Namouna”, Venice, by Julius LeBlanc Stewart. This story was updated in 2022.