The continuing scientific evaluation of the Wheeler-Thoreau Shanty site has revealed some exciting new discoveries.

Charles Stearns Wheeler built the shanty in 1836 near Flint’s Pond in Lincoln, Mass.  His close friend and Harvard roommate, Henry David Thoreau, spent six weeks at the shanty during the summer of 1837. His experience living there gave  Thoreau the idea to build his Walden cabin.  Amateur archaeologist Jeff Craig solved the mystery of the shanty’s location by discovering the site in 2018 after spending more than five years working on the project. Discoveries at the Wheeler-Thoreau Shanty Another of the discoveries at the Wheeler-Thoreau shanty site: Foundation stone.

The second foundation stone was clearly chiseled into the surface rock, holding a portion of the shanty structure in place.  These two stones belonged to the shanty’s “dry stone” foundation, a foundation built without mortar.  There were no bricks used in Wheeler’s foundation. Much of the stone foundation remains intact underground.  Both of these stones were discovered  at the surface level, after removing significant amounts of dirt that had kept them hidden from view (Note: the foundation stone pictured below is about 15 inches in length). 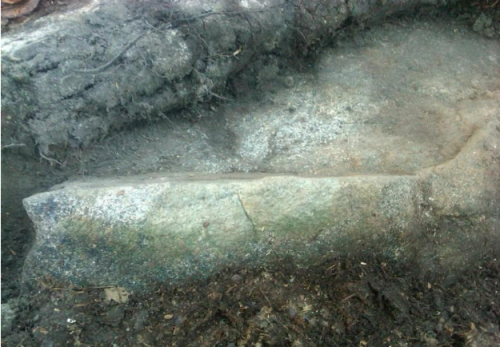 Another foundation stone discovered at the site

Layout of the Shanty

Wheeler built the shanty in 1836, perhaps with Thoreau’s help.  We know from a letter written by Robert E.C. Stearns (Wheeler’s cousin) that Wheeler had significant help with the construction of the shanty, probably from other family members.

As shown in the following diagram, the shanty measured 22 feet x 22 feet (larger than Thoreau’s cabin at Walden, which    measured 10 feet by 15 feet). A post hole was dug at each of the four corners, and the remains of the four post holes are still there today.

The shanty did not have a chimney because Wheeler and his college friends used it primarily during their summer vacations from Harvard. The shanty also had an in-ground cistern, which collected rainwater from the roof.  The cistern was carefully constructed to filter the water continuously, providing safe drinking water at the site. Although Wheeler built the shanty with a dry stone foundation, he used lime mortar in other parts of the structure. Numerous artifacts have been found at the shanty site containing lime mortar.  The photo below shows some examples. Lime Mortar used in the construction of the shanty

The mortar was primarily used as a filler to plug the gaps between the wooden logs used to build the shanty. The walls of the shanty would have been porous without mortar, allowing the wind and rain inside. Lime mortar was used extensively in the 18th and 19th centuries as a key building material for houses and other buildings.  In the late 19th century, portland cement and concrete largely replaced lime mortar as the preferred building materials.

An unexpected surprise was the discovery of an in-ground cistern at the site.  Located adjacent to the southeast corner of the shanty, Wheeler used it to provide drinking water for him and his guests. Metal fragments found in the cistern,  utilized as part of the filtering system to keep the rainwater fresh.

Some of these fragments were identified as silver. People understood in the 18th and 19th centuries that silver helped keep water clean.  Several metal fragments had multiple layers, built with copper, silver and gold.  The layers of metal were fused together, with copper and silver making up the inner and middle layers, and gold making up the outermost layer. By using copper as the base layer, the artifacts had more strength. It also saved the expense of using silver and gold exclusively.  Using gold as the outer layer also protected against tarnish, whereas silver and copper will tarnish over time.

The gold and silver were definitely used to help treat the water. Exactly how these objects functioned in the cistern is still a mystery at this point.  The research continues into this question and also how the cistern’s complex design worked. Gold and Silver artifacts recovered from the cistern

The goal of conducting a formal excavation at the site remains a priority.  An initial attempt to organize an excavation with an archaeological team fell through because of  disagreement over risk management issues. The excavation goal is complicated by the fact that the site is on conservation land.

Formal approval of an excavation on conservation land introduces another layer of red tape that must be resolved if an excavation plan is to be approved.  This question and other challenges remain before considering opening the historic site to the public.  Fortunately, much about Wheeler’s shanty has already been revealed, thanks to Jeff Craig’s discovery of the lost site.

It will take time, but the site should give up more of its secrets as research continues.

For more information about discoveries at the Wheeler-Thoreau shanty site, click on this web address: