When Connecticut Went in for Comic Book Burning

On Feb. 26, 1955, a small group led by Mrs. Charles B. Gilbert of Norwich, Conn., posed for a photographer in front of a pickup truck filled with comic books. Two cute kids tossed more books into the back of the truck. The caption said the smiling Mrs. Gilbert planned a dramatic comic book burning in her hometown.

The photo made it into the New York press, where it stoked outrage among civil libertarians. The American Civil Liberties Union and the American Book Publishing Council objected.

But to no avail.

After World War II, baby boomers devoured billions of comic books that told thrilling tales of superheroes, crime fighters and hideous supernatural creatures. The cheap, colorful publications posed as much of a threat as dope dealers and Communists–at least in the minds of educational, religious and political authorities. And so just a few short years after the defeat of the Germans, who notoriously burned books they disliked, Americans began putting matches to Batman and Johnny Thunder.

The gentle comic strips of the 1920s — Winnie Winkle, Moon Mullins and Gasoline Alley — were joined in the 1930s by super heroes, crime fighters, ghouls and war heroes.

In 1938, Superman made his debut in Action Comics, ushering in what some called the Golden Age of Comic Books. Others called it the Ten-Cent Plague.

Nearly all comic book publishers had headquarters in Manhattan, but two located in Connecticut. Plastic Man was a big hit for Quality Comics

A high-living entrepreneur named Busy Arnold moved his Quality Comics publishing company from Manhattan to Stamford, Conn., in 1940. Arnold lived in Greenwich and stashed his girlfriends at 10 Park Ave. in Manhattan. Arnold had hits with Plastic Man and Spirit, a crime fighter who wore a suit and fedora and possessed supernatural powers. Chester Gould’s Dick Tracy preceded Superman by seven years, but the police detective also played a role in the evolution of comic books. Stories about bringing violent criminals to justice inspired a wave of crime comics such as Web of Evil, Justice Traps the Guilty, Shock SuspenStories and Murder, Morphine and Me.

Titles like Tales From the Crypt added to the gore and introduced villainous characters like man-eating lizards and killer puppets. A U.S. Senate subcommittee would later single out EC Comics for its  gruesome illustrations of horror and crime stories. What delighted juvenile readers horrified adults—especially educators, clerics and Sterling North. North, an author and literary editor for the Chicago Daily news, wrote a column titled “A National Disgrace.” In the column, appearing on May 8, 1940, he scathingly denounced comic books.

North called them ‘sadistic drivel’ and ‘a poisonous mushroom growth of the last two years.’ He charged their publishers with guilt for “a cultural slaughter of the innocents.”

The column was read widely and reprinted so many times the newspaper’s printer couldn’t keep up with orders. 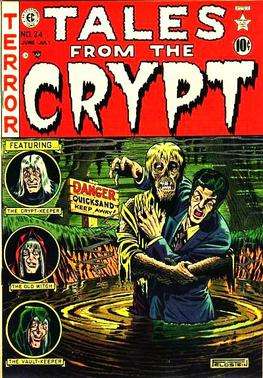 “On practically every page of every one of them can be found such themes as mayhem, playing up a voluptuous scantily clad siren, shady victories, weird and impossible settings, bribery, machine gunning, kidnapping,” he wrote. Brantley called comic books a plague that takes millions of dollars from children’s pockets. And he predicted they would leave behind ‘horrible desolation, grief and putrefaction.’ Religious and educational authorities along with anti-communists like J. Edgar Hoover joined in the fray. They denounced comics as ruining students’ scholastic performance and turning them into juvenile delinquents.

Even children’s book author Robert McCloskey piled on in 1943 when he had his Homer Price character turn his back on lurid comic books in the corner drugstore. That same year, children, egged on by their parents, teachers and priests, began comic book burning. They started in Spencer, W. Va., with a 25-foot-high bonfire covered by the Associated Press. That inspired students in St. Patrick’s parochial school In Binghamton, N.Y., to collect 2,000 objectionable comic books in a house-to-house canvass. They then burned them in the school yard. Another comic book burning followed in Rumson, N.J., in Cape Girardeau, Mo., in Chicago and Vancouver, Canada.

At least 50 cities and towns banned comic books outright. In Boston, the Watch and Ward Society and the Holy Name Society quietly removed hundreds of titles from booksellers’ shelves. New Britain’s city council instructed the police to ‘prohibit the display and sales of magazines and comic books pertinent to crime or sex and all other publications of an obscene nature.’ Hartford’s city council passed a “Clean Up the Newsstands” resolution urging magazine vendors to stop selling comics with themes of immorality and crime.

Then in 1954, Wertham published a book called Seduction of the Innocent. He argued that comic books caused juvenile delinquency because children mimicked the villains in them. Cover of a Batman comic

Wertham also trashed romance comics for their ‘false sentiments,’ ‘cheapness’ and ‘titillation.’ He accused comic book makers of including hidden sexual themes, such as a gay Batman and Robin. Wertham even saw lewd pictures of naked people concealed in the bark of trees. He didn’t like Phantom Lady because of her sexy outfit, while he called Wonder Woman a lesbian.  Superman, he said, was an un-American fascist.

On April 21-22 and June 4, 1954, the U.S. Senate Subcommittee on Juvenile Delinquency held televised hearings in New York City. The subject: comic books. The panel introduced Seduction of the Innocent as evidence, and called Wertham as a witness. “I think Hitler was a beginner compared to the comic-book industry,” Wertham said. 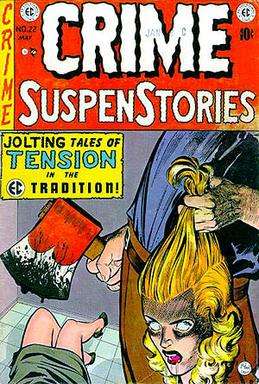 In good taste, for a horror comic

William Gaines, publisher of EC Comics, also appeared as a witness. Gaines had been threatened with criminal proceedings by the Massachusetts attorney general for a satirical comic-book version of The Night Before Christmas.

Senators questioned Gaines about a cover depicting a severed head and a story about a vampire couple who adopt a child to fatten him up so they can drink his blood. (The child, as it happens, was a werewolf who ate his adoptive parents.) Gaines asked the subcommittee, “What are we afraid of? Are we afraid of our own children? Do we forget that they are citizens, too, and entitled to select what to read or do?”

The senators, though, got the upper hand, badgering Gaines to admit that a severed head showed ‘good taste…for a horror comic.’

In the first half of 1955, American Legion Auxiliary chapters around the country launched Operation Book Swap. Children traded in their comic books for a ‘clean’ hardback. The national headquarters of the auxiliary reported the disposal of ‘hundreds of thousands of objectionable comic books.’

“John Chiangi and Lisa Drobnes add their comic book collection in the back of a pickup truck at Norwich, Conn., Feb. 26, 1955. The New York Post got hold of the story and ran a headline, Legion Auxiliary Sets Comic Book Burning. The scheduled bonfires provoked controversy, and Mrs. Charles Gilbert called off the comic book burning.

The auxiliary carted off the comic books to the dump instead. “There are overtones to book burning that aren’t good,” she said.

But the damage had been done. The comic book industry decided to avoid further legal trouble by censoring itself. In 1954, the Comic Books Association of America formed to develop a code of ethics and standards for the industry.

Publishers had to show police officers, judges and other government authorities in a positive light. The code banned werewolves, vampires, ghouls and zombies. And good always had to triumph over evil. Judgment Day. Critics didn’t like images of black astronauts, either.

The head of the Comics Code Authority, Judge Charles Murphy, even demanded that William Gaines’ EC Comics alter an illustration in an anti-racist story, called Judgment Day, because it depicted a black astronaut. Gaines refused and Murphy backed down. Gaines then decided to leave the industry. For Gaines, the opposition to comic books turned into a blessing in disguise. Gaines transformed his MAD publication from a comic book into a magazine, which avoided the Comics Code Authority. At its peak, MAD had 2 million subscribers and a reputation as the bible of its generation.

Others didn’t fare so well. By 1956, Quality Comics shut its doors in Stamford. David Hajdu, in his book The Ten-Cent Plague, listed 896 artists and writers who never again worked in comics after the purge.

With thanks to A Crisis of Innocence, online exhibit by the Ryerson University Library and The Ten-Cent Plague: The Great Comic-Book Scare and How It Changed America by David Hajdu. This story last updated in 2022.