It may be hard to believe, given today’s bumper crop, but at one time in America had a shortage of lawyers. In 1782, Connecticut’s Tapping Reeve decided to do something about it.

He started a law school in his home, and ran it for the next 50 years. The law school’s graduates served at high levels in all branches of state and federal government — including 28 U.S. senators, 101 congressmen and two vice presidents — in every year from 1791 to 1860.

Tapping Reeve saw firsthand how the Revolutionary War disrupted the legal profession in America. Some states outlawed lawyers who had not been trained in America. Even where they were allowed to practice, English-trained lawyers were few in number, especially after hostilities kept Americans at home. And, of course, the war itself claimed some lawyers who had joined up to fight. 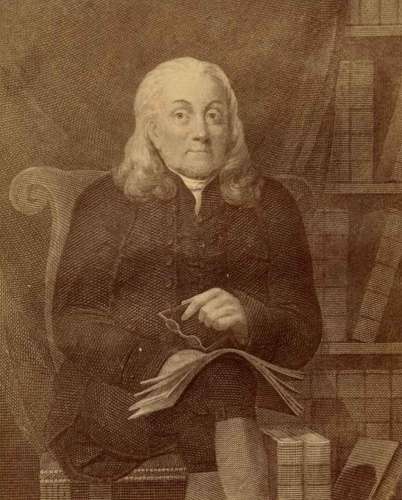 At the same time, the aftermath of the war produced a flurry of legal fights. People battled over what rights and ownership passed through the war and didn’t. All that needed sorting out in the courts.

He was born on Long Island on Oct. 1, 1744, the son of a minister. He earned a bachelor’s degree from the College of New Jersey (now Princeton) in 1763 and a master’s three years later.

While doing his graduate work, Reeve taught at a grammar school in Elizabeth, N.J. There he tutored the son and daughter of Princeton’s president, the Rev. Aaron Burr. He married the daughter, Sarah, 10 years his junior, when she was 17. He then became a close friend of her brother, future vice president and traitor Aaron Burr. Reeve studied law with Judge Jesse Root of Hartford and in 1772 moved with his wife to Litchfield, Conn. There he opened a law practice.

Apprenticeship was the established means of training lawyers in the American colonies. But after the war there were far too many willing apprentices and far too few lawyers for the system to work well.

So Reeve invented the first law school in New England – the Litchfield Law School – in his home. But as the demand grew, Reeve refined his approach to teaching. By 1782, he had developed a formal curriculum. Two years later, with 15 students bursting the seams of his available office space, Reeve built a schoolhouse. It was a simple, unheated building, but the Litchfield Law School would educate more than 1,000 students before it closed.

The teaching methods of the school evolved into a daily routine. Students would take a test on the material covered the previous session. Each day they would receive a lecture, which they were expected to transcribe. Then they spent the rest of the day studying the citations given during the lecture, taking additional notes. Then, students would transcribe what they had learned into a completed summary for reference. Litchfield Law School from a 1906 postcard

When they finished their studies, students would have five volumes of notes that would serve as the basic references for their law practices.

The entire course of study took 14 months – with two four-week vacations. The cost, by the 1820s, was $100 for the first year and $60 for the remainder. After that, students were well-prepared for the bar exam.

Reeve himself never gave up practicing law, and in 1798 he was made a judge in the Superior Court. Reeve reached out to former student, John Gould, to join in the school. The two men ran it together until Reeve retired in 1820. Gould would carry on until 1833, by which time larger universities had established growing law schools that appealed more to young students. The Litchfield Historical Society acquired the law school building in 1911 and later moved it to the Tapping Reeve house property. A dedication ceremony was held in 1929.

The final list of lawyers trained by Reeve and Gould was impressive. Students from every state in the union attended the school, and its list of alumni contains governors, senators, congressmen, chief justices and judges, ambassadors and two vice presidents. Among the more prominent names: Education reformer Horace Mann and Vice President John C. Calhoun.

The school also inspired several of its students to launch schools of their own throughout the country, based on the Litchfield Law School model.

William Hull Tries To Save Nathan Hale, Then Himself - New England Historical Society October 4, 2019 - 8:58 am

[…] they parted ways, both to teach school for a year. Hull studied law in Litchfield, Conn., with Tapping Reeve. His legal career was cut short when the American Revolution broke out and he was elected captain […]