Home Massachusetts The Shot Heard Round the World: Concord vs. Lexington vs. … Menotomy? The Shot Heard Round the World: Concord vs. Lexington vs. … Menotomy?

There was a shot, and it was heard around the world, but who fired it and where?  Debate over the shot heard round the world caused more than one skirmish over the years – between Concord and Lexington.

And then Menotomy jumped into the fight. 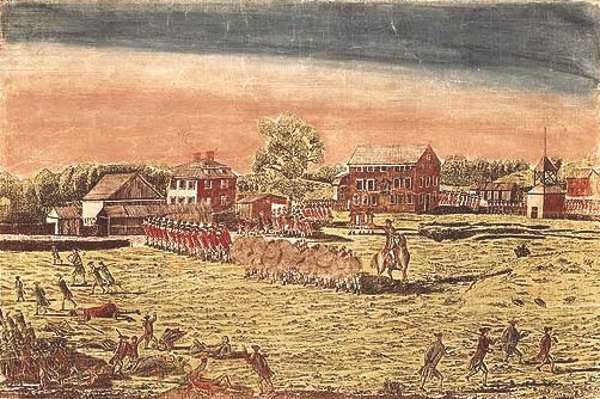 The Battle of Lexington, where the shot heard round the world was fired.

The question, “Where was the shot heard round the world fired?” surfaced in 1824. Then the Marquis de Lafayette visited all 24 states to celebrate the 50th anniversary of independence. When he arrived in Lexington, Mass., people told him he’d reached the ‘birthplace of American liberty.’ But then he went to Concord, where people told him the patriots made the “first forcible resistance” there.

That infuriated Lexington, having been deprived of “the honour of having raised the first standard of an armed opposition to the unjust and tyrannical measures of the mother country.”

So in 1825, the Lexington Town Meeting appointed a committee to publish a statement of facts about the April 19 affair, “as may be supported by undoubted testimony.”

From that testimony, Elias Phinney tried to put the matter to rest. He compiled a book called, History of the Battle of Lexington: On the Morning of the 19th April, 1775 (now a free ebook).

In it, he explained the confusion. Shortly after the battles, British general Thomas Gage claimed the patriots fired the first shot. To refute that claim, witnesses in Lexington said the patriots hadn’t even fired.

But in the opening days of the war, Phinney wrote, no one wanted to admit that Lexington patriots had shot at British regulars. The outcome of the war was then far from certain, and militiamen identified as shooters could wind up on the gallows.

The Shot Heard Round the World

Phinney wrote that at sunrise, 700 British regulars showed up in Lexington and about 80 militiamen came out of Buckman’s tavern. They knew the British regulars were on the march to Concord to seize arms and ammunition.

What really happened was that someone — no one, to this day, knows for sure — discharged a weapon. Some people consider that the shot heard round the world.

The Battle of Lexington, by William Barnes Wollen.

Phinney, however, neglected to mention that anonymous shot. Instead, he set out to prove that the redcoats, under orders, began firing.

“Their commander, Lieut. Col. Smith, advanced a few rods, and exclaimed, “Lay down your arms and disperse, you damned rebels!–Rush on my boys! Fire!” and fired his own pistol.

Well… not quite. Smith hadn’t even arrived. It was probably Maj. John Pitcairn who told the rebels to lay down their arms. But Finney wanted to prove that the patriots did shoot back, only, however, after the British fired a second unprovoked volley. So he listed the testimony of militiamen who said they’d fired their weapons.

Phinney wrote that William Munroe was confident some of the militiamen fired back. He testified that Ebenezer Munroe, wounded in the arm, said to him, “I’ll give them the guts of my gun.”

“We then both took aim at the main body of the British troops,–the smoke preventing our seeing anything but the heads of some of their horses,–and discharged our pieces,” Munroe testified.

“I discharged my gun into the main body of the enemy,” said Ebenezer Munroe.

William Tidd retreated up the north road as an officer on horseback pursued him. He called out, “Damn you, stop, or you are a dead man!” …”Therefore I sprang over a pair of bars, made a stand, and discharged my gun at him.”

Nathan Munroe said he jumped over a wall when the British started firing, ‘and then turned and fired at them.’ Reenactors on the march to Lexington to commemorate the shot heard round the world.

That testimony didn’t persuade Ralph Waldo Emerson. He lived in Concord in a house called the Old Manse, where his father and grandfather had watched the skirmish. In 1836, he added fuel to the debate between Concord and Lexington when he published the Concord Hymn.

By the rude bridge that arched the flood,
Their flag to April’s breeze unfurled,
Here once the embattled farmers stood,
And fired the shot heard round the world.

Emerson, in essence, argued that in Concord at the Old North Bridge the patriots fired the first shots under orders. In Concord the British suffered their first fatalities and made their first retreat. So the first real resistance in the American Revolution happened in Concord, he concluded, along with the rest of the town. The animosity between Concord and Lexington simmered for the next few decades. During the bicentennial of the shot heard round the world, President Ulysses S. Grant considered skipping Massachusetts to evade the issue.

Then in 1894, Lexington petitioned the Massachusetts Legislature to proclaim April 19 as “Lexington Day.” Concord countered with a petition to call it “Concord Day.” Arlington, then called Menotomy, entered the fray, declaring patriots had fought a larger battle there during the British retreat to Boston.

Gov. Frederic T. Greenhalge came up with a compromise to honor the shot heard round the world: Patriots’ Day.

Since 1969, Patriots’ Day falls on the third Monday of the month of April. Maine and Connecticut also celebrate the holiday to commemorate the shot heard round the world.

[…] The Town of Lexington owns and maintains Lexington Battle Green, site of the shot heard round the world. […]

Whether of not The Battle of Alamance (North Carolina) of April, 1771, fits the prevalent New England version of history, This event counting up to 3000 participants must be read as well as the other related North Carolina nativities- including the evasive Mecklenburg Declaration of Independence.