Home boston Was Bundling in Winter Really Safer Than a Sofa in Summer? Was Bundling in Winter Really Safer Than a Sofa in Summer?

City slickers and the upper class considered bundling something that unrefined rustics did. Brahmin Charles Francis Adams, grandson of John Adams, wrote in 1891 that “the practice of ‘bundling’ has long been one of the standing taunts or common-place indictments against New England.”

A courting couple ‘bundled’ or ‘tarried’ by spending the night together in bed only partially clothed. They did it with the full knowledge and consent of the parents, according to Edwin Valentine Mitchell in It’s an Old New England Custom.

The mother and sisters often tucked the couple into bed, but took precautions: they wrapped the girl like a mummy, or tied her legs were together or placed a bundling board between them. They attached sleigh bells to the bed in case she needed to fend off her bundling partner.

The custom was widespread in rural New England, but unknown in the cities.

In 1828 (late in the Bundling Era), a young lady from Portland visited her aunt in rural Maine.  A handsome young farmer invited her to bundle, which caused her considerable shock. She wrote a letter that included his description of the practice:

‘It is the custom in this place, when a man stays with a girl, if it is warm weather, for them to throw themselves on the bed, outside the bed clothes; if the weather is cold, they crawl under the clothes, then if they have anything to say, they say it-when they get tired of talking they go to sleep; this is what we call bundling-now what do you call it in your part of the world?’

The young lady replied to the young farmer that respectable people did no such thing.

The antique winter sport sparked controversy even in its heyday. In the 18th century, the Puritan minister Jonathan Edwards vilified bundling. He noticed an increase in births less than nine months after the wedding, and he denounced bundling as shameful and disgraceful.

But Connecticut minister Samuel Peters in 1781 defended bundling. In his General History of Connecticut, Peters characterized bundling as “certainly innocent, virtuous and prudent, or the Puritans would not have permitted it to prevail among their offspring…’

He noted that Boston, Salem and Newport banned bundling around 1756, finding a sofa a better place for courtship. But, he wrote, bundling had prevailed since 1634 with “ten times more chastity than the sitting on the sofa.”

Peters had three daughters and spoke from 40 years’ experience. He believed the sofa in summer was more dangerous than the bed in winter.

An Honest Man and a Virgin

Peters’ view of bundling was shared by whoever wrote the rhyme,

Let coat and shift be turned adrift,
And breeches take their flight,
An honest man and virgin can
Lie quiet all the night. 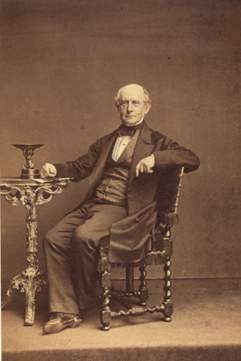 Charles Francis Adams. No bundling for him.

Charles Francis Adams tried to pin down the origin of the old Yankee custom in his paper, Some Phases of Sexual Morality and Church Discipline in Colonial New England.

Adams believed it hadn’t come from England, as had so many New England folk customs. No one had ever reported on it in England, he wrote.

Adams, though, needed to explain why bundling prevailed on Cape Cod. Cape Codders had the purest strain of English blood in their veins until about 1825, purer than in any English county. But the practice held out the longest on the peninsula.

Adams concluded the custom sprang from necessity during a “simple and comparatively primitive period.”

A young man interested in a young woman only had a brief window to court her: from sundown Saturday to sundown Sunday, he wrote. In the sparsely settled community, he might have to walk 12 miles to see his girlfriend. Fuel cost a lot of money.

So if the young lovers wanted to stay up and talk they would have to do it in the cold and dark. They therefore preferred to bundle in a warm bed.

The Vermont Almanac and Register for 1799 carried an oft-told folk tale about the custom:

While the American troops were at Cambridge, 1775, an Indian chief from one of the western tribes, was on his way to visit them. It happened that he was detained a number of days at a gentleman’s house in –. While he was there the gentleman’s daughter received a visit from her suitor. One evening the honest native, thinking to divert himself a little in their company, went upstairs: But when he entered their chamber he stood in amaze, crying out, ‘Ho! bed-No do for me Indian!’ ‘Why (says the spark), we can be good here as well as anywhere.’ ‘Yes! yes! but you can be wicked more better!’

Not unlike the custom of “night running” or night courtship (nattefrieri) among the cotter classes in old rural Norway.

[…] Well-to-do city folk thought the old country custom of bundling gave New England a bad name, but its defenders claimed it was a chaste and prudent practice. Click for more. […]

Bundling was a common practice in southern Germany, the hills of the Black Forest made travel for courtship difficult. The practice also came to Pennsylvania with the early German immigrants. My parents in North Dakota even mentioned the practice and called it ‘bundling’. No Idea how purely English settlers happened on it, perhaps necessity is the mother of invention.