Home Connecticut Washington and Rochambeau Map Out The Revolutionary Route in Wethersfield, Conn. Washington and Rochambeau Map Out The Revolutionary Route in Wethersfield, Conn. At Washington’s side were Gen. Henry Knox and Gen. Louis Lebègue Duportail, a French officer who served as chief of the American engineers since almost the beginning of the American Revolution.

The French general didn’t speak English, so he wrote his ideas and his requests on the left side of a piece of paper. Duportail and Chastellux helped interpret. The Americans discussed Rochambeau’s proposals and then Duportail wrote their responses to them on the right side of the paper.

Rochambeau didn’t like Washington’s plan, but he went along with it. And in the end, he got his way. 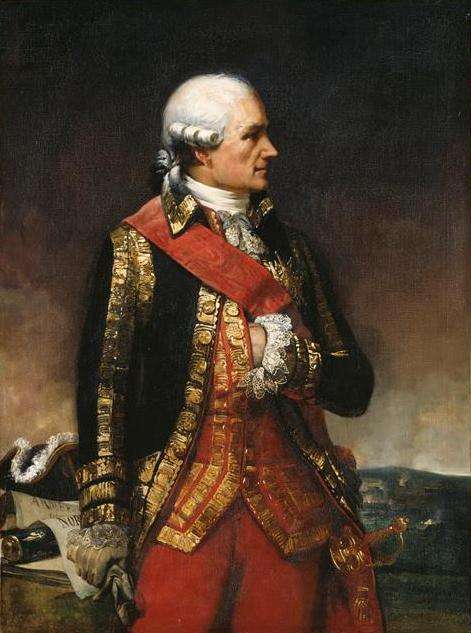 In 1780, Rochambeau was put in charge of the Expédition Particulière, French land forces sent to America to support the Continental Army under Washington. He arrived in Newport, R.I., in July 1780 with seven ships of the line, four frigates and 30-odd transports with nearly 7,000 French regulars.

Then he sat there for the next year.

Rochambeau did meet with Washington in September 1780 in Hartford, about halfway between Newport and Washington’s camp in New Windsor, N.Y. Their talks didn’t get far as the threat of a British attack broke up the meeting.

During that meeting, Rochambeau was disappointed Washington hadn’t invited him to ride over the Hudson River and review his troops. Washington may have intentionally kept the shabby Continental Army out of Rochambeau’s sight.

When the French finally did meet up with Washington’s 6,650 troops the next year, they were surprised to see teenagers, men in their 60s, Indians and African-Americans. They were also shocked by their uniforms.

One German officer in a French regiment wrote,

It was really painful to see these brave men, almost naked with only some trousers and little linen jackets, most of them without stockings, but, would you believe it? Very cheerful and healthy in appearance.

That an American army was still in the field at all in 1781 was due in large part to Washington’s personal charisma and leadership, wrote historian Robert Selig.

Over the long winter of 1780-81, the Continental Army wasn’t in much shape to do anything other than survive. Things got so bad that winter the New Jersey and Pennsylvania regiments mutinied over the lack of food and pay.

In contrast, the French troops were well-equipped and amply provisioned. High-ranking officers had as many as 10 servants and even lowly lieutenants often had two servants and three horses.

And so Rochambeau waited in Newport while Washington kept his army together in New York.

On May 8,1781, a message came from France that lit a fire under the two generals: A French fleet was on its way to the Americas and would be available to help in the summer campaign against the British. The fleet included 26 ships of the line, eight frigates and 150 transports.

Suddenly, Washington and Rochambeau had to get together and act quickly.

They had no place to stay in Hartford, as the Connecticut Legislature met in session. So they chose the town of Wethersfield nearby.

Wethersfield, appropriately, was the hometown of Silas Deane, who along with Benjamin Franklin and Arthur Lee had persuaded the French to help the American cause.

According to tradition, the two commanders each brought an entourage of about 30 people. Some of their aides stayed with the villagers, who welcomed them despite the past unpleasantness with the French. But when the state offered paper money to pay for their expenses, the villagers refused it. The deputy quartermaster had to appeal to the General Assembly for hard money to repay them.

The night before the two generals got together to plan the summer campaign, a concert at the Wethersfield Congregational Church was attended by Washington and his staff,  Connecticut Gov. Jonathan Trumbull, Jeremiah Wadsworth, and probably the French guests.

The next day they met, though they didn’t entirely agree. Washington wanted to attack New York, the center of British power, and then head south.

Rochambeau wanted no part of that plan. He thought the British had dug in too much in the city. He also didn’t have enough forces and he doubted whether the deep-drafted French ships could cross the shallow bar at the entrance of New York Harbor.

But Rochambeau could compromise, and he was willing to work with Washington.

They agreed on a tentative plan to attack the British in New York and then head south. But – undoubtedly at Rochambeau’s urging – they left the possibility open of simply marching south and meeting the French fleet in the Chesapeake Bay.

Washington wrote in his diary

22nd. Fixed with Count de Rochambeau upon a plan of Campaign–in Substance as follows. That the French Land force (except 200 Men) should March so soon as the Squadron could Sail for Boston–to the North River & there, in conjunction with the American, to commence an operation against New York (which in the present reduced State of the Garrison it was thought would fall, unless relieved; the doing which wd. enfeeble their Southern operations, and in either case be productive of capital advantages) or to extend our views to the Southward as circumstances and a Naval superiority might render more necessary & eligable.

The aid which would be given to such an operation in this quarter–the tardiness with which the Regiments would be filled for any other–the insurmountable difficulty & expence of Land transportation–the waste of Men in long marches (especially where there is a disinclination to the Service–objections to the climate &ca.) with other reasons too numerous to detail, induced to this opinion.

The French would leave their “heavy Stores & Baggage” in Providence and Newport under guard.

Soon, French forces numbering about 4,250 men marched from Providence through Connecticut to New York. There they met up with about 6,500 men fit for duty in the Continental Army.

They ended up, of course, changing their plans and continuing on to Yorktown – as Rochambeau had wished.

Today a marked 680-mile Washington-Rochambeau Revolutionary Route traces the journey from Rhode Island through Connecticut to New York and ultimately Yorktown. It is designated a National Historic Trail.

The Maine Ship Captain Who Invented the Modern Donut

This is the room, if I remember the excellent tour of Webb-Deane-Stevens Museum in Wethersfield, CT I took . . .

You are correct! It is one of my favorite rooms at the museum. Thanks for sharing.

You are correct! It is one of my favorite rooms at the museum. Thanks for sharing.

This is very interesting. I love the name. The house doesn’t look “simple” by the standards of that era.

[…] outhouses believed to date to the late 18th century. One stands behind the Joseph Webb house, where George Washington stayed in 1781 when he met with the Comte de Rochambeau to map out what became the Yorktown campaign. Visitors to the museum can not only see where George […]

[…] who came to see him included George Washington, Henry Knox, Israel Putnam, Marquis de Lafayette and Count Rochambeau. Both the house and the War Office are still on the mile-long […]

[…] which is also part of the museum, in May of 1781 where it served as his headquarters. It was here he met with French commander the Comte de Rochambeau, who travelled from Newport, R.I., to discuss plans for the siege of Yorktown. The Webb Deane […]

[…] Night returned in 1776 and 1777, but then the French came to aid the Americans in the war. It would have been unseemly to mock the religion of the king who sent the money, men […]

[…] Saint-Domingue the richest colony in the world. One reason France supported the rebel side in the American Revolution. was to protect its Caribbean colony. In 1779, several hundred free Saint-Domingans of African […]

[…] he hosted Gen. George Washington for five nights while he planned the Siege of Yorktown with the Comte de Rochambeau. It passed through several owners after Webb sold it in 1790. Martin Welles bought it around 1820 […]

[…] family lived in a large stone house in Newport near Narragansett Bay. The Marquis de Lafayette and Count Rochambeau visited the opulent Robinson home during the American […]

[…] The townspeople named Calais for the French city in 1809 to honor France’s help to the American colonies during the Revolutionary War. […]

[…] got the story from an aide to Comte de Rochambeau, Marquis de Chastellux, who had traveled in America in […]

[…] a who’s who of the Revolutionary elite, including George Washington, Marquis de Lafayette, Comte de Rochambeau, John Sullivan and Nathanael […]

[…] also part of the museum, in May of 1781. The house then served as his headquarters. It was here he met with French commander the Comte de Rochambeau, who traveled from Newport, R.I., to discuss plans for the siege of […]

[…] during the Siege of Yorktown, Alexander Hamilton nearly got his friend Knox killed. He was fortunate that Knox was so good […]

[…] Wethersfield settlers were more interested in commercial opportunity than religion. “They were more playful […]