Babe Ruth cast a very large shadow, but on June 23, 1917, Ernie Shore overshadowed the big guy. He even managed to do it after the Babe got kicked out of the game for punching an umpire. It happened at Fenway Park in a game against the Washington Senators. Ruth, the starting pitcher for the Red Sox, got thrown out of the game after one batter. Shore relieved him by getting the next 26 batters out.

Shore was a country boy from North Carolina, born March 24, 1891. He began his baseball career as a right-handed pitcher for the New York Giants in 1912. Then in 1914 he went to play for the Boston Red Sox.

He won three games and lost one in both Red Sox world championships in 1915 and 1916. Shore played for the Red Sox through the 1917 season. He missed the 1918 World Series because he served in the military during World War I.

Then Harry Frazee sold him to the New York Yankees. Frazee also sold Babe Ruth to the Yankees, bringing the Curse of the Bambino onto the team. He ended his career in 1920 with a 65-43 won-loss record and a lifetime earned run average of 2.47. Ruth’s was slightly better at 2.23.

On that June day in 1917, Ruth took the mound for the Red Sox and walked Ray Morgan on four pitches. He believed Ball 2 and Ball 4 were actually strikes. So he charged the umpire, Clarence “Brick” Owens. Ruth yelled, “If you’d go to bed at night, you *expletive*, you could keep your eyes open long enough in the daytime to see when a ball goes over the plate!”

Owens told him to get back on the mound and pitch or he’d throw him out of the game. Ruth replied, “Throw me out and I’ll punch you right in the jaw!” So Owens threw him out. Ruth again charged the umpire and took a swing at him, just managing a glancing blow to Owens’ ear. Owens fell down and threw Ruth out of the game. Police then escorted him off the field.

Ernie Shore then took the mound and Morgan tried to steal second. He was thrown out, and Shore then retired the next 26 batters. )For those of you non-fans, that is a rare feat in baseball.) Not one reached first base. That created a conundrum for scorekeepers. Was it a perfect game, since Shore was on the mound for every out in the game? Or was it a combined no-hitter with Ruth? They eventually ruled it a combined no-hitter. 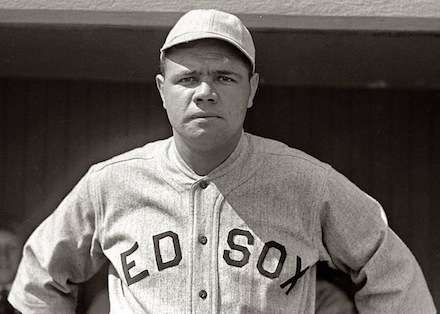 Shore retired from baseball after the 1920 season and for many years served as the sheriff of Forsyth County in North Carolina. He led the effort to build a minor league ballpark in Winston-Salem, N.C., now named after him. He died at the age of 89, the last surviving member of the 1915-16 Red Sox championship teams.

Babe Ruth received a $100 fine and a 10-game suspension. He also apologized publicly, and went on to create more mayhem and make baseball history.

Bathsheba Spooner, Hanged for Murder—Or For Her Loyalist Father?