Chicken family style evolved in Northern Rhode Island during the Great Depression, and even today people will drive for miles and wait in long lines for the cheap, hearty dinner. 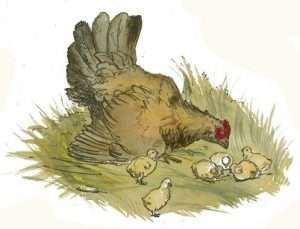 Served in restaurants as an all-you-can-eat meal, chicken family style consists of roasted chicken, salad, pasta, potato and rolls. The poultry is seasoned and slow roasted until the meat falls off the bones. Chicken family style is always served in bowls at the table, never as a buffet.

So popular is chicken-family style that Yankee magazine in 1990 reported it was featured at nine out of 10 weddings and made up half of all orders in Blackstone Valley restaurants. Quahog.org argues it’s unique to nine communities within the Blackstone Valley that have large Italian-American populations. They are Burrillville. Harrisville, Woonsocket, North Smithfield, Lincoln, Central Falls, Cumberland, Glocester, Pawtucket and Smithfield.

The Blackstone Valley can make a strong claim to starting the Industrial Revolution with Sam Slater’s mill in 1790. The mills and factories that sprang up in the region needed cheap labor, and many Italians came per lavorare (to work) during the late 19th and 20th centuries.

Rhode Island today is the most Italian state in the country, with 19 percent of the population claiming Italian descent.

Chicken family style restaurants began in northern Rhode Island in the 1930s, because Italian chicken farmers had more chickens than they could sell. So the farmers and their wives opened small restaurants that sold chicken dinners. The Great Depression ended, but the restaurants didn’t.

In Woonsocket, the Pavoni family used to host bocce games on weekends for friends and family. Mama Pavoni, the story goes, came up with the inexpensive meal of chicken with rosemary and olive oil, later adding pasta, salad and French fries. A Pavoni stepdaughter Mary Ann Delgado Tavernier, and her husband, “Tivvy,” eventually opened a small restaurant in the basement. They served chicken family style for 65 cents and called the restaurant the Bocce Club.

One patron recalled that after World War II, the Bocce Club served meals in the kitchen by reservation only. People knew about it by word of mouth, and it took weeks to get to the top of the waiting list. He called it the real beginning of chicken family style.

The Bocce Club expanded and expanded, offering take-out as well. It set a record one Mother’s Day for serving about 2,100 guests.

Gene Wright supplied chickens for the Bocce Club, and in the early 1950s he began holding outdoor chicken dinners for the Knights of Columbus. He ran them out of his garage on his farm in Harrisville. He did so well that in 1954 he opened a restaurant called Wright’s Farm Restaurant. A Providence Journal reviewer in 1989 wrote that he sat next to a couple who drove 52 miles from Charlestown, Mass., every Sunday to eat at Wright’s. Today, Wright’s has seating for 1,200, but can squeeze in 1,400 for special events.

Other restaurants where you can get chicken family style include the Village Haven in North Smithfield, the Embassy House and the Broaster House in Woonsocket and the Lodge Pub in Lincoln.

With thanks to Edible Rhody and Quahog.org. This story was updated in 2021.

Before there was Wright’s, Ma Glockner’s opened in 1937 in Bellingham. (Closed 2008) Still in the Blackstone Valley but in Massachusetts.

So interesting! I grew up in nearby Milford, MA and always assumed every one ate that way!