New Englanders eat more ice cream than people in any other part of the United States, according to some statistics. The reasons for that ice cream love affair are many. Some say New England simply has better ice cream than other places. Some say it has to do with the region’s long tradition of producing good ice cream — better than, say, in the South. But it may also have to do with the Yankee ingenuity that brought more ice cream to more people. And cows.

New England’s long love affair with ice cream burst into full flower with the soda fountain, where it was served, and the automobile, which ushered in a whole new kind of retail commerce.

The soda fountain owes its American existence to a Yale chemistry professor named Benjamin Silliman. In 1806 he bought from England newly invented equipment that impregnated water with carbon dioxide. He called it soda water. Silliman then began selling it in New Haven, Conn. Sales were brisk, so he invented a bigger machine. He took in three partners and opened soda fountains along the East Coast. The year before Silliman bought his soda equipment, another New Englander began making ice cream possible for people who lived in the tropics. A wealthy Boston Brahmin, Frederic Tudor knew the joys of ice cream and cold drinks in the summer. He began shipping ice around the world. At first people thought him crazy. He proved them wrong by making a fortune.

The automobile also owes much to New England, where the Duryea brothers and Stanley twins pioneered early automobile designs.

Howard Deering Johnson famously started his empire in 1925 as a small soda fountain. He wanted to improve sales, and he hit upon better ice cream as the answers. So with his own hands he began making ice cream with more butterfat and better ingredients. The results were a hit.

Soon he had to wrestle with the challenge of long lines at his Wollaston store. He  began dreaming of an empire. Eventually, Howard Johnson’s grew to a chain of a thousand restaurants – partly on the strength of its 28 flavors of butterfat-rich ice cream.

The Howard Johnson’s restaurant chain has dwindled to one. 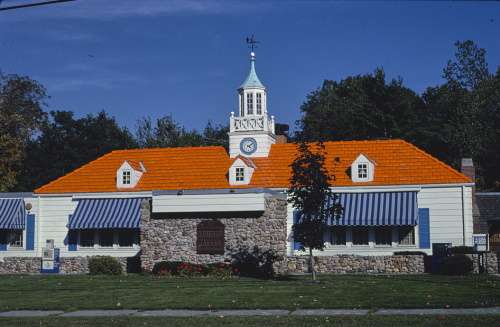 Tom Carvel, a Greek immigrant, started his ice cream business by borrowing $15 from his future wife Agnes. With it, he bought an ice cream truck, which had a flat tire one hot day in Hartsdale, N.Y. His ice cream partially melted, but he sold out in two days.

Carvel realized he’d do better with soft ice cream in a stationary location, and so the Carvel frozen custard shop was born. It thrived mostly in Connecticut, New Jersey and New York, where it had its headquarters. Later company headquarters moved to Farmington, Conn. Carvel ran the business for 60 years, micromanaging the advertising and requiring new franchisees to take an 18-day course at the “Carvel College of Ice Cream Knowledge.” He sold the company in 1989 to an investment firm. Carvel stores have since dwindled to a little over 400 from a peak of 865, and the company emphasizes supermarket sales rather than the standalone shops.

The Friendly’s restaurant chain also grew out of New England’s ice cream love affair. Brothers Prestley and Curtis Blake opened an ice cream shop in 1935, in Springfield, Mass. Five years later they opened another, with an expanded menu, in West Springfield. After World War II the company expanded rapidly, luring customers with its signature ice cream sundae.  The brothers sold Friendly’s to Hershey Foods in 1979, the first of several transactions. The company has struggled but still survives in the Northeast, Florida and South Carolina.

Another once-successful restaurant chain also has roots in New England. Schrafft’s began as a way for the Boston-based candy store to sell more candy, and the restaurants did well in New York City. Prominent on the menu was “Schrafft’s world-famous ice cream.” The Boston Herald’s indomitable photographer Leslie Jones took this photo of a wrecked H.P. Hood & Sons ice cream wagon in August 1921. The horse ran wild down Beacon Street in Boston, according to the caption. Here’s another look at a Hood wagon. It’s on display at the Owls Head Museum in Owls Head, Maine.

Hood had already been around for a long time. Harvey Perley Hood started the HP Hood dairy in 1846 in Charlestown, Mass. It took 101 years for Hood to introduce the iconic Hoodsie, a waxed cardboard cup containing half chocolate, half vanilla ice cream. It comes with a wooden spoon, which kids often sucked until they got splinters on their tongues. People who grew up in the Boston area hold a special reverence for the Hoodsie.

After the privations of the Great Depression, dairy farmers realized they could make money selling ice cream at roadside stands. With encouragement from the Dairy Council and trade publications like Home Farmer they built dairy bars along the highways.

Charles P. and Fredericka Hayward opened Hayward Farms’ first dairy bar in Milford, N.H., in 1940.  Later a second store opened in Nashua. Milk from the couple’s 150 cows was originally used to make ice cream. (Now the cows are gone.) During World War II, Hayward farms sometimes only opened for three days a week because of the sugar scarcity. The Shady Glen Dairy Farm Ice Cream Bar in Manchester, Conn., started when John and Bernice Rieg decided to diversify their farm. They bought a small cottage in 1948 and built it into an ice cream store with 47 seats. It was so successful they then opened another. As commercial clutter proliferated along highways, businesses began to rely on eye-catching architecture and signage to attract the motorist’s attention. The ice cream stand pictured below probably sprang up along the Berlin Turnpike, one of the great neon strips of the Northeast. The ice cream stand would have had to compete with 20 traffic signals and at least 200 businesses,  including diners, hot dog stands, motels, drinking places, bowling alleys, dance halls, petting zoos and 32 gas stations. 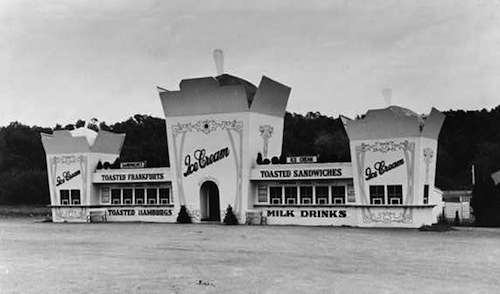 By the time John Margolies took this photo of the Milk Can in 1978, that kind of vernacular architecture was disappearing. Located on a busy highway, Route 146 in Lincoln, R.I., it New Englanders also claim they started the premium ice cream trend. If you’re thinking Ben and Jerry founded the crazy, you probably don’t live in Somerville, Mass. That’s where Steve Herrell started selling super-premium ice cream in 1973 at Steve’s Ice Cream shop. He created an extreme low-air ice cream and mixed, or “smooshed,” in crumbled candy like Heath Bars. Like most successful ice cream entrepreneurs, he eventually sold the business to a corporation.

You pretty much know the rest.

I think that HJ’s was on Rte. One when we first came through in 55.

For us HoJo’s was the place to stop when going to see my late Grandmother who lived in Rockland, Ma. We would stop on the Mass. Pike. We also had a Hojo here in Bristol, Ct.

Hojo’s were the main resturants on the Mass. Pike. Bristol, Ct. where I live had on on Route 6.

The Milk Can Still stands on 146 in Rhode Island, although in decrepit condition. I wish someone would fix it up and reopen it.

Everything was toasted? Lol

Loved making ice cream on the 4th and my sons never let me forget how I killed my clematis plant by pouring the salted ice water on it when I was cleaning the bucket for making the ice cream!

[…] company in 1932 and they began delivering milk to homes on Aquidneck Island. The Rectors opened a milk bar in 1940 in Middletown, where the company's flagship restaurant and plant are still […]

[…] the stores operating. But he soon stumbled on a new concept. He persuaded a businessman to build a dairy bar/ice cream stand in Orleans, Mass., on Cape Cod. They agreed Howard Johnson would supply the name and the products […]

[…] During the war he belonged to the Army of Occupation and saw almost no action. In Paris, he wrote to a friend, he had little to do but drink lemonade and eat ice cream. […]

[…] company in 1932 and they began delivering milk to homes on Aquidneck Island. The Rectors opened a milk bar in 1940 in Middletown, where the company’s flagship restaurant and plant are still […]