Every year for two hours at Christmastime, the town of Stockbridge, Mass., turns itself into a Norman Rockwell Christmas painting.

The Town of Stockbridge, Mass., has reenacted Rockwell’s 8-foot-long painting, Stockbridge Main Street at Christmas, for nearly three decades as part of its annual holiday celebration. For two hours, the street is closed to traffic. As in the painting, vintage automobiles line up across from the red brick Town Hall, Williams and Son Country Store and the 240-year-old Red Lion Inn. An iconic Norman Rockwell Christmas painting, ‘The Truth about Santa.’

Some of the people in the living Norman Rockwell Christmas painting once modeled for him. Recently retired police Chief Rick Wilcox posed as a Boy Scout for Rockwell when he was a kid. He didn’t make it into a painting, but his brother did. His grandfather posed for the clerk in Marriage License, but Rockwell went with someone else (Jason Braman, who owned the town’s department store).

Young Scotty Ingram posed as the boy devastated by the discovery of a Santa suit in his father’s drawer. The Truth About Santa appeared on a Saturday Evening Post cover in December, 1956. Ingram’s whole family posed for Rockwell.

The painter found his iconic Santa while on vacation in upstate New York. John Malone hosted Rockwell while he swam, fished and relaxed on his porch. Malone became a father figure to Rockwell and a perennial model as Santa. 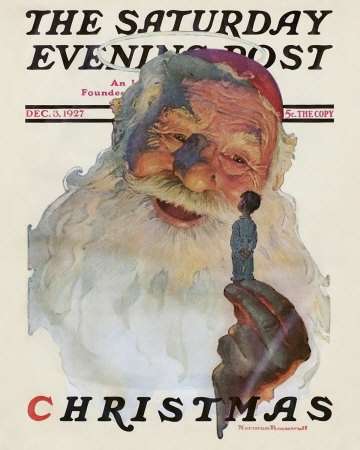 Stockbridge’s Main Street hasn’t changed much since Rockwell moved there from Vermont in 1953. He was 59 years old, a well-established artist with the Four Freedoms, Rosie the Riveter and dozens of Boy Scout calendars and Saturday Evening Post covers behind him. He would live in Stockbridge for the next 25 years until he died in 1978 at 84.

Upon his arrival in Stockbridge, he set up his studio above the meat market. He knocked out the window and replaced it with a $5,000 picture window that gave him a steady northern light. In Stockbridge Main Street, there’s a Christmas tree in that window.

The modern recreation isn’t exactly the same as the scene in the Norman Rockwell Christmas painting. He painted a nightscape, and the reenactment takes place in the afternoon. The Red Lion Inn was closed; in real life, it’s open in the winter now.

The cars aren’t exactly the same – but then again, Rockwell painted cars from two different eras. He started the painting in 1956, but stopped work on it for a while. When he took it up again in the ‘60s, he put two small late-model cars next to the ‘50s models he’d already painted. He didn’t finish Stockbridge Main Street at Christmas until 1967.

That was the year WBAI-FM first played Arlo Guthrie’s recording of Alice’s Restaurant – which mentions the real restaurant Alice Brock ran in Stockbridge. The police officer in the song, Chief William J. Obanheim, had actually posed for Rockwell for his painting The Jury and a small pencil illustration for an insurance advertisement.

The painting now hangs in the Norman Rockwell Museum just a few miles outside of town.

In 2020, the town didn’t gather for the Stockbridge Main Street at Christmas event because of the COVID-19 pandemic.  The town did gather during the first week in December 2021 and again in 2022.

This story about the Norman Rockwell Christmas painting was updated in 2022.

I have a canvas print of the town that I bought years ago.

[…] the time she died in 1875, Henriette Desportes was best known as a minister’s wife in Stockbridge, Mass. But behind that staid image was the story of a scandal that helped topple the King of […]

A Victorian Property Featured in an Iconic Norman Rockwell Painting Is Now on Sale | Smart News - JustWowMeHub November 7, 2019 - 9:15 am

[…] residents recreate Rockwell’s iconic scene each December with a festival now in its 30th iteration. Throughout the occasion, Primary Road is […]