Martin Luther King Jr. spent plenty of time in New England, and not just giving speeches about civil rights. He worked in Connecticut over the summers as a teenager, and he earned his Ph.D. and courted his wife in Boston. Here are eight facts you may not know about Martin Luther King’s impact on the region and its people.

1. A phone call to his wife helped elect JFK.

Martin Luther King, Jr., wanted to get out of a Georgia prison for protesting a segregated restaurant.

Kennedy called Georgia’s governor and asked him to try to free King. He also called Coretta Scott King to show his sympathy. The governor got Martin Luther King released, and word of Kennedy’s phone calls spread throughout the black community.

Many attributed Kennedy’s victory to those telephone calls.

Ironically, Martin Luther King had a better relationship with Richard Nixon than he did with Kennedy.

2. Boston was the 2nd home of Martin Luther King Jr.

He called Boston his “second home,” because he had lived in the South End as a graduate student at Boston University. He also courted Coretta Scott while she attended the New England Conservatory of Music. 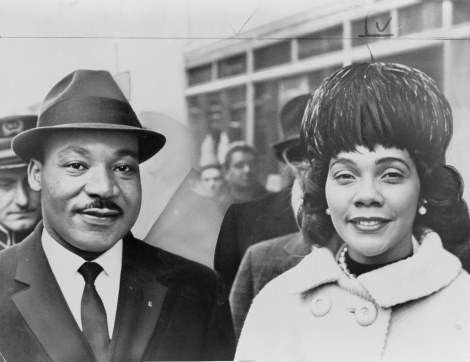 3. He spent summers in Connecticut.

In 1944, he worked in the tobacco fields to earn money for his tuition at Morehouse College. The school had an arrangement with Cullman Bros., which hired Morehouse students to work through harvest.

Young King (who then went by his birth name, Michael) found the experience liberating. He could worship with white people in church, eat in the same restaurants and sit in the same train car.

He returned three years later for another summer. 4. He spoke at many New England colleges.

In 1964, Springfield College gave him an honorary degree. The FBI pressured the college’s president, Glenn A. Olds, to cancel the invitation to speak at the commencement. Olds held his ground even though it cost the college a potential $1 million contribution.

5. A gift to his widow disqualified a New Hampshire racehorse.

The New Hampshire thoroughbred Dancer’s Image won, then lost, the Kentucky Derby in 1968 because his owner supported the civil rights movement. Peter Fuller, who owned Dancer’s Image, said resentful white Southerners stripped him of his prize.

The horse had won the Derby on May 4, 1968, a month after King’s assassination in Memphis. Two days after King died, Fuller gave $62,000 won by Dancer’s Image to his widow.

Three days after Dancer’s Image won the Kentucky Derby, Fuller had to return his purse. The racetrack claimed the horse tested positive for a banned substance. Fuller maintained to his death they’d framed him because of his gift to Coretta Scott King. Martin Luther King and his family arrive in Montgomery from Selma, March 1965

6. The KKK murdered a Boston minister after Selma.

A Boston Unitarian-Universalist minister, James Reeb, joined King’s second march in Selma, Ala., in 1965. The Ku Klux Klan beat him savagely that night, and he died two days later.

King held a news conference to denounce the “cowardly” attack.

King during a 1964 news conference.

The special assistant for civil Rights, Harris Wofford, escorted King to the family quarters, where Kennedy had asked to meet him. They entered a small elevator, but it went down instead of up.

When the elevator doors opened in the basement, First Lady Jacqueline Kennedy – in blue jeans — got on. Wofford introduced them, and she said, “Oh, Dr. King, you would be so thrilled if you could just have been with me in the basement this morning. I found a chair right out of the Andrew Jackson period–a beautiful chair.”

King’s comment after she left: “Well, well—wasn’t that something.” James Brown appeared in Boston just after King was assassinated.

After King’s murder, riots broke out in more than 100 U.S. cities. Boston remained relatively peaceful because of the legendary James Brown concert at Boston Garden the next day.

Boston Mayor Kevin White prevailed on Brown to let WGBH rebroadcast his performance. Throughout the show, between songs, the singer talked about Martin Luther King and urged the people to stay calm.

WGBH rebroadcast the show, over and over, and thousands of angry young people stayed home. The next day the local news media gave James Brown credit for keeping the peace.

This story about Martin Luther King Jr. was updated in 2023.

Image: King at a press conference By Marion S. Trikosko – This image is available from the United States Library of Congress&#039;s Prints and Photographs divisionunder the digital ID ppmsc.01269.This tag does not indicate the copyright status of the attached work. A normal copyright tag is still required. See Commons:Licensing for more information., Public Domain, https://commons.wikimedia.org/w/index.php?curid=17218777.

250 Years of Tales From the Roger Mowry Tavern

The Time Vermont and N.H. Went to War Over (What Else?) Cows

River Gods of the Connecticut River Valley Create A World of Their Own - New England Historical Society March 10, 2018 - 9:15 am

[…] in onions.   Hadley, Hatfield and Deerfield concentrated on livestock. The River Gods of Glastonbury, Hartford and Windsor grew tobacco. And Enfield, Suffield, Longmeadow and Northampton grew so much wheat they earned the designation […]

[…] picture included child labor in rural New England, such as in Connecticut's tobacco fields and on Western Massachusetts farms. Hine photographed eight-year-old Jack driving a load of hay and […]

[…] on seasonal labor from college campuses in the South, including Morehead College, which sent a young Martin Luther King, Jr., to Simsbury.  They also used local child labor. World War II and the passage of child labor laws forced […]

[…] leader. Assassins’ bullets had taken the lives of his brother, President John F. Kennedy and Dr. Martin Luther King, Jr.  All three men led the struggle against discrimination and poverty, though to varying […]

[…] means nothing without economic justice. At least that’s what Randolph – and his protégé Martin Luther King, Jr., thought. The 1963 March on Washington – Randolph’s idea – was, after all, the March for […]

[…] and Sophia played huge roles in shaping the writer, naturalist and author who influenced Gandhi, Martin Luther King, Jr., and Nelson Mandela. Helen believed in him when others thought him a kook. He and Sophia grew so […]