Percy Spencer had only a fifth-grade education, but that didn’t stop him from earning patents crucial to winning World War II – and to cooking dinner in minutes.

He was the fourth person hired at a new company called Raytheon in Cambridge, Mass. He had an itch to learn and the temper of a bull moose in mating season.

In a 1958 Reader’s Digest article, an MIT scientist suggested Spencer benefited from his lack of schooling: Percy Spencer was born July 19, 1894, in Howland, Maine. His father died when he was 18 months old, and his mother sent him to live with his aunt and uncle. His uncle died when he was seven. Young Percy and his widowed aunt traveled around New England, earning money from her weaving and whatever odd job he could pick up.

He left school after the fifth grade and got a job in a spool factory when he was 12, working from sunrise to sundown.

At 16 he learned the owner of a paper mill planned to electrify the plant. Intrigued, Percy Spencer applied for one of three job openings as an electrician. He learned about electricity by studying at night and by trial and error.

In 1912 he read how wireless radio operators directed the ship Carpathia to rescue Titanic passengers.

He decided he wanted to be one so he joined the Navy, where he learned about radio technology. “I just got hold of a lot of textbooks and taught myself while I was standing watch at night,” he said. He also taught himself trigonometry, calculus, chemistry, physics, metallurgy and radio technology.

The Navy discharged him honorably at the end of World War I.

Vannevar Bush and Laurence Marshall, two engineers who’d roomed together at Tufts University, had started the American Appliance Company in Cambridge, Mass. They aimed to manufacture a refrigerator with no moving parts. The idea didn’t work, so in 1924 they decided to make S gas rectifier vacuum tubes invented by Charles G. Smith, their first employee. The rectifier tube eliminated the need for two batteries to operate a radio. The tubes transformed radios into affordable household appliances from complicated hobbyist experiments. Soon, every home had to have one.

In August 1924 Marshall and Bush renamed the company Raytheon, a portmanteau word meaning ‘beam of light from the gods.’ The company would eventually move to an old button factory in Waltham, Mass.

Percy Spencer was hired as Raytheon’s fourth employee in 1925. He went to work making vacuum tubes. By 1939, he was a top-flight expert in vacuum tube design. He was so adept at it he “could make a working tube out of a sardine can,” said a Massachusetts Institute of Technology physicist.

Spencer did a lot for Raytheon. His expertise in radio tubes helped win a government contract to produce radar combat equipment for MIT’s Radiation Laboratory. A priority for the military was the production of magnetrons, which generated the radio signals used in radar.

Raytheon was producing 17 magnetrons a day. Percy Spencer figured it was faster to stamp and solder magnetron parts than to machine them, and production rose to 2,600 a day. Raytheon produced 80 percent of the magnetron tubes used in U.S. and British radar during the war. U.S. bombers were equipped with his radar sets, powerful enough to spot U-boat periscopes from the air.

During World War II, Spencer’s staff at Raytheon increased to 5,000 from 15. For his work, the Navy awarded him the Distinguished Public Service Award. 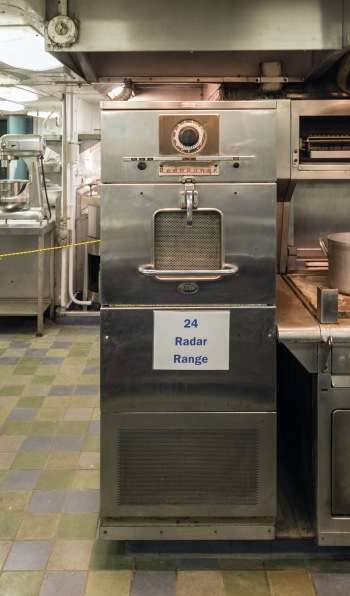 One day at work in 1945 Spencer was standing next to an active magnetron when a candy bar in his pocket melted.

Intrigued, he sent out for unpopped popcorn. When it popped in front of the magnetron, he realized that microwaves could cook food.

From there he went on to develop the microwave oven by adding a high density electromagnetic field generator to an enclosed metal box.

The first microwave oven was 5’6” tall, weighed 750 pounds and cost as much as $3,000. It was too big, too expensive and too scary for consumers to use, but found its way to restaurants, railroad cars and ocean liners.

“The early microwave ovens, and we had one, were as large as a refrigerator, would take twenty minutes to warm up before you could cook anything, but they were 10 times more powerful than anything you can buy today, so a potato was cooked in thirty seconds,” said Rod Spencer, Percy’s grandson.

Percy Spencer insisted Raytheon’s chef cook with the oven. But its shortcomings were evident: It didn’t brown meat or crisp French fries. The cook quit.

“The microwave oven eventually became known as Raytheon’s largest commercial failure, and the reason why was that like so many other failures, they saw the cool technology but they didn’t understand the market,” Rod Spencer said. 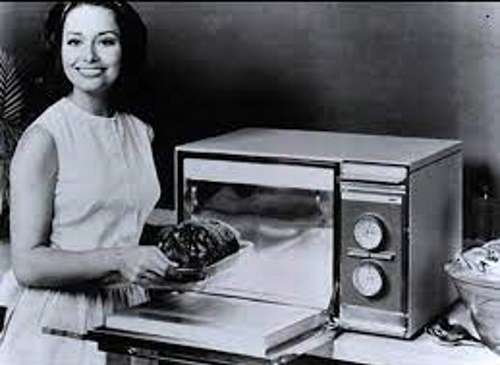 Microwave ovens eventually shrunk down to countertop size. In 1967 the first relatively affordable microwave oven went for sale at $495. By 1975 more sold than gas ranges.

Percy Spencer received $2 for his patent for a microwave oven – the gratuity Raytheon awarded all employees for patents obtained by the company. Over his lifetime, the lightly educated orphan from Maine earned 300 patents.

The Legend of the Ghost Ship Palatine

[…] and Eye Company and he held a patent on a ‘Mode of Fastening Hooks and Eyes upon Cards’ he had invented, which allowed the hooks and eyes to be easily packaged and […]

[…] device that powers radars. He noticed a chocolate bar in his pocket had melted. Later that year, he filed a patent for the first microwave […]

[…] day at work in 1945 Percy Spencer was standing next to an active magnetron when a candy bar in his pocket melted. Later that year, he […]