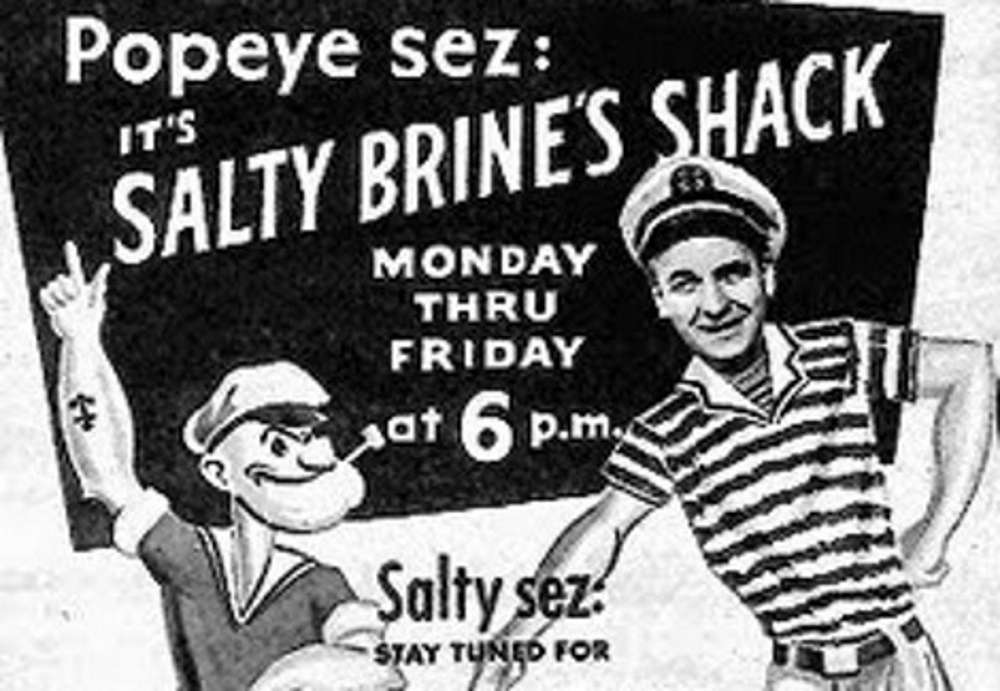 Back in the day, broadcasting legend Salty Brine was as much a part of Rhode Island life as Del’s Lemonade, coffee milk and free parking at the beach. Baby Boomers who grew up in the Ocean State ran home from school to watch Salty’s Shack, co-hosted by Jeff the collie and featuring Popeye cartoons, The Little Rascals and the Three Stooges.

When it snowed, they anxiously listened to Salty Brine announce school closings on WPRO-AM. Two towns in northwest Rhode Island, Foster and Glocester, were inevitably snowbound. Salty Brine lumped them together as “No school, Fosta-Glosta.” Some Rhode Islanders still believe there’s a town out there called Fosta-Glosta.

For 51 years, Salty Brine brought enthusiasm and cheer to WPRO as a disc jockey, newsman and talk-show host. For legions of Rhode Island children, it was an unforgettable experience to get his autograph, shake his hand or pet Jeff.

He was born Walter Leslie Brine in the Boston suburb of Arlington, Mass., on Aug. 18, 1918, the youngest of four children. His parents came from Nova Scotia. His father was a carpenter.

He always loved the ocean, hence the nickname. His friends called him ‘Walt the Salt.’

At the age of nine he lost his leg trying to jump on a freight train near his home. The accident turned out to be providential. It kept him out of World War II. He landed a job with WNAC-AM in Boston, after graduating from Staley School of the Spoken Word in Brookline in 1941. (John F. Kennedy and James Michael Curley polished their speaking skills there as well.) He also worked at WESX in Salem and WCOP in Boston until 1942, when he got the WPRO job that lasted 51 years. Generations of Rhode Islanders woke to the sound of Salty Brine telling them to “Rise and shine with Salty Brine.” In summer he warned against sunburn with his line, “Time to turn so you don’t burn.”

Advertisers loved him because his product announcements boosted sales. He sold furniture and mattresses with the line, “Nobody beats Cardi’s! No-ho-ho-body!” He sold snacks, too, with perfect pronunciation: “Maid Rite Poe-tay-toe Chips!”

Salty’s Shack went on the air, live, from 1955 to 1968. Each show ended with his signature line, “Brush your teeth and say your prayers.”

Many a Rhode Island Baby Boomer cried when Jeff died in 1961. Salty got another collie, Little Jeff, from the pound. One woman said she’s still pining.

“Not long after I was married way back in the 1970s, my husband shook me awake in the middle of the night with a concerned look on his face,” she wrote at the Quahog.org blog. “Evidently, I had been carrying on—in my sleep!—about “Jeff.”

“After I grumbled and cursed and hemmed and hawed a bit, I managed to open one eye and say, “He’s Salty Brine’s dog, you idiot!” after which I promptly rolled over and went back to sleep.

“Needless to say, that man and I are no longer married.” Salty Brine was sensitive to people with disabilities. He spent a lot of time in hospitals visiting kids who lost limbs and made many, many appearances for charity.

On air he was colorful, cheerful and comforting.

In the 1940s, one woman called in frequently to request songs. She told him her woes about the diapers frozen on the line. She had a new story about the diapers every day, so Salty began calling her the Diaper Lady.

During the blizzard of ’78, he stayed at the station around the clock to give the weather news.

Once, after a weather report from Nancy Byers, Salty announced he had just received a message from a viewer and read it:

In 2003 the joke was on him. In a locally famous broadcast, an elderly caller asked disc jockey Steve Kass, “What’s this I hear about Salty Brine being accused of sexually assaulting a 19-year-old woman… he’s married and he’s 84 years old!” Kass replied that it was Kobe Bryant. She then replied, “What?”

On Salty Brine’s 35th anniversary with WPRO, the radio station on Wampanoag Trail was named the Brine Broadcasting Center, nicknamed the Brine Shrine.

In 1990 a beach near his home was renamed after him.

Salty Brine retired from WPRO in 1993 and lived long enough to see his beloved Red Sox win the World Series. He died at his home in Narragansett, R.I., on Nov. 2, 2004.

His only child, Walter L. “Wally” Brine, co-hosted the Loren and Wally Morning Show on WROR-FM in Boston until retiring in 2019.

With thanks to Quahog.com and Rhode Island Radio By John Rooke. This story about Salty Brine was updated in 2022.

“It’s four bells and you know what that means!”

I grew up in Watertown, MA and watched Salty on a snowy channel 12. I entered a contest he had and won a Remco signal gun! It lit up and went “Beep-Beep” when you pulled the trigger.

Thank you for the ‘thank you’!

[…] Rhode Island has but one covered bridge on a public road: The Swamp Meadow Covered Bridge in Foster, R.I. […]

[…] are many reasons to take note of the history of Foster, R.I. Home to one U.S. senator, Theodore Foster, and birthplace to another, Nelson Aldrich, it has had […]

[…] My brothers and I would wake up to a blanket of white the following morning.  We’d listen to 63 WPRO and Salty Brine to hear those magical words of “No School Coventry!” […]

You Don’t Have To Be Italian To Love RI Chicken Family Style - New England Historical Society April 2, 2018 - 7:11 am

[…] “Salty’s Chair”, at Salty Brine Beach in Narragansett, RI, paying homage to the iconic Rhode Island WPRO radio host Salty Brine who was famous for, among many other things, calling snow days in “Fosta – Glousta” on […]